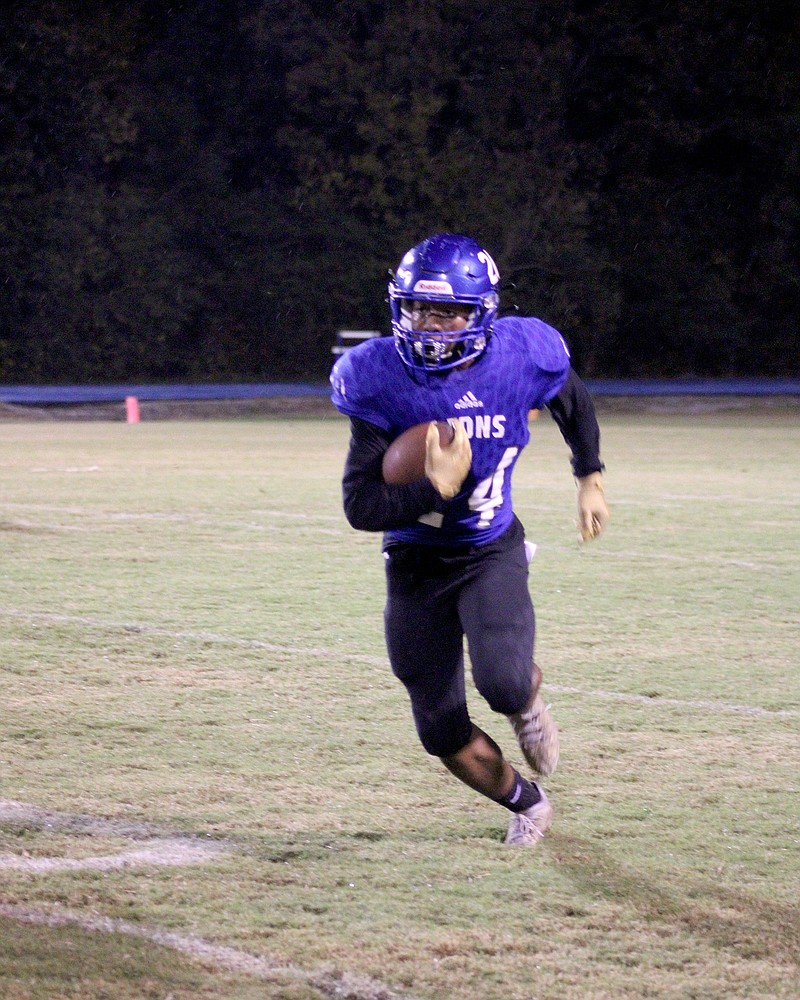 Jessieville's Brentenn Johnson (24) runs the ball upfield against Bismarck on Oct. 1. The Lions travel to Rosboro to face Centerpoint Friday. - Photo by James Leigh of The Sentinel-Record

Jessieville is set to face its toughest competitor yet as the Lions travel to Rosboro to face the Centerpoint Knights.

"Last week, you know again, it was just kind of a 'We're going to take what the defense gives us,' and their linebackers were really keying on Matt (Huff)," Jessieville head coach T.J. Burk said. "And they tried to take him out of the game as far as our run game goes, and so we were able to run the ball with Carson (Hair) a little bit more and then take advantage on some of those aggressive linebackers and throw it behind them a little bit. You know, our game plan is based around those two guys obviously, but if the defense gives us something else, then we'll take something else."

Hair was 6-for-10 passing for 127 yards and two touchdowns while rushing 11 times for 143 yards and two more scores. Huff was limited to just 69 yards on 10 carries. Carson Freeland was the Lions' most successful receiver with two catches for 105 yards and a score.

Burk noted that Centerpoint will be a tough competitor.

"They were moving the ball really well, and then their quarterback actually got hurt in the third quarter," he said. "So that hurt them a little bit, and they had some bad breaks on some turnovers, just the ball didn't bounce their way. But to me, I think they are the best team that we've seen on film so far."

Burk said that one of the toughest things that the Lions will have to contend with this week is the fact that the Knights are a balanced team offensively.

"The toughest thing is going to be trying to stop them," he said. "They're really balanced offensively, so we've got to stop the run and the pass. They've got three receivers that can really run and go get it, and then the running back and the quarterback can run, so we've got to stay disciplined on defense and make sure that we tackle when we get to the ball carrier."

The Knights also feature a large and physical offensive line.

"They're big up front, and they're very physical, so they're gonna fire off the ball and try to move people," Burk said. "And they're good in the back end, too, so when their backs and quarterbacks find a hole, they're gonna hit it hard, and it's gonna be a challenge to stop them for sure."

Defensively, Centerpoint is going to be ready to play as well. The team runs a 3-4 defense that is very aggressive.

"They like to blitz, and they're really good at what they do," Burk said. "Their frontline plays technique very well, and they've got a couple kids up there that can really make some plays. And then in the secondary, they're good in pass coverage, and they create turnovers by flying to the football and getting it out of ball carriers' hands and then getting interceptions as well."

The Lions have had some issues with ball control at times this season, but Burk emphasized that against a team like Centerpoint, the team cannot turn the ball over without expecting consequences.

Burk said that the Lions are as healthy as they can be at this point in the season.

"We're actually pretty healthy right now," he said. "We didn't lose anybody last last Friday night, so we're going in full strength. ... There's a difference in being hurt and being injured. Everybody's hurt a little bit with bruises and sore, you know, but that's part of playing football and that's what makes it one of the greatest sports on Earth. It makes you tough as a man, too. So you know, everybody's dealing with that, and it's just something that you've got to overcome and play through."

Kickoff at Diamond Bank Stadium is set for 7 p.m.