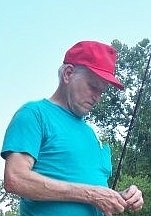 Mel was born and raised in Mena, Ark. In his teens, his family moved to Magnet Cove, Ark., and later to Hot Springs.

He was an avid football, basketball and track athlete, playing both in high school and college at Henderson State University and the UofA Fayetteville. He loved music and played bass in several bands throughout his life. He enjoyed being in nature, whether it was hunting and fishing with family and friends or working in the garden with his daughter. He also enjoyed seeing the smiles on people's faces when giving away vegetables from his garden to neighbors, family and friends. He loved reading, playing dominoes or rummy with his children, Razorback football, and most of all, helping those around him. Melvin never met a stranger and was an avid story teller.

Mel retired as maintenance lead at UAMS. Throughout his life he worked as route manager for ADG, owned a number of businesses, including Beneficial Termite and Pest Control, three pawn shops, Jimbo's Restaurant, MandM Hotel, and the Sundown Lounge in Hot Springs. He also worked as a mechanic for years alongside one of his best friends, Charles Langston, at Langston's Auto Repair.

A memorial service will be held at a later date.

In lieu of flowers, the family is asking for donations to be made to a memorial fund in his name: