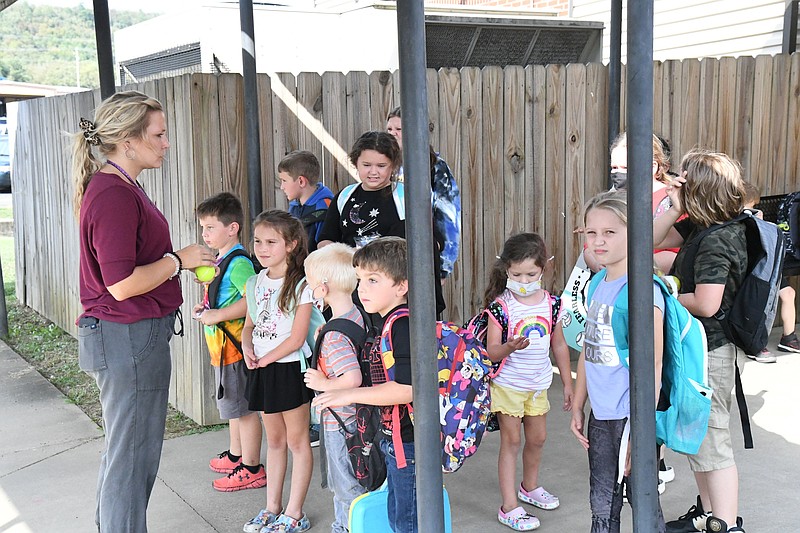 Teacher Rebekah Dixon stands with Cutter Morning Star students as they wait to be picked up on Wednesday. - Photo by Tanner Newton of The Sentinel-Record

The Fountain Lake, Mountain Pine and Cutter Morning Star school districts joined Jessieville School District this week in not requiring masks to be worn on school campus by students and staff, although each district is still highly recommending face coverings be worn.

While no longer requiring masks in the classroom or around campus, Cutter Morning Star is still requiring they be worn while on school buses. Hot Springs, Lakeside and Lake Hamilton still have mask mandates in effect, though their respective school boards are scheduled to revisit the issue during their monthly meetings next week.

The Cutter Morning Star School Board, after extending its mask mandate at the Sept. 28 board meeting, voted to remove the mandate Tuesday night, except for on buses, for the time being.

The Fountain Lake School District, which enacted its mandate in late August after a recent uptick in COVID-19 cases and quarantines among staff and students, approved the removal during Monday night's monthly school board meeting.

"We have been monitoring the CHI (St. Vincent) data point that shows the number of cases per 10,000 in the school district boundary, and so we've been kind of watching that trend line along with other local information, as well," he said.

Though Fountain Lake's number of active cases jumped from two on Monday to six Tuesday, Murphy said the district had only seen one to two active cases for the last, almost three weeks.

"We currently have six active cases," he said. "That's how quickly things can change. Yesterday we had two. We have a very limited number of individuals quarantined currently, so that typically alludes to the fact that it's spreading within the home, not at school. But there was very little (rise in cases)."

Murphy said the board voted unanimously to approve the mandate removal while continuing to monitor the number of cases to determine if any further precautions need to be taken based on the future caseload. When asked if the board may revisit the mandate issue in the future, Murphy said yes, but that it is dependent on how the court system rules.

"I would say that is very dependent upon additional county court cases that may be occurring across the state," he said, noting the injunction to allow districts to implement the mandate for a mask policy is going to be ruled upon at some point.

"But there has been areas of the state, I think in Benton County, where a county judge upheld the request and said it was no longer that it could be mandated," he said. "You begin to see mixed reaction from the judicial system on where this thing falls out. You know, until we see a significant increase in the number of cases, we're probably going to remain with an approach that it would be highly recommended for those individuals to wear a face covering as needed versus a mandate."

Speaking more specifically, Murphy said if the district goes above 1% active cases, or approaching 20 to 25 cases among the student population, then the school board would reconvene and evaluate the matter.

"But it really will have to, in my opinion, exceed where we were at last time -- knock on wood -- and hopefully we won't see in the future," he said. "Right now what we're seeing is a pretty significant downward trend line and everybody just needs to continue to do their part for that to occur. And it could be that it's running its course, too. I mean, individuals that had COVID, have been vaccinated for COVID ... there may be another variant, who knows what the winter's going to hold?"

The Fountain Lake School District has seen an increase in the number of voluntary vaccinations for COVID-19 among students and staff, which, Murphy notes, has helped their quarantine numbers. Among those eligible, as of Tuesday, 52% of the overall student population has been vaccinated and roughly 75% of the employee base.

Murphy said since statistics show most people hospitalized because of COVID-19 are yet to be vaccinated, while the vaccine may not totally prevent one from contracting the virus, it is certainly minimizing the degree of health-related concerns and long-term implications of the virus.

"So we're still very much trying to educate our community on the importance of becoming vaccinated," he said. "We feel like that is a tool that we have that allows for our staff and student population to have a safe environment to go to school in."

Murphy said they will continue to promote vaccinations with educational awareness, but again stressed it is voluntary in nature.

"There is this misunderstanding because of the position of the federal government regarding vaccines that local entities are following in that line based on the employee base and so we're not under that federal obligation and at this point in time we are fostering and promoting a voluntary approach to both COVID vaccine as well as we're getting ready to have a flu clinic vaccination on campus in our health center," he said.

"So, I mean, but it's voluntary. Just like the flu shot has been voluntary every year since we've been offering it. We just continue to do the very best we can to provide a safe learning environment for all students."