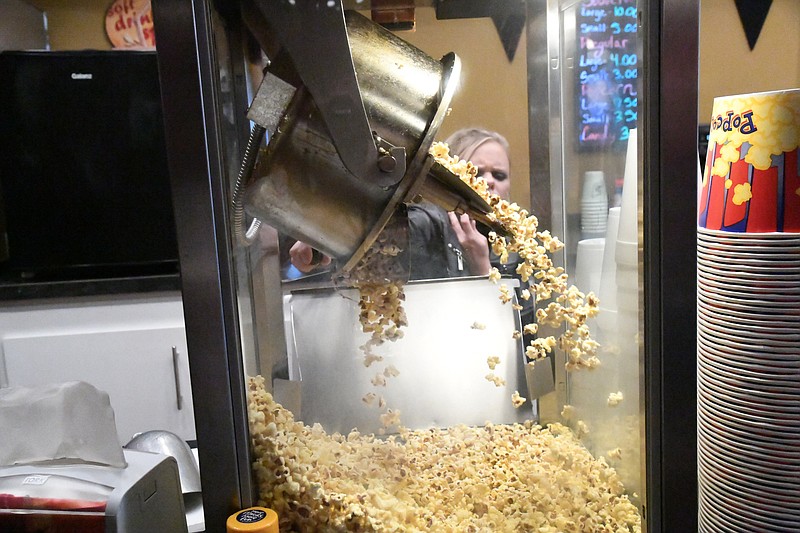 Fresh popcorn is prepared Thursday during the Hot Springs Documentary Film Festival at the Malco Theatre. Films will be shown at both the Malco and at the Arlington Resort Hotel & Spa until Saturday. - Photo by Tanner Newton of The Sentinel-Record

As the 30th annual Hot Springs Documentary Film Festival winds down to its final two days, its executive director expressed her happiness with this year's strong reception and ticket sales.

"It has been such a magical week," Jen Gerber said. "It started with such an amazing night with Tig Notaro in attendance with us on opening night last Friday, and then our opening-night block party where we took over Bridge Street.

"I was truly in awe of all the work that our volunteers and staff put into that opening-night party, which really set the tone for the opening week."

Gerber said the past week has been "a week of celebration, a week of the love of cinema and really a week of coming together to enjoy all the best of what Hot Springs has to offer."

As for attendance, Gerber said their ticket sales have been better than they may appear at first glance due to the festival's virtual component. This is the second year in a row they allowed the movies to be screened virtually outside of the festival's venues.

Films that have done particularly well have been the ones that focus on Arkansas.

"'Broken Wings' had a sold-out standing ovation at the end of their film. 'Forever Majestic,' which premiered on Tuesday, was the same reception. Such a warm reception," Gerber said.

"Those Arkansas films received so much love and it's been really a joy. It just reminds us of why we do this."

Gerber said with the success of the virtual screenings, they will likely continue to include them in future festivals.

"As long as the film distributors and filmmakers will allow us, we have absolutely loved having the virtual platform. We acknowledge we are still in a pandemic and not everyone feels comfortable making it to the films, but also maybe their schedule doesn't allow for them to make every single screening, so I've really enjoyed hearing everyone's planning as their working out what they're going to see in person and what they're going to watch at home on their own time," she said.

"I think it's allowed more access to our films, which I know that our audience is truly enjoying."

For their final two days, Gerber said they have several exciting things lined up. Today at 3 p.m., at the Malco Theatre, there will be a fireside chat with Dawn Hudson, the CEO of the Academy Awards.

The final two days "are really full. (Today) we have some incredible screenings but I think the biggest highlight, that I'm most excited about is that we have the CEO of the Oscars attending the festival," Gerber said, adding, "this is also her hometown; she's originally from Hot Springs."

"I really think it's going to be an amazing homecoming for her to come back to Hot Springs -- I've heard it's been 18 years since she's been home -- so certainly the city has changed tremendously since she was here last, but we're also excited to learn about her career trajectory. How did she get from growing up here in Hot Springs to being CEO of the Academy Awards? That's no small thing," Gerber said.

Hudson will also speak at the closing-night ceremony on Saturday.

Other upcoming events Gerber said she is looking forward to include a session of rooftop yoga at the Arlington Resort Hotel & Spa, and screenings of student films. Both of these will be held on Saturday.

During the summer, an HSDFF boot camp was held where participants made their own short films and these will be screened. "These films are all incredibly different. They show different corners of Arkansas and beyond and this is their world premiere and it's going to be a really big screening," Gerber said.

"One thing I would like to say that we haven't done enough is to just truly thank our staff and volunteers," she said.

"This festival has been the hardest logistical event we've ever produced and we have an army of volunteers that in the midst of a pandemic are still showing up and making sure everything runs smoothly. Our staff have been absolutely world-class and I'm so proud of how we've pulled together as a team to execute this festival," Gerber said.