Wolves ready for bout against Panthers 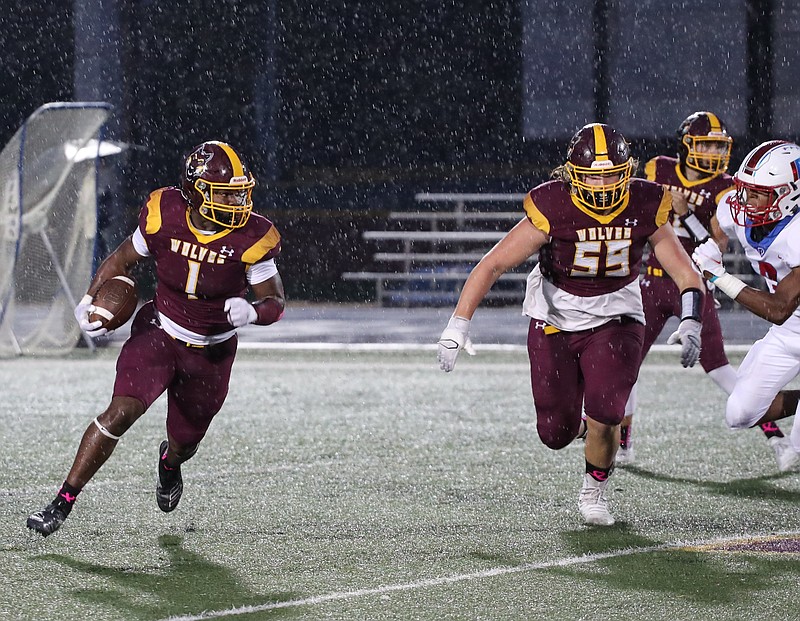 Lake Hamilton's Dylan Horton (59) blocks for Kendrick Martin (1) during an Oct. 1 game against Little Rock Parkview at Wolf Stadium. The Wolves travel to Siloam Springs tonight. - Photo by Richard Rasmussen of The Sentinel-Record

Lake Hamilton may have lacked emotion last week in a 42-32 homecoming win over Russellville, but the Wolves are geared up and ready to face Siloam Springs on the road tonight.

"You know, look at all the people that lost this weekend that probably shouldn't have -- namely Alabama," he said. "They lost to an (Texas) A&M team that got beat by Arkansas and Mississippi State, and so that tells me you got to be focused every week. And if you're not focused, you may get beat. I appreciate the kids' resolve to fight to the end, and you know, get us back in the game. They did some stuff early that kind of messed up our blocking, and then once we figured out what they were doing, we really took advantage of that."

Despite their record, the Panthers are still a "big and physical" team, Gilleran said.

"Quarterback's a really good runner," he said. "The running back's a good ball player. Defensively, you know, they're just big; they're not, you know, really fast, but they're big and physical. ... They just don't have a lot of speed. You know, offensively if we can stop the quarterback and running back, they don't -- he throws it around a little bit, but the receivers are not like -- you know, they're not going to run by you."

Siloam Springs runs a Spread offense, but they prefer to keep the ball on the ground.

"They're always in the gun, but they'll throw it around, too, you know," Gilleran said. "Some games they throw 30 times, and sometimes they run, just take what they can do. If they can't run on us, then they'll start chunking it around. He does a good job. That kid's a good quarterback. In the past, they've always had a couple kids that can really, you know, you'd have to really watch because they, you know, they were fast. Well, that's not the truth anymore -- at least this year."

Gilleran said that the key to a win this week will be controlling the line of scrimmage -- on both sides of the ball.

"It's not turning the ball over and then us controlling the line of scrimmage on offense and defense because if we control the line on defense, then he can't run it," he said. "I think that puts him in a bind throwing. And then, you know, if we can control the line on offense, then it's going to be a long game for them because if they can't stop us then they're gonna have to really -- you know, it's going to put them in a bind on trying to stop us on certain things."

Overall, Gilleran is pleased with where his team is at this point in the season.

"There's gonna be games that we don't play the best of our -- you know, that we're not playing with a lot of emotion," he said. "I thought we played hard, but we didn't play with any emotion, and you've got to play with some type of emotion to get excited about each week in that game you're playing. And we didn't do that. And so we've got to do a better job, and I think that woke some of our kids up to say,' Hey, you know, we got to do it.' We had a better week of practice. In the week before, Monday and Tuesday, we practiced bad. And I think the kids fixed that. They knew that they wanted to go undefeated and win the conference, and part of that is getting ready every week."

The Wolves are fairly healthy going into this week's contest. Jamarrion Byrd is the only player expected to be out this week.

"He kind of injured his knee, and we're just taking our time with him," Gilleran said. "So he may not play Friday. He's the only one. Everybody else is on board. Crutchmer's playing. He's actually better. I'm glad we played him, you know. He kind of loosened up his back and his shoulder, and I mean he said he's felt great all week."