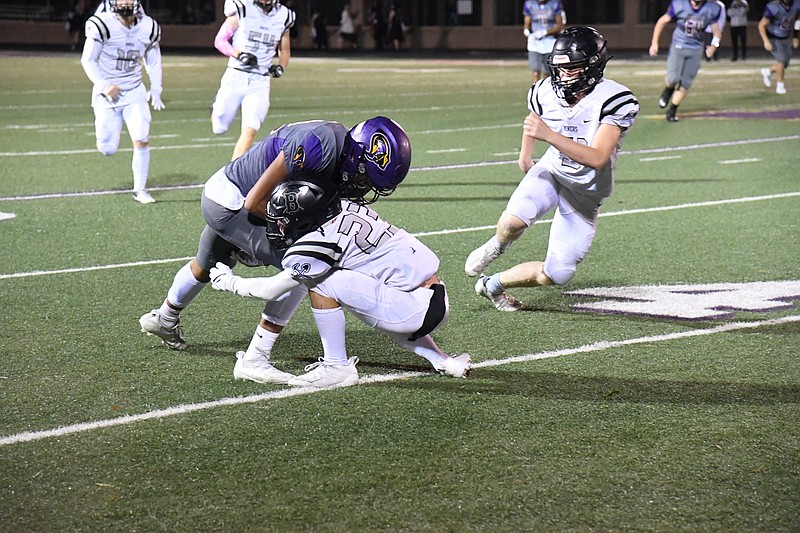 Fountain Lake's Kadin Hilton (22) is tackled by Bauxite's Russ McCone (23) during Friday's game at Allen Tillery Field. The Cobras defeated the Miners 27-7 to advance to 2-2 in conference play. - Photo by Tanner Newton of The Sentinel-Record

FOUNTAIN LAKE -- Behind a strong defensive performance on homecoming, Fountain Lake defeated Bauxite 27-7 to start a favorable run of 4A-7 contests that could see the Cobras earn the right to host a home playoff game.

Cobras quarterback Wesley Campbell accounted for just nine yards on the ground, but he registered two touchdowns on quarterback sneaks.

Bauxite (2-5, 0-4) struggled offensively during the contest as quarterback Hunter Ferrell went 16-for-29 passing for just 85 yards and one touchdown. Senior running back Devin Jones only managed to pick up five yards on the ground.

To open the game, the Cobras drove the ball well on their first drive, but on third-and-17 from the Bauxite 33-yard line, Campbell threw an interception over the middle to Zack Taylor.

After getting the ball back, Fountain Lake capitalized on the drive. After multiple carries by DeArmon and Abram Davis moved the ball just inches away from the goaline, Campbell ran it in and kicked the extra point for a 7-0 lead.

Stalling on downs at the Fountain Lake 42 yard line, the Miners gave the ball back to the Cobras early in the second quarter.

After a quick turn of speed saw Evan East advance the ball to the Bauxite 7-yard line, DeArmon took a carry to the left side of the field. Looking like he ran out of room, the senior dove for the end zone and was awarded the touchdown for a 14-0 Cobra edge.

Bauxite looked dangerous on the ensuing drive, driving the ball deep into Fountain Lake territory. In a bind on fourth-and-15, the Cobras bailed out the Miners with a pass interference call down the field. After some confusion on where to spot the ball, Bauxite was awarded a first down at the Cobras 10.

However, on the very next snap, the ball escaped quarterback Hunter Ferrell's hands and rolled all the way back to the Fountain Lake 46-yard line where Demarius Grant picked up the loose ball.

The Cobras attacked Bauxite with a flurry of passes that saw Fountain Lake advance to the Miners 14. Then, Campbell found Trystan Redifer through lots of traffic for a 14-yard touchdown pass.

Excited by his difficult reception, Redifer spiked the ball in celebration, and the ensuing penalty was enforced on the PAT. After a bad snap and hold, Campbell's extra point was short of the posts for a 20-0 half time advantage.

The teams struggled out of the break as both Bauxite and Fountain Lake opened the second half with turnovers on downs.

After a three-and-out by the Miners, it looked like the Cobras were building momentum, but Davis fumbled on a carry and gave Bauxite good field position at the Fountain Lake 44.

Unable to convert on the turnover, the Miners were gifted another turnover when Russ McCone picked off a Campbell pass. After the interception, DeArmon was flagged for a personal foul, and Bauxite started in prime field position at the Cobra 20-yard line.

It took just two plays for Ferrell to find Garret Oliver on an eight-yard pass to bring the Miners within 20-7.

Into the fourth quarter and after another turnover on downs by the Miners, Fountain Lake started just inside Bauxite territory.

The Cobras worked their way down to the 10-yard line and Campbell attempted four quarterback sneaks in a row. On his fourth attempt from the one-yard line and on fourth-and-goal, Campbell set the final as he was pushed into the end zone.