PODCAST: Health official: Flu vaccine more important than ever before 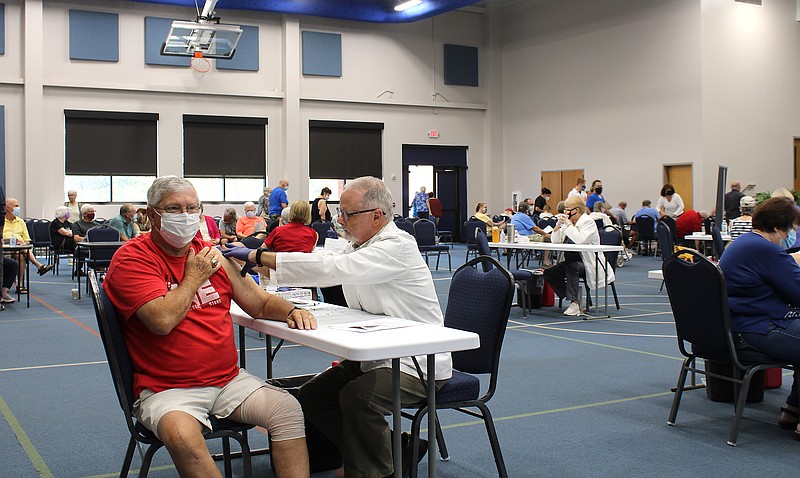 Following a year in which Garland County did not see a single death from the flu, some health officials are worried that this year will see a much more severe flu season than normal.

Garland County Health Officer Dr. Gene Shelby said Friday the flu vaccine will probably be more important this year than ever before, in part because of the lack of a serious flu season last year.

Shelby attributed not having "much of a flu season at all" in 2020 to people "wearing masks and doing the social distancing and not interacting as much as normal" which is "kind of off the table this year."

From what he's read, he said, "Some of the concerns about the worse, or a bad flu season, is the fact that there wasn't one last year and that there's no kind of leftover immunity from the flu season that would normally have occurred if we'd had a flu season last year. So I think those are two big factors in showing the importance of the flu vaccine to really try to make sure that we don't have a really bad flu season."

While the county has somewhat plateaued in the active count of COVID-19 cases, Shelby said the numbers are still higher than they were last year at this time and that it's going to be very important to continue practicing preventive measures to prevent infectious spread during the last part of October through the first half of November.

The flu virus, he noted, is very different from the COVID-19 virus, but the way it spreads is similar.

"It's spread through respiratory droplets and aerosol (particles) and so the things that we have been doing to prevent the spread of COVID, also are very effective in preventing the spread of the flu," he said. "I think it's very important for people to understand that the flu, even though it's been around a long time and it comes back in a little bit different form every year, can be a very serious, deadly infection."

In a normal year in Arkansas, "we'll have 120, 150 deaths per year and many hospitalizations, so while the flu vaccine is not 100%, because it's hard to pinpoint the development of a flu vaccine because there's so much variation in the flu virus from year to year, it's hard to really kind of pinpoint it," he said. "But there's a lot of research that's been done in the development of a more effective flu vaccine, and they are effective. They've highly studied the effectiveness of them in terms of preventing, you know, serious illness, and certainly you can still get the flu even though you've had the vaccine."

Shelby noted the myth is still circulating that people can get the flu from the vaccine, which has bled over into the discussion of the COVID vaccine, but he stressed the vaccines are not infective agents and it is totally impossible for them to cause an infection.

While the flu vaccine is known to be 50% to 60% effective in preventing one from contracting the flu, the COVID-19 vaccine is much more effective than was ever expected, he said. In those cases where one does contract the flu virus after having received the vaccine, the illness is not near as bad as if one had never received the vaccine. Shelby reiterated the fact that vaccinations are "just so important" in preventing the spread of these highly contagious respiratory viruses.

Researchers have made many strides in combating these viruses, and, in particular, the COVID virus.

"One of the things that's occurred over the last 18 months is that there's a lot more experience in dealing with acute COVID infections and one of the things that is occurring is that people that, a year ago, would have died from COVID, are now surviving because of the experience of treating with the new treatments that are coming out," Shelby said.

"And I think it is a real positive thing that they're coming out with some oral antiviral medications to also help treat the COVID. But, you know, that's one of the things that we've had over the last 30, 40 years -- a big emphasis on research and development of medications that are antiviral."

Shelby said a big impetus in the development of antiviral medications was the HIV epidemic during the 1980s, noting lots of money went into research and development of medications to attack the ability of a particular virus to replicate.

"That's why we've had such good luck in treating HIV, because we have an HIV clinic and I've seen dramatic changes because of the oral anti-HIV drugs," he said. "Of course, the different viruses from an HIV virus to a flu virus to a corona or COVID virus -- they're so much different that there's not much overlap between different medicines.

"You have to develop new medicines that target the replication cycle of the different individual viruses. So, you know, the research that has been ongoing for a number of years has allowed the development of new antiviral medications to combat these viruses. And so it's very heartening that we're seeing a development of safe and effective oral medications that will interfere with replication of the COVID virus," Shelby said.