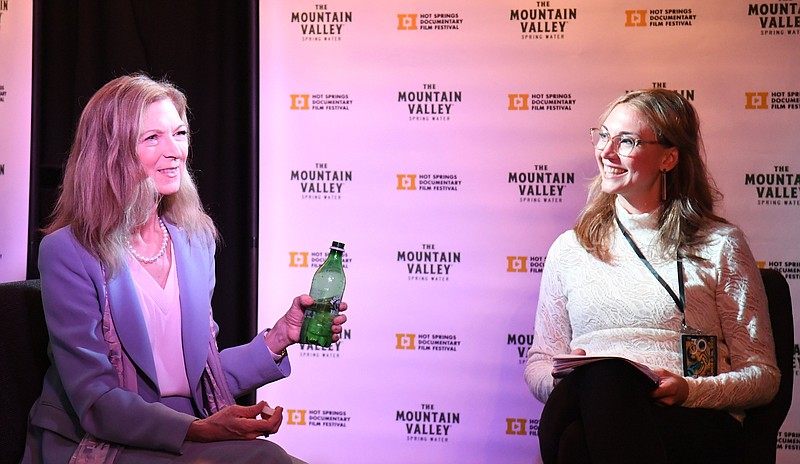 Coming home for the first time in 18 years, the CEO of the Academy of Motion Picture Arts and Sciences returned to her native Hot Springs to chat about her life and career for the 30th annual Hot Springs Documentary Film Festival on Friday.

Originally from the Lake Hamilton area, Dawn Hudson now serves as the CEO of the Academy Awards. On Friday, Jen Gerber, HSDFF executive director, spoke with Hudson at the Malco Theatre about her journey to Hollywood.

"This is a secret: If you take a job that no one else wants, sometimes it turns into something," Hudson said.

A graduate of Hot Springs High School Class of 1973, Hudson said she became interested in the arts while in college at Harvard.

"I didn't even know the arts existed as a profession until even almost out of college," Hudson said.

Hudson said that when she was a teenager, she became interested in politics. "In high school, and I don't know how this started, I just became very interested in socialism. I became a socialist and I thought that's how the world should be, everybody should make the same income and everyone should have the same opportunities," she said.

"I went to school and majored in politics," Hudson said.

"I thought we were going to learn how to change the world.

"I did love that but I thought 'I'm not sure this is going to lead to change in the world,'" she said.

"I felt like I was going to overthrow the government and change and have a new world order, and then I thought this is going to take a really long time ... I thought maybe arts could make this change ... maybe it's a faster way to get there," Hudson said. "I would not be surprised if most people who are documentations or a lot of filmmakers -- I think they may enter through the same door, which is how we make the world better," she said.

"I actually love the arts. I love acting, I love dance -- I used to dance as well -- and suddenly all those taboos in my mind suddenly -- it's not even taboos, it's more 'Oh, people actually make a living doing those things,' I didn't know that."

Hudson would eventually get a job with Film Independent in California. "I got a part-time job with Film Independent and then they went almost bankrupt. And so everyone was fired on Christmas Eve and then a couple months later one of the board members called me back and said 'Could you come help us please get us out of bankruptcy, kind of help us through this time,'" she said.

"I said 'Y'all still owe me back-pay. You owe me $705,'" Hudson said. After the board member cut her a check, she was back with the company

Film Independent is a company that helps support independent filmmakers, and they run the Independent Spirit Awards. "When I say that nobody wanted the job, literally it was just me and a part-time volunteer. There was no big job opportunity. It was not like people were vying for this job. It is is just something I felt passionately about, and then we built it up," Hudson said.

After leading Independent Film for 20 years, Hudson said she was asked by the Academy to do an interview to become their new CEO.

"It's funny because Film Independent is like a mini Academy in some ways. It's a membership organization, it supports filmmakers, and it has the Independent Spirit Awards ... and we had a film festival as well, the Los Angeles Film Festival, and I had been running that for 20 years when the Academy was looking for a new head of the Academy," Hudson said.

"They called me to interview, and to be honest, at that time I was really embedded the independent film world and I thought 'Those Academy people are kind of stodgy,' and I thought 'I don't know about this,'" she said. Hudson's sister then talked her into doing the interview.

"When I met some of the board, I just knew they were artists. They were all the same kind of conversations that I had with artists everywhere," Hudson said.

"We were talking about books, films and I said 'Wow, artists are artists everywhere.' They can be more successful and have a bigger career but all they're interested in is talking about film and art," she said.

"My goals and values aligned with their mission," Hudson said. These include making the Academy more inclusive. Gerber asked about this, noting that during her time with the Academy, they have faced the MeToo Movement and Oscar So White.

"You've had to navigate so many things and I would love to take a moment to focus on how you navigated the inclusion and diversity initiatives that you have been working so hard for," Gerber said.

"When I was first hired, there was a desire for that change," Hudson said. "You may not have seen it publicly, because it was internal, but there was 'We want what you're talking about' that was the direction we wanted the Academy to go in," Hudson said.

"When I was hired it was we will die of irrelevance and I mean just being so out of touch if we do not have a membership that is more representative of our population at large and of the talent around the US and around the world," Hudson said.

While these ideas and plans were being talked about behind the scenes, Hudson noted, "It's interesting, when there's a crisis that happens, you act with a lot more sense of urgency. When Oscars So White happened ... it just became a crisis that the board was like 'Oh, you know all those initiatives we kind of put on the back burner, let's bring them out right now, let's look at them right now, yes, let's do them right now.'

"It started in 2016, and we doubled our representation and gender and race in four years, nearly four and a half years," Hudson said about the Academy.

"This is amazing, I'm so proud of this festival. I mean 30 years and you have all of the sponsors here. Let me speak to all the sponsors everywhere how important it is to support this, not just the talent and the people who come here, but the audience who gets to gets to see these films. You're really opening hearts and minds. It's incredible," Hudson said.