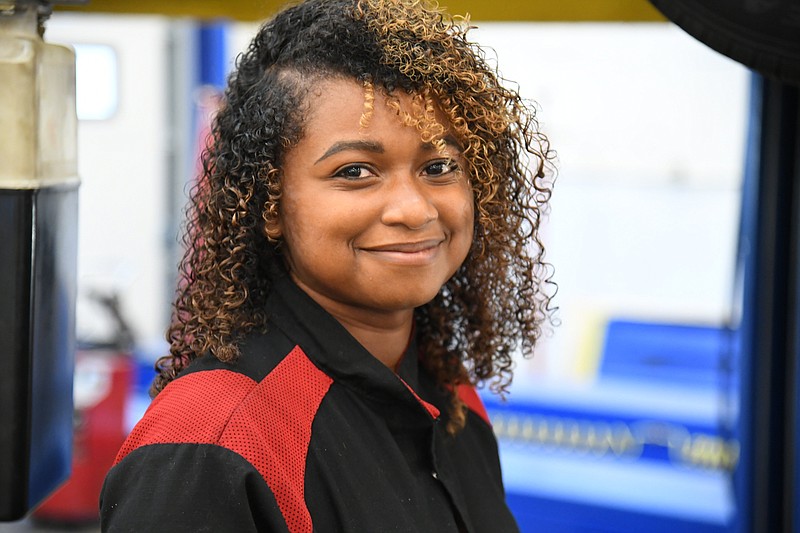 NPC students, and Toyota employee, Judaea Parks, stands in the shop at NPC.

For someone who grew up exploring the deep north woods of Maine with her older brother as a child, Judaea Parks was too busy immersing herself in the wonder of nature to ever realize that she would one day move to Arkansas and develop an interest in how automobiles worked as well as a love for working on them.

That love and interest eventually led her to study automotive technology at National Park College and a full-time position as a tire and lube technician at Gregg Orr Toyota in Hot Springs.

"Originally, I was born in the Bronx, New York, and my whole family's from that area," Parks said. "When I was about 7 months old, my parents decided to move out of the big city and choose a more simple lifestyle. And so we moved up to Maine where I basically grew up my whole childhood, up until I was 10."

Parks said that her family lived in the backwoods, where her father, a carpenter by trade, constructed houses. During the summertime when school was out, a young Judaea and her brother helped their father out on the job.

Parks soon became a pro at using a hammer, she recalled.

"Like, two hits and it's in there type of thing," she said laughing. "That was kind of my first taste (into working with tools). And then my older brother -- that's my only sibling, and he's five years older than me. But whatever he did, I wanted to do. And so I kind grew up as a tomboy in that aspect, especially because of an older brother and working on houses with my dad and everything."

Judaea's hammer and the other carpentry tools her father let her use were soon traded in for automotive tools after a move to Arkansas.

"We met a family and the father, he was a mechanic and they owned their own mechanic shop," she said. "My brother and I became really close with their children, so we used to go over there and play and everything and the father's like, 'Alright, help me with this,' type of thing. And that's when I got really interested in cars and working on cars."

What started out as just helping out on cars turned into full-on mechanic work for Parks by the time she was 16 years old. Even during her time of learning the ins and outs of automobiles did she yet realize that was something she wanted to make a career out of. As a line of work traditionally occupied by men, it did not really occur to her at first.

"When I was a teenager -- not so much," she said when asked if she always wanted to be a mechanic. "I liked it; I enjoyed it, but there were other things. I'm a huge animal lover, so in my mind as a teenager, I was like -- veterinarian. But then, you know, I started get into it and everything, and it was like, you have to put animals down and stuff. I was like, 'I'm gonna cry every time.' So I was like, 'I can't do that.' So then I thought about some careers and stuff and I was just like, 'Well, I really like working on cars. Why don't I make that a career?' And then that kind of built up, where I was like, 'Yeah, I'm definitely doing this as a career.' So yeah, and that was probably around (age) 17, almost 18, and then I went into college and did automotive."

Parks certainly has a lot to keep her busy, where in addition to working full-time at Gregg Orr Toyota, she is a full-time student at NPC until her graduation this coming May with a degree in Automotive Technology. Even with the prior experience she brought with her to college, Parks says she has learned a lot at NPC.

"The teachers are very understanding," she said. "They're there to help you and help you understand. I kind of struggled a little bit with like the electrical aspect of cars, but the teachers -- they were there every time I had a question. They were amazing, honestly."

While the course that dealt with electrical gave Parks somewhat of a pause at first, it also offered her a challenge that she did not shy away from.

"I'm usually like, 'I want 100s in everything,'" she said. "So I was really good in the other classes and I was just kind of slightly less so in that class, but I still passed and everything. And I understand it. I need a little more experience in that, in the electrical aspect of cars, but yeah, the teachers are great. They're very understanding. They very much help you along the way."

When asked what the most satisfying part of her job is, in addition to seeing the finished product, Parks said it's all about seeing firsthand the progress she is making.

"I want to say seeing the finished job, and, obviously, the cool cars coming in -- that's always fun," she said. "But I think when we do an inspection on them and when we find something wrong, a lot of times we'll get a more experienced tech and I'm like, 'Hey, can you check this out and make sure I got this right?' And then when they tell you, like, 'Yeah, you have it spot-on,' that's very satisfying because it makes me feel like I'm actually doing something. I'm actually moving up, you know, in the automotive side. So yeah, that's probably more so my favorite part of it is like the diagnostic part, aspect to it."

Parks says that it's very important for women today to at least know a little about the basics of auto maintenance -- most importantly for their safety.

"I think it's very important, especially because, I mean, most women, a lot of us nowadays, we work, we have our own cars, we have our licenses, we drive alone a lot," she said. "Personally, I drive alone a lot because of work, school. I can't always have another person in the car type of thing because of, you know, my schedule. And say for women that have an older car or something and things go bad on it, you don't want to be stuck on the side of the road and have to wave somebody down. That can be very dangerous. Not having service in an area, especially in Arkansas -- it's safety, for a woman to know how to do at least some stuff. Change a tire, check your fluid levels, change wipers -- anything that's, like, simple but also can really save you. And in an emergency situation, I feel like those are essential for women."

Parks offered some quick tips for women and motorists, in general, to help keep them safe while on the road.

She said that it's always a good idea to keep an emergency bag in the vehicle with items such as a bottle of engine oil in case of engine trouble or a leak, coolant or distilled water in case of overheating, a flashlight, a tire pressure gauge and a tire depth gauge. In the case a tire depth gauge is not available, she said one can also use a penny. With the penny turned upside down, if the tire tread does not touch Abraham Lincoln's hair, then new tires are needed as the tires are bald. Drivers should also know where the jack and other tools are stowed in the vehicle, she noted.

Parks explained that even today, there are shops and mechanics that will take advantage of women and that every so often, she'll catch a hint of discrimination herself, working in the industry.

"Most of the men I work with or have met, they've been very supportive and they're like, 'Yes, there's a girl!' That's so cool there's a girl!' 'We need more women into this,' and stuff," she said. "But you do get some of the OGs. They kind of, you know -- the old ways, where this is a man's job and this is a woman's job. So they'll make comments and everything but not so much. If they made a comment or whatever, I choose to ignore it or someone else will call them out for it type of thing. But other than that, it's not really, not too bad."

When not working on cars, Parks still enjoys doing what she did as a child growing up -- being out in nature.

"I'm an outdoors person," she said. "I love it. It goes back to living in the (Maine) North Woods as a child and just being free, you know. And go and explore the back of the property, seeing wild animals, loose bears -- all that stuff. My brother works in Yellowstone National Park, so he went back to basically what we were when we were little kids -- going out into the woods. Like all he does is hike and that's a thing I really like to do. I like hiking, canoeing -- any of that stuff. Anything where it's just like you can detox in the wilderness type of thing and just relax, you know, instead of having to deal with the hustle and bustle or work, school, city, everything."

After graduating this coming May, Parks plans on continuing to work her way up in the business and becoming a full ASE (Automotive Service Exellence) certified technician in a dealership. She admits that she's partial to Toyota.

"I like working on Toyota cars so I'm kind of torn between either working up in a dealership or branching off," she said. "I know with branching off and doing your own shop, that's very expensive startup because of all the equipment that you have to get and just all the tools and everything. So I'm kind of leaning more towards staying in a dealership at least for the foreseeable future." 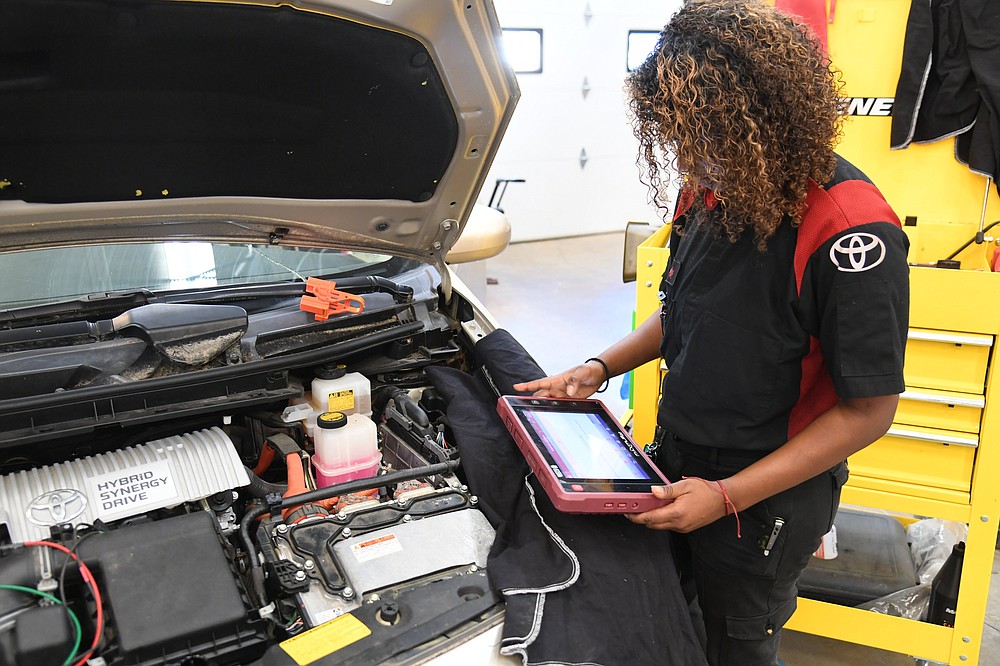 NPC students, and Toyota employee, Judaea Parks, looks at a Toyota at NPC. 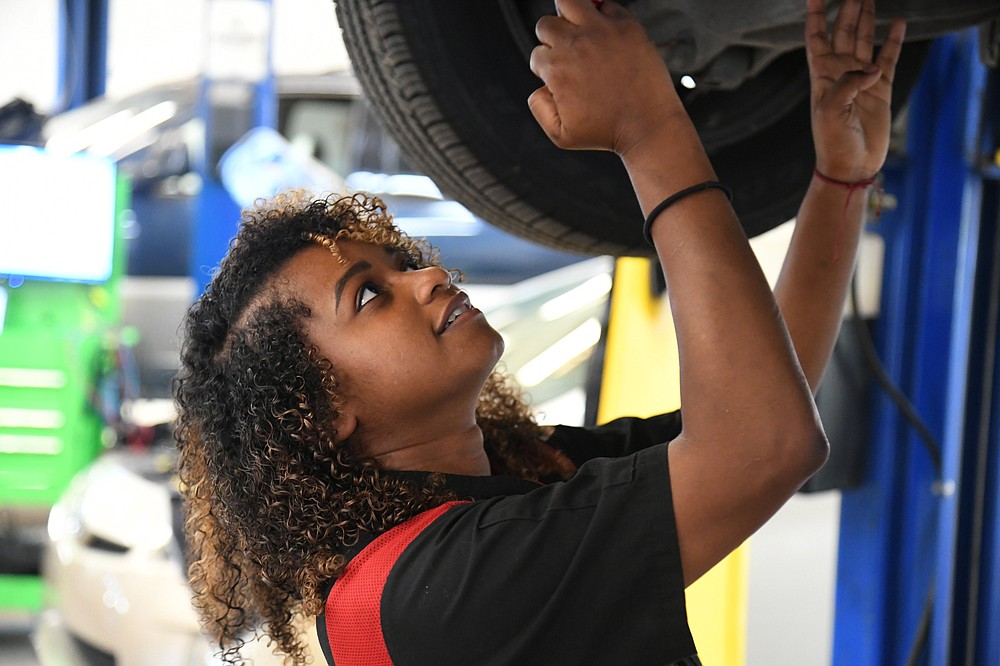 NPC students, and Toyota employee, Judaea Parks, looks at a car at NPC.