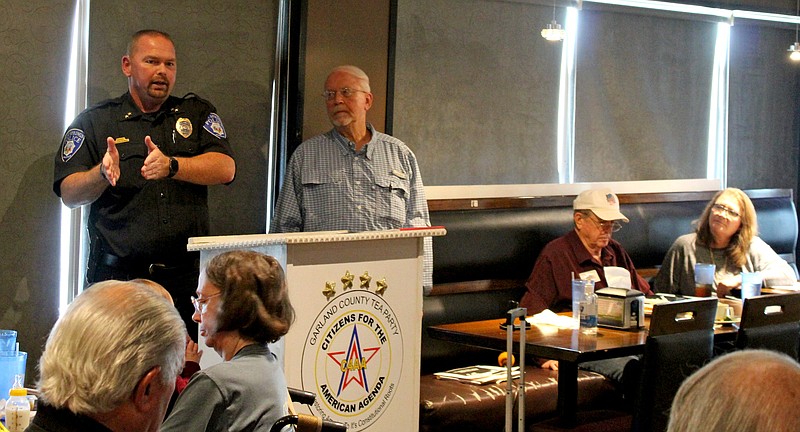 Hot Springs Police Chief Chris Chapmond, left, gestures during a speech to members of the Garland County TEA Party, including Reggie Cowan, chairman, left, during their regular meeting Wednesday at the Hibachi Sushi Buffet. - Photo by J.P. Ford of The Sentinel-Record

Hot Springs Police Chief Chris Chapmond has been "very, very busy" in the last 16 months since taking his position, fixing problems he was confronted with upon his return to the city and launching an unprecedented five-year strategic plan for the department, he said Wednesday.

"Regrettably, I walked back into the job with some problems on the table that we had to address immediately," Chapmond told members of the Garland County TEA Party at their regular meeting at the Hibachi Sushi Buffet.

"We had to change come cultural issues, change some morale issues, we had to work smarter, not harder. We were kind of behind the curve on some things," he said.

The department has hired 23 officers since Chapmond's return and "the vast majority of our department are officers that are very young," he said, noting, "If you want to change the culture and change the outlook of a department or organization, you bring in new people and teach them the way you want them to work and police."

For the first time in the history of the department, they have a written strategic plan. "We've never put our goals in a written document to hold ourselves accountable and I'm all about holding ourselves accountable," he said, noting the plan outlines "where we want to be as an agency in the next year, three years and five years."

He said there are 31 aspects of the plan and "within a year we've either completed or touched on 15 of those." Some of the main pillars include building trust and legitimacy in the community by "holding ourselves to the very highest standards."

While people talk about reforming and even defunding the police and the need for changing policies and procedures, Chapmond noted 90% of "what they want changed, we've already changed. We're already doing it. We banned chokeholds 15 years ago. We banned shooting at cars 15 years ago."

He said officers are held accountable through use-of-force reports that are submitted to state and federal authorities. Every officer signs a code of conduct document each year and they have mandatory training on de-escalation every year that most departments "probably touch on every three or four years."

"We do the right things. I'm proud to say that," Chapmond said, noting they have had body cameras for over seven years and in-car cameras "going back nearly 20 years," with every car and officer equipped with them.

"I love body cameras. I am one of the biggest proponents of body cameras in this state. They mitigate 90% of the complaints, automatically, which is fantastic," he said.

Asked how often the cameras are on, Chapmond said, "They don't run continuously. They're not designed to do that all the time," but certain triggers activate them automatically, such as the officer's vehicle going 74 mph or faster, the vehicle crashing or if the officer activates his lights.

He said officers are also required to turn them on for any citizen encounter and supervisors are required to do spot checks on all the cameras every month. Chapmond also noted he can activate any of the cameras as needed.

Another pillar of the plan is the increased use of technology, he said. "You can't hire enough officers to overcome the criminal aspects of our community. There aren't enough to chase down every criminal. You have to use technology to work smarter, not harder."

With the department's new "shots fired" locator, "If you shoot a gun in these areas we've got tech in, we get an alert within 30 seconds or even 15 seconds. That GPS locator pinpoints where the rounds were fired so our collection of evidence is up over 100%."

He said they are able to determine how gun crimes are connected. "What you may think is everybody and their brother out there shooting, in fact, it's about 10 or 12 people. We've been able to link them all together and they're going to jail for that. We've driven up on people in the middle of the street holding a gun, wondering how we got there so fast."

Asked about the coverage area, Chapmond noted it costs $50,000 for every square mile so they used data to identify two square miles that accounted for 67% of the more than 700 shots fired calls they have received in the last year.

He said he has been meeting with the U.S. attorney's office and talking with private entities in Hot Springs "who have businesses here who would possibly support adding on to that coverage area" through a private partnership.

"To not only protect their business but enhance the safety of the community. Does every portion of the city need it? Absolutely not. Do we need to expand it? Absolutely," Chapmond said.

The department is also utilizing license plate readers, so "as a bad guy is driving off, we're recording it. These readers are not big brother. We put in specific information we're looking for," he said. "We've been able to track bad guys from here to the border and back and intercept them bringing in narcotics."

One member asked about access to the information and if it could be sold. "The state legislates what we do," Chapmond said, noting the information is "kept for a period of time. We can't sell it. I know other states use it differently."

"That's a huge amount of resources bearing down on our problems in this community," he said. "Every three-letter federal agency short of the FBI" which allows them to prosecute criminals in federal court and get longer sentences.

"We've been able to prosecute 40 violent offenders at the federal level for a total of 437 years. On average, that's about 10 years apiece. That means we don't see them," Chapmond said. "On the state side, if they got that same 10 years, we'd be looking at them again in less than 12 months. They would be right back out here doing the same thing. This is huge."

He said they have identified twice that many more through the task force and the new technology and predicted, "18 months from now, we'll have a totally different outlook on where we were and where we ended up. This is not a quick fix and it's not going to be solved overnight, but we let it go for so long so we've got some catching up to do."

Chapmond said they have also pulled 295 guns "off the street," made 164 arrests involving violent crimes, and 404 adult drug-related arrests, "which play a role in 85% of all crimes."

He stressed that "it's not people all over shooting the town up. It's 12 to 15 involved in three or four gangs. We can identify them and work toward putting them in jail and if we can get them off the streets, we've really done something."

"Physically fit officers are less likely to be involved in a physical encounter when they come upon a bad guy. A bad guy is always sizing you up, to see how they can take advantage. If you're that officer that's got a dumpy uniform and your belly is hanging over your belt and they know you can't run, they're more likely to run from you."

The department has quarterly physical fitness tests and officers have to pass or they are not fit for duty, he said.

Asked about switching to the Arkansas Wireless Information System like other agencies, Chapmond said the HSPD "is going to be the last one to transition to that radio system. It has to be 100% done for us to be able to get on it. The entities on the radio system now are doing so successfully. I can't give you an end date, but I'm ready for it to happen."

He said the department is already using the equipment, "we just haven't pushed the final go button yet."

As for merging the city's dispatchers with the Garland County Communication Center, Chapmond said that was the state's recommendation, but "they didn't tell us how to merge, they just told us to merge, so we're working through that problem right now."