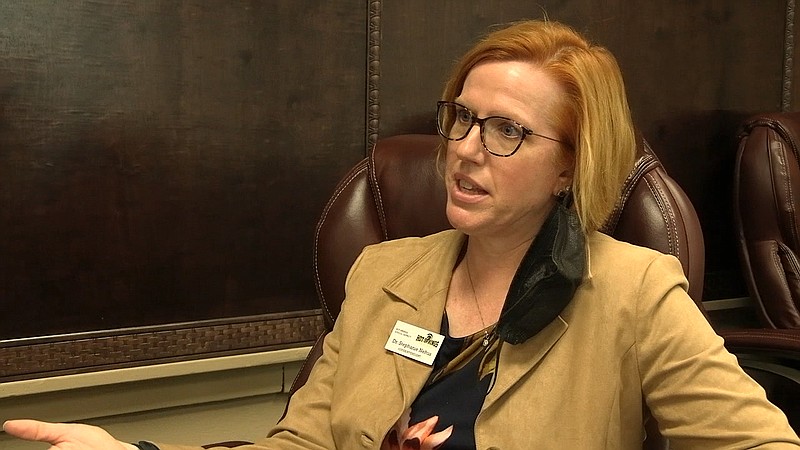 A little less than one month after CHI St. Vincent implemented a mandatory vaccination policy for its employees, CHI St. Vincent Hot Springs President Dr. Doug Ross says the feedback from the employees has been positive so far.

The policy, which requires employees to receive their vaccinations before Nov. 1, was put into effect following the recent surge of the COVID-19 delta variant. Ross said Wednesday he remains excited about the step the hospital took.

"We strongly believe that the vaccine is the safest and quickest way that we are going to get to the end of this pandemic," he said. "In our facility, the vaccines have been remarkably effective and remarkably safe and we believe that as the healthcare leader in this community, we want to set the right path and set the example of the importance of the vaccine. And that's why we've required it for all of our staff. And the feedback has been very positive so far so we're excited about that and we believe it's the right thing to do."

At Monday's Hot Springs/Garland County COVID-19 Task Force meeting, it was reported that both CHI St. Vincent and National Park Medical Center continue to see declines in the number of COVID patients they have. As of Monday morning, there were 64 reported between the two, which is down 19 from the previous Monday. Intensive Care Unit patients saw a decrease from 29 last Monday to 21, with 18 on ventilators. Also noted was the fact that 75% of the patients were unvaccinated.

"I think the main focus right now needs to be on the vaccination rates, not only in our hospitals, but in our community," Ross said. "Although our current surge is, thankfully, on the decline, if we don't get everyone vaccinated and this pandemic continues to go into the future, we are at risk for much more serious and much more deadly variants of COVID that are still to come.

The delta variant has been very serious but, unfortunately, there can be other variants that are even more deadly and more serious. And the quickest way and the best way to prevent those things from happening is for everyone to get the vaccine."

CHI reached its peak level of hospitalized COVID patients two weeks ago, according to Ross, and has now dropped to less than half of that number. Although their ICU remains full, as part of the hospital's contingency surge plan, he said they identified alternate areas of the hospital where they can care for critical care patients.

"So while we're very excited about that decline in the number of hospitalized patients, there still are a significant amount of patients in our hospital, especially in the ICU. Much like the rest of the state of Arkansas, our critical care beds remain full and that's something that we're working very diligently on to care for those patients to continue to have open and available critical care beds when a patient needs them," he said.

"We have implemented those plans and have been caring for patients in those areas. Our team has done a fantastic job. We have continued to have our doors open throughout the entire pandemic. Whether you have COVID or don't have COVID, we've been able to care for every patient that needed care, including those that had critical care needs."

While hospitals are seeing the effects from the delta variant surge, so too are the local schools. Last week the Hot Springs School District quarantined five classrooms due to the community spread of the virus. District Superintendent Stephanie Nehus said Wednesday they had to quarantine one pre-K class, one first-grade class, two second-grade classes and one third-grade class across three different elementary buildings in the district.

"I like to preface that because we have four elementary schools and we have multiple elementary classrooms in each of those schools," she said. "So five isn't a huge number but it was a large number for us internally and we did that, really taking into account the safety of all of our students and our staff. And, you know, when we see two or more positives in a single classroom, that leads us to err on the side of caution that that could be community spread. And we feel like that is happening and when we talked with Dr. (Gene) Shelby at the task force meeting that is what we're seeing with the delta variant. It is much more contagious and that spread is happening more so than we had dealt with in the past."

As of Wednesday, out of the nearly 3,800 student population, the district had 53 active positive student cases and seven staff with 246 students in quarantine. Nehus noted a large majority of the students, both positive and in quarantine, were under the age of 12.

"Obviously the surge here in Garland County has made things very challenging for all of our schools and I can speak on behalf of Hot Springs School District and all the school districts in Garland County," she said. "We're really worried, obviously, about our students and our staff members and we're really seeing the delta variant spread in a different way than we dealt with last year."

Shelby, the Garland County health officer, reported 19 deaths over the week, marking the highest weekly total of the pandemic, to bring the total COVID death count to 322 as of Monday morning. There were, however, only 355 new cases reported, down from 598 the week before. Shelby said the county's vaccination rate went up one percentage point to 35%. This compares to 40.8% vaccinated in the state and 52% nationwide.

While hospitals across some parts of the country have seen shortages in oxygen supply, Ross said CHI is doing well. He said the issue that has caused the most concern is having enough staffing.

"We're doing well with oxygen," he said. "We're doing well with ventilators, with gowns and gloves and masks. Really the area, across the state, that has been probably the biggest strain is staff and nurses to care for patients. But we've got a very dedicated team of nurses here and we are able to, again, care for anybody that needs us."

Ross said he is also seeing a "tremendous" response among patients to monoclonal antibodies. He said their facility has been administering up to 20 to 25 patients a day.