WATCH: HSDFF to return to in-person events with safety protocols 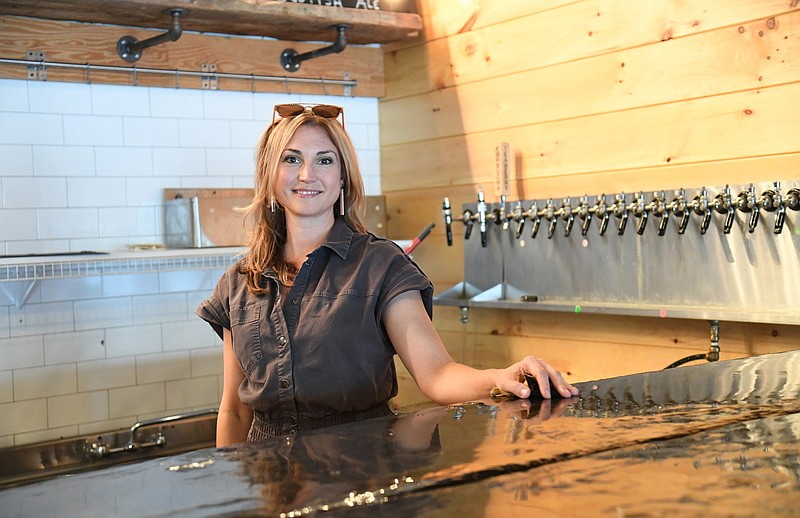 Jen Gerber, HSDFF executive director, stands at the bar of the former Craft Beer Cellar. The building will serve as the headquarters of the film festival this year. - Photo by Tanner Newton of The Sentinel-Record

After a largely virtual event in 2020, the Hot Springs Documentary Film Festival will return to the theater this October for its 30th anniversary, but with safety protocols in place.

"Unless something absolutely catastrophic changes, we are still moving forward with in-person plans. ... Obviously, the health and safety of our attendees and our guests is at the center of all our planning, and we are going to have quite a few protocols this year," Jen Gerber, the festival's executive director, said Wednesday.

"We'll be requiring proof of vaccination for every guest, or a negative test that's been taken within the last 48 hours," Gerber said, noting that negative test "will have to be a lab test, not one of those at home ones. You have to prove that you took it with a lab and that you were negative."

Masks will also be required for indoor events. "All of our after-party spaces have outdoor access," Gerber said. She also noted that guests who eat and drink will have to take off their masks, "so we want to make sure that they're in a really comfortable, safe space to do that," she said.

"We want to make sure it's a safe environment that people can feel comfortable coming into movie theaters and watching movies together, so we'll take all the measures we can to ensure that," Gerber said.

Gerber also said that attendance will be limited at the screenings. As a result, passholders will not be able to just walk into any screening at this festival.

"We will be watching capacity very carefully. There will be a handful of changes this year. ... One of the biggest is that passholders used to be able to just walk into a theater and this year we're going to ask them to reserve their ticket ahead of time, so that we can manage capacity and be mindful of attendance," Gerber said. She clarified that passholders still "can get free access with their pass to everything, but we want them to reserve it."

Recent festivals, prior to COVID-19, took place at the Arlington Resort Hotel & Spa. Gerber said that there will be events held at the hotel, and all of their guests will be staying there, but the movies will instead be screened at two classic movie theaters this year.

"We love the Arlington; we're still going to be very close partners with them. All our guests will be staying there," Gerber said.

Half the movies will be shown at The Malco Theatre and the other half will be shown at Central Theater. The headquarters of the festival will also change to the former Craft Beer Cellar at 120 Ouachita.

"We're mixing up our venues this year. So we'll be having our screenings between the Malco and Central Theater, and the business that was formerly the Craft Beer Cellar ... this will now be our headquarters," Gerber said.

The headquarters will house the festival's box office, merchandise store and VIP lounge. She also said that it will be "just a community space for people to gather, to have conversation, have a cup of coffee, go over their program, plan their day, and just take a break between screenings."

Gerber said she is excited to bring the festival to the two classic venues.

As far as returning to the Malco, Gerber said, "it's our birthplace, so that's why, especially for our 30th year, we wanted to return to a theater," she said.

Gerber also said she is excited to take the festival to Central Theater, which is currently being renovated by its new owner, Realtor Chris Rix.

"I've been following Chris Rix's progress very, very closely. He has a lot of ambitious plans, but, I mean every time I drive by there, he's doing tons of work, and he's been able to host a lot of successful events, even while he's in the midst of renovations," Gerber said.

Rix "has been an incredible partner, we're really thrilled to partner with him as well," Gerber said.

"It feels so good," Gerber said about seeing the Central be renovated. "I think for me, it points to what has been an ongoing resurgence in Hot Springs, which we're seeing our downtown just totally revitalized, and I think there's also, there's always been a strong artist community here in Hot Springs, but I think these venues, I mean Maxwell Blade and his show is incredible," she said.

Last year, the festival was held virtually, with showings of a few drive-in movies. Gerber said that the virtual aspect will return, but the drive-in likely won't happen again this festival.

"We're not going to do drive-ins. You know, it's certainly been in our back pocket. If COVID is really becoming a bear, and we just don't feel like we can host safely, that would be our default plan. This close to the festival now, I feel like we're moving, that our plan is going to stay like it is," Gerber said.

Gerber said that the lineup of the festival will be announced later this month, but said that they expect to have around 35 features and "about the same amount of shorts."