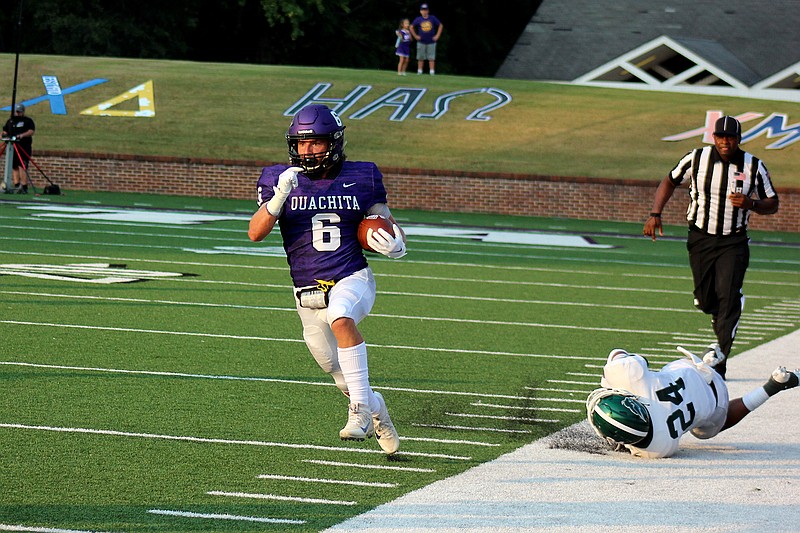 Ouachita Baptist&#x2019;s Connor Flannigan (6) runs down the sideline after Oklahoma Baptist&#x2019;s Trajan Lands (24) misses a tackle during Thursday&#x2019;s game at Cliff Harris Stadium. - Photo by James Leigh of The Sentinel-Record

ARKADELPHIA -- After 649 days without a football game, fans at Ouachita Baptist's Cliff Harris Stadium got their money's worth.

And that crowd of 4,682 included the NFL Hall of Famer the stadium was named for.

With the score tied at 31 with 8:09 remaining in the game, Ouachita Baptist kept Oklahoma Baptist to just 26 yards on five plays to set up a 97-yard drive for the Tigers.

After a pair of runs by T.J. Cole, first-year quarterback Grant Allen found a hole for an 18-yard gain, sliding down at the Tigers' 29 before a late hit moved the ball to the Ouachita 44. Two plays later, Cole broke free for a 22-yard run, but a face mask penalty added another 15 to the tally to put the Tigers in the red zone.

Kendel Givens worked his way up the middle three times to get to the end zone and put the Tigers up 38-31 with 3:11 left in the game after Gabe Goodman's kick.

The Bison, led by veteran quarterback Preston Haire, marched their way back down the field before with under a minute remaining, Haire spiked the ball at the 24 to stop the clock. Looking for the end zone, Haire launched a rocket that was picked off by sophomore Andrew Hayes with 39 seconds left, allowing the Tigers to go into victory formation.

The Tigers got off to a strong and fast start.

Freshman Xaylon Falls caught the opening kick at the Ouachita 7, and he ran it all the way back for the opening touchdown of the game with just 14 seconds off the clock for the 7-0 lead after Goodman's kick.

The Ouachita defense allowed just seven yards before Givens earned his first touchdown of the night, a single-yard run up the middle to cap a 10-play, 48-yard drive for a 14-0 lead with 9:17 left in the opening quarter.

The Bison began to cobble together a few offensive drives, moving the ball to their own 40 and then 46 separated by a three-and-out by the Tigers.

Both teams continued to stall out until Haire found his rhythm, throwing for three straight first downs before a short run and a 2-yard pass to Keilahn Harris put the Bison on the scoreboard with 6:09 left in the first half.

Oklahoma Baptist held the Tigers to another three-and-out before the Bison moved the ball 66 yards on just four plays, the last a 25-yard shot to Josh Cornell to pull within 14-13 after a missed kick.

The Tigers responded with an eight-play, 66-yard drive that was capped by a 26-yard field goal by Goodman for a 4-point lead, but the Bison moved the ball 56 yards in 39 seconds to set up a 36-yard attempt by Leonardo Schulz for a 17-16 Ouachita lead at the break.

Oklahoma Baptist took its first lead of the game just 2:46 into the second half with Reuben Thompson running the ball in from the 9 for a 23-17 lead after Schulz' kick. Both teams beefed up their defense, and neither scored again until Givens ran the ball in from the 3 with 33 seconds remaining for a 24-23 lead after Goodman's kick.

The Bison took just seven plays and 2:14 to move the ball 75 yards on the ensuing drive for a 31-24 lead after Tyler Stuever ran the ball in on a conversion attempt. The Tigers responded with a 10-play, 75-yard drive that burned 5:10 off the clock to tie the game at 31.

Cole led the Tigers on the ground with 21 carries for 151 yards and a score. Givens had 17 rushes for 79 yards and three scores, and Grant Allen had seven for 47. Allen was 7-for-13 passing for 93 yards with Flannagan reeling in five for 44 yards.

Stuever led the Bison on the ground with 84 yards on 17 touches with Thompson rushing five times for 25 yards. Haire was 36-for-52 passing for 345 yards and one interception while being sacked once. Cornell had 11 catches for 134 yards and a score, and Harris had 15 receptions for 121 yards and two scores.

The Tigers travel to Bethany, Okla., to face Southern Nazarene on Sept. 11 at 1 p.m. The Bison host Arkansas-Monticello at 6 p.m. in Shawnee, Okla.