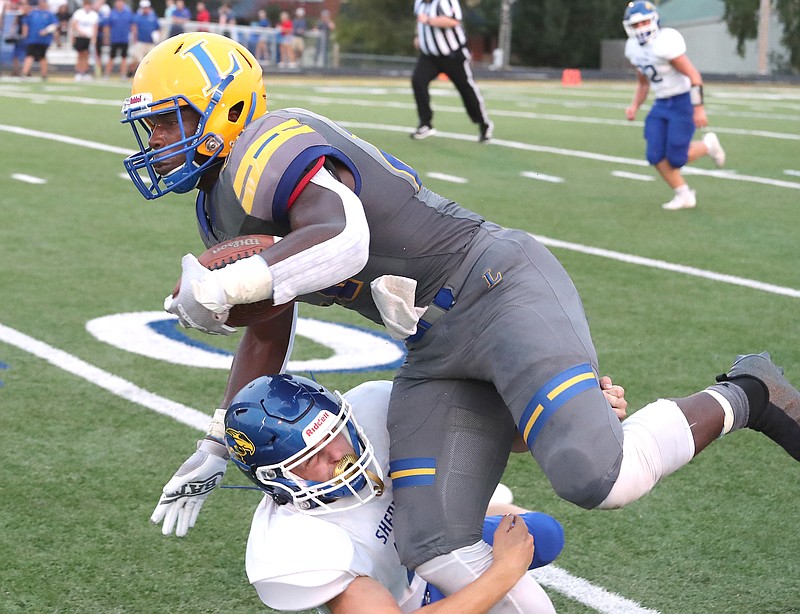 Lakeside’s Braylen Russell (27) is brought down by Sheridan’s Wesley Shumate (19) after a gain Friday at Chick Austin Field. - Photo by Richard Rasmussen of The Sentinel-Record

Lakeside's hopes of bouncing back after a 48-18 thrumming to Lake Hamilton were dashed by Sheridan as the Yellowjackets took a 24-7 win at Chick Austin Field.

Leading 12-7 at the half, Sheridan (1-1) controlled the field the rest of the night as senior quarterback Konner Canterbury led the offense with several big plays down the stretch.

Lakeside (0-2) came out of the break strong, holding the Yellowjackets on the opening possession of the half, but a fumble on the punt reception gave Sheridan the ball at the Rams' 15, shifting the momentum for the rest of the night. Junior Conner Anderson found sophomore C.J. Davis open in the end zone on a halfback pass for and 18-7 lead after a failed kick.

Sophomore running back Braylen Russell took charge of the Rams' offense before a pair of false starts led the home team to stall at midfield. Canterbury then found Davis on a 20-yard pass to end the third before, two plays later, running it in from the 5 to set the final.

Lakeside struggled to get its offense going early with Sheridan's defense forcing a turnover at the Rams' 28. Despite big tackles from junior Christian Bell and senior Caleb Weed, Canterbury found junior Owen Myers down the the right sideline with 4:31 left in the first for a 44-yard touchdown, but the kick was no good.

Lakeside senior quarterback Jordan Mills found Russell and Kyler Wolf before connecting with Russell for a 22-yard game on second-and-14. Mills then found classmate Brock Garner in the end zone for a 9-yard score with 42 seconds left in the first, and Andrew DeGrasse's kick gave the Rams their only lead of the night.

Canterbury found junior Caleb Cleveland for 40 yards before classmate Austin Webb led the team into the red zone. the Yellowjacket quarterback faked the handoff and took it up the middle with 9:12 left in the half.

Mills was 15 for 22 passing for the Rams for 150 yards while Russell rushed for 39 with an additional 28 receiving. Skylar Purifoy led the Rams' aerial attack with 34 yards while Kyler Wolf added 30.

The Rams will host Watson Chapel (0-1) next Friday night at Chick Austin Field while the Yellowjackets host Searcy (0-2).