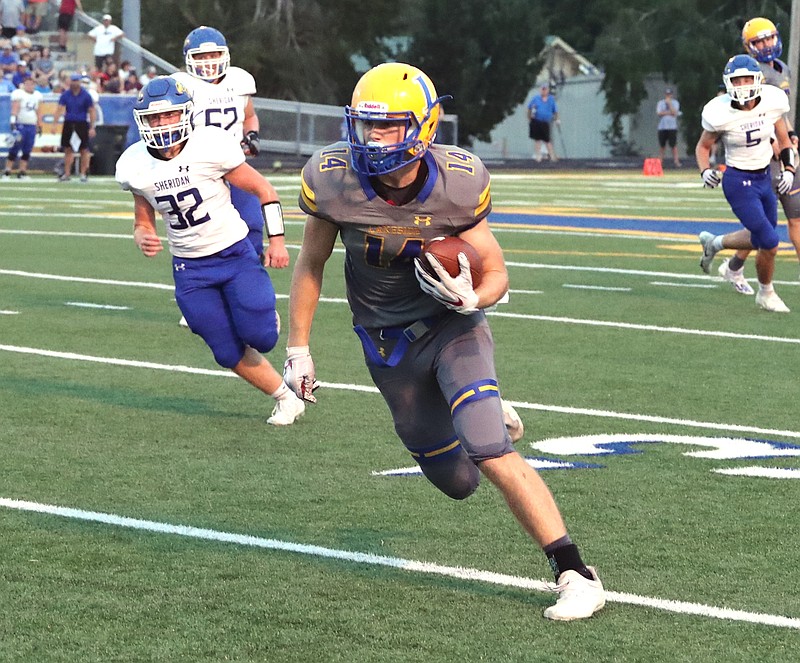 Lakeside sophomore Skylar Purifoy rushes with the ball early in Friday's game against Sheridan. The Yellowjackets defeated the Rams 24-7. - Photo by Richard Rasmussen of The Sentinel-Record

Lakeside continues to seek its first win after falling 24-7 to Sheridan Friday night at Chick Austin Field as the Rams struggled to get their offense going.

Lakeside (0-2) entered its home opener off of a 48-18 loss to Lake Hamilton in hopes of bouncing back, and may have well done so if not for Sheridan's (1-1) senior quarterback Konner Canterbury, whose mixture of throwing, running and punting gave the Rams a little more than they could contain.

Leading off the second half with a 12-7 lead, Sheridan continued its offensive push when, after catching a break off a Ram fumble off the punt reception, quickly punched in its next score of the night less than two minutes into the third. After Canterbury connected with junior receiver Caleb Cleveland on a bullet pass over the middle to the Rams 16 yard line and taking the keeper up to the 11, Canterbury handed off to junior Conner Anderson who found sophomore C.J. Davis open in the end zone to up the lead to 18-7 off the trick play.

While the Lakeside defense came out strong to start the half and held Sheridan at its own 33 yard line to force the punt, the Rams were never able to muster a comeback. Head coach Jared McBride, while gracious following the game, was obviously disappointed in his team's loss.

"The kids are playing hard and we just got to keep working to get better," he said.

The Yellowjackets were able to maintain control of the ball during the final six minutes of the third quarter as Canterbury marched the team downfield and found Davis for a 20-yard pass completion at the Ram 20 yard line to start the final quarter. Two plays later, Canterbury punched it in from 5 yards out to set the final at 24-7 after a bungled extra point attempt.

"I'm incredibly proud because the kids played so hard, they just played their guts out," he said. "So that's -- you know, that's all you can ask of anyone of anyone is to play as hard as they can, and that's what they did."

The Yellowjackets were coming off a 41-0 shutout loss at White Hall in their season opener. The Bulldogs (2-0) continued their shutout streak this week with a 35-0 shutout against Warren (0-1) Friday night.

"We were a lot better this week, and hopefully we can make that much improvement between this game and the next game," McBroom said.

The Rams looked sharp out of the gate with senior quarterback Jordan Mills connecting with Russell and senior Chase Cross to get them down to the Sheridan 28 yard line before Sheridan's defensive pressure and smothering coverage gave the Yellowjackets their first possession of the night. Despite key tackles from junior Christian Bell and senior Caleb Weed, Canterbury finally found junior receiver Owen Myers down the the right sideline for the first score of the night off a 44-yard reception at the 4:31 mark of the first.

Mills answered for Lakeside with back-to-back short passes to Russell and Wolf before, on second-and-14, connecting with Russell for a 22-yard reception. This set up the Rams' first and only score of the night when Mills hit senior receiver Brock Garner for a diving catch in the end zone from 9 yards out with 42 seconds remaining in the opening quarter. Andrew DeGrasse's kick made it 7-6 Lakeside going into the second quarter.

The Yellowjackets answered quickly into the second when Canterbury hit Cleveland for a 40-yard gain to the Lakeside 28-yard line before junior Austin Webb rushed the ball into the red zone. Canterbury took it from there, faking the handoff and shooting up the middle for the score with 9:12 remaining in the first half. Lakeside followed up with Russell breaking midfield into Yellowjacket territory but a false start penalty and incomplete pass ultimately held the Rams' offense to force the punt.

Mills went 15 for 22 passing for the Rams with 150 yards while Russell rushed for 39 yards with 28 in the air. Sophomore Skylar Purifoy had 34 yards recieving while Wolf added 30 receiving yards and Garner 20. Senior Cash Haight had seven tackles on the defensive side while Bell had six, Weed five, and junior Isaiah Brunson four.

Canterbury went 7 for 12 passing for 123 yards while rushing for 135. Davis put up 72 yards receiving while Webb added 48 on the ground and Anderson 22 yards rushing.

The Rams will host Watson Chapel (0-1) next Friday night at Chick Austin Field while the Yellowjackets host Searcy (0-1).