WATCH: Incentives 'name of the game' to attract films to state, commissioner says 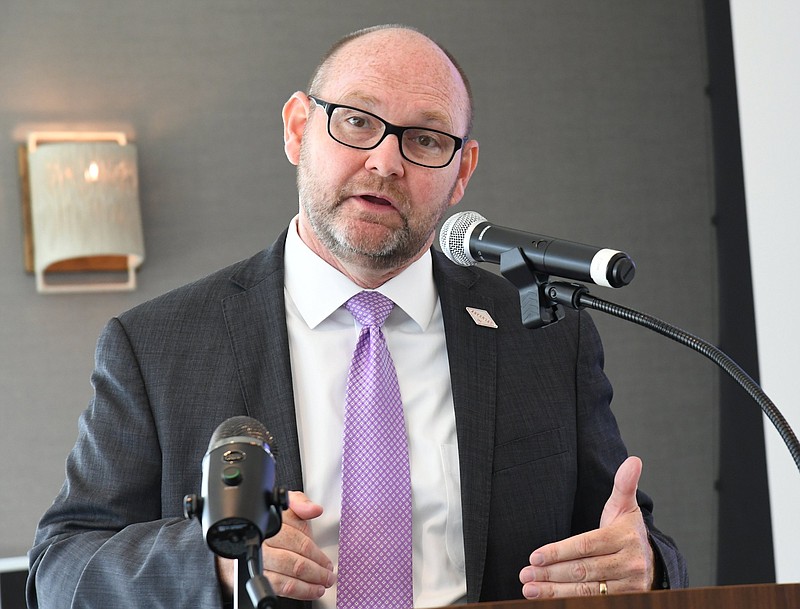 Crane spoke to the Rotary Club's weekly meeting on just how major films and television series come to make movie magic in the Natural State.

The Arkansas Film Commission has been around since the late 1970s, and Crane has been commissioner since 2007. A former actor, film technician, film teacher and native Arkansan, Crane works to encourage filmmakers to choose to film in the state and to ensure all projects benefit the state economically.

"Incentives are the name of the game," Crane said. "Coupled with incentives you have some things like location and infrastructure."

Film incentives are "an incentive for producers and directors to film in the state, and it's based upon their expenditure of raw goods and talent and labor in the state," he said. "In 2009, we were able to foster an incentive in the state. We were able to meet with a couple of filmmakers, one of which was Jeff Nichols, who helped produce 'Mud' in south Arkansas," a film featuring Matthew McConaughey and Reese Witherspoon.

"What that means is if somebody comes in here and goes to a local hardware store and they spend $100 we in the state are going to give them $20 back. What that does is it drives economic engines for communities. It's a huge bonus when we have a film come to a community. You can think of it as an extended convention," Crane said, "because they come in for a couple of months. They eat, drink and stay at the hotels. They use dry cleaning, they buy doughnuts, etc. And then the production itself is spending money on labor and travel and cars, houses and locations, etc."

Cranes says they did an economic impact analysis showing the impact for a single film was two-to-one.

The other part helping draw in producers is infrastructure. "The infrastructure of talent has increased," Crane said, "because we have some great universities and two-year schools that have put forth some really fine film programs. People think about film as just a writer or director, but these are true technicians. The film programs in the state teach skills. They teach how to be technicians on the set, beyond just directing and editing, because those are the worker bees.

"For us to succeed in the industry, we can't just have transient labor. Those people have to be here and be able to produce a film. Film is the ultimate amalgam of all the creative industries. You have to have all these people ... seamstress and carpenters to work on a film," he said.

"In the past 10 years our crew base has grown from when we were doing 'Mud' we had half of a film crew," Crane said. "We had to bring in a lot of outside labor, which produces economic leakage. We have three to three-and-a-half crews, which doesn't sound like a lot, but when you're talking to a producer, if you've got more than one they know they can come in and make their film. That's very very critical when we're talking to out-of-state producers and in-state producers."

Crane said they have been very successful despite the COVID-19 pandemic.

"We had a production called 'Ghost of the Ozark,' with David Arquette and Timothy Blake Nelson, shot in Jonesboro. At the very beginning of the pandemic we worked through COVID safety protocols. We did some things now known as 'safe sets.' We made zones and did individual packaging of snacks, catering, etc.," he said. "And because of that, producers started to notice they didn't have to completely shut down. Last year in Arkansas we had over 16 features shot, which is incredible during COVID."

Crane explained how location has brought in big names and projects, noting Arkansas provides producers with locations that vary in scenery. "We had John Malkovich here on two films this last year," Crane said. "It's really due in part, not to just the incentives, and not just because of the crew base, but because we have some of the most beautiful topography that there is in the United States."

Producers want to know what they can shoot that can look like something else. "Arkansas can double for all kinds of places besides itself. Within 30 minutes you can go from the foothills of the Boston Mountains, down to the delta, getting totally different looks, which is an incredible selling point to the film industry," he said.

Crane said every single producer they worked with for the past four or five years has said Arkansans are the kinds of people who want them to succeed.

Drawing the film community to Arkansas is a concerted effort, Crane said. "Film can happen in any community. We have a new website coming out. We are going to have a spot where you, as citizens, can go and list your property. If you have a property you will open your home to a film crew, we want to know about it. If you're an artisan, if you have a hardware store, if you have a plumbing store, if you've got some yarn to sell ... we want to know about it. It takes all of those things."