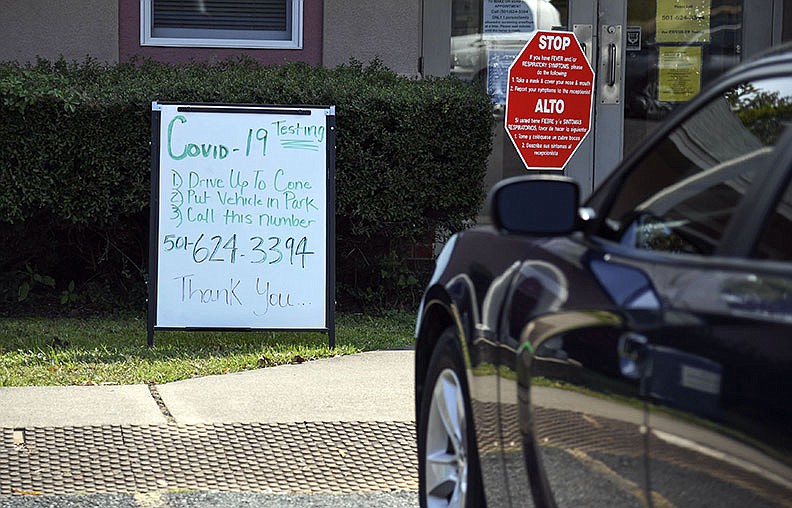 The COVID-19 testing site at the Garland County Health Unit is shown in October 2020. - File photo by The Sentinel-Record

After the number of COVID-19 deaths in Garland County steadily decreased over the last few weeks, this week saw a jump of 16 from last week as the delta variant maintained its hold.

Garland County Health Officer Dr. Gene Shelby said such sudden jumps can help give a glimpse into the short future of the pandemic's threat locally.

"We've had drops in each of the last three weeks," he said. "And deaths are kind of a following indicator. We had 16 more deaths recorded in Garland County last week and over the last three weeks, we've had a double-digit number of deaths that were added to the death roll."

"Our average number of cases per day for the past week has been about 59.4, which is up a little bit from the week before," he said. "Our positivity rate is staying about the same at that 12%. Of course, one thing we look at is the active cases, and that does seem to be coming down some. You know, we reached a high of almost 1,000 back about three weeks ago and currently we're down to like 593."

Shelby said he believes the next few weeks will be important.

"Looking at our numbers compared to a year ago, we're about four or five times the number of active cases that we were a year ago," he said. "And I know after Labor Day, we were concerned about an uptick from the holiday and then from school starting, but we really didn't see that until towards the end of October last year. So we'll be looking at those numbers, you know, real closely over the next few weeks."

The Hot Springs/Garland County COVID-19 Task Force, of which Shelby is a member, did not hold its weekly meeting on Monday due to the Labor Day holiday. Shelby said he is concerned for the area schools following a sudden breakout in cases at many of them two weeks ago.

"There were some real concerns that they actually had documented transmission of the virus within the school," he said. "Mainly in the elementary schools. So that's going to be something that's gonna be real important to be watched in the next few weeks."

Shelby cited a recent study from the Centers for Disease Control and Prevention regarding COVID-19 hospitalizations in children and adolescents. He said hospitalization and severe illness risks for children are much less than for adults in regard to COVID-19, but they are seeing an increase among children now with the delta variant.

"You know, one of the things that was published in this study was that during a seven-week period from late June to mid-August, the hospitalization rate in children age 0 to 4 increased by a factor of 10 -- also in adolescents age 12 to 17, which is the group that's eligible for vaccinations," he said.

"We saw that the number of adolescents in this group -- amongst the unvaccinated ... there were 10 times more unvaccinated hospitalizations than there were in vaccinated, you know, 12- to 17-year-olds," he said. "So I think that's really important kind of going forward because this is a, you know -- it does affect younger people and it's affecting younger people more. So I think that's something that I'll be watching closely."

Shelby said he believes the gaining popularity of monoclonal antibodies is a great thing -- especially with their ability to be administered at some pharmacies.

"I think it's an important thing and I'm certainly pleased that it's in wider use," he said. "You know, for a number of weeks after it became available, it really wasn't used that much, and they've also relaxed some of the guidelines on the use of the monoclonal antibodies. But before, it had to be given by an IV infusion, so they were doing just in their outpatient unit at the hospital, but now they've approved it for subcutaneous where you don't have to have an IV. The pharmacies have kind of stepped up and have clinics where they can provide the treatment there, and I think it's been shown that it really does some good in preventing people from getting, you know, the real severe effects of the COVID virus."

Shelby said, looking ahead at the remainder of the year, he does not see a silver lining just yet.

"I really, I don't," he said. "I think it's going to be a real challenging school year and winter. I mean, I fear that we'll start having the spike that we had last year in October, November and December. And unless we can really get more people vaccinated. ... You know, I think we're making some progress there. I think our percentage of people -- I don't have the numbers in front of me -- but our percentage of people that have just now gotten their first vaccination, I think, is an encouraging sign that more people that were hesitant about getting the vaccine are starting to get the vaccine.

"So I think that if we can kind of really continue to promote the importance of vaccinations, I think that that's going to be the one thing that will really determine how long we're going to be dealing with this and the severity of it going forward into the winter months," he said.