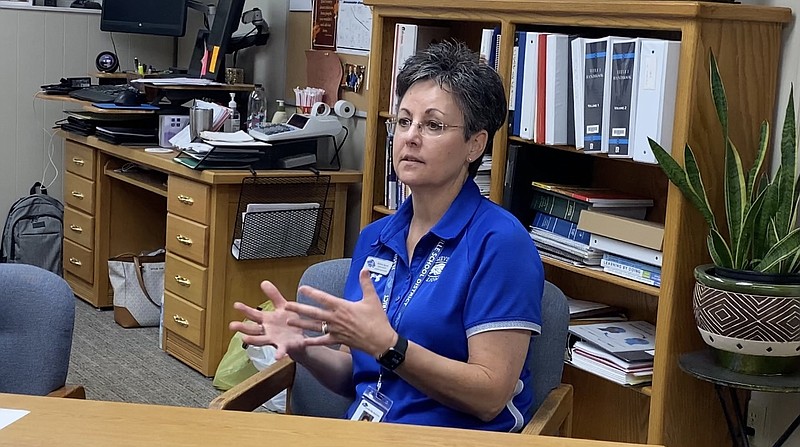 Jessieville School District Superintendent Melissa Speers talks about the recent surge in positive cases of COVID-19 on campus this week. - Photo by Brandon Smith of The Sentinel-Record

JESSIEVILLE -- After the COVID-19 delta variant made its mark on the Jessieville School District this week, causing the cancellation of tonight's senior high football game at Mount Ida and last night's junior high game, Superintendent Melissa Speers says the school board will review new survey information during its meeting Monday night before deciding whether to implement a mask policy.

Though the district does have strict guidelines and protocols in place to help prevent the spread of COVID-19, Jessieville remains the only one of the seven public school districts in Garland County, plus the Arkansas School for Mathematics, Sciences, and the Arts, to have not made wearing masks mandatory.

This week's uptick in cases and quarantine numbers led the senior high team to cancel while Mount Ida's own issues with the pandemic spread called for the junior high match to be canceled.

While Speers did not share how many from those numbers were either players or from the coaching staff, she said that based on their numbers for both positive cases and quarantines they needed to cancel the game for safety reasons.

She noted the student population as a whole is doing well in following safety guidelines and the buildings and classrooms continue to be regularly cleaned and sanitized.

"Right now we're just strongly encouraging and strongly suggesting (the wearing of masks)," she said. "And we'll go in and you'll see some students in the classrooms and out on campus who are wearing masks, and then you'll see some who are not."

Regarding a possible implementation of a mask mandate, Speers said if the board decides to pass a policy it would likely be some form of one where certain statistical thresholds had to be met or other restrictions. She said that so far, the general consensus from the community has been to make wearing a face mask optional while strongly encouraging it.

"I sent a survey at the beginning of August and the majority did not want us to mandate masks," she said. "They wanted it to stay voluntary at that time and so did our staff. So that was what the board chose to do at that time. But we'll have a board meeting Monday night and so I'm just gauging again -- now that school has started and we've seen an uptick in cases -- has that changed anybody's mind?

"So we'll just be taking all the data to the board so that, you know, they can look at that and make a decision on whether they want to consider a mask mandate. ... You know, a temporary one, with certain restrictions, just see what they would like to do and what the will of the board is based on all the data that they have," she said.

The district is actually seeing more positive cases this year than it did last year -- which Speers credits, most likely, to this year's variant form, she said.

"I don't know about more than expected but it is definitely ... we've had more positive cases than we had last year," she said. "And I think that's just because of the variant that it is. But we have had more positive cases so far and we're just on week three. I'm not sure that it's tied to masks or not masks, but definitely the number that we're quarantining (this year).

Jessieville's last vaccine clinic was held during their open house event on Aug. 16. She notes, however, that she is about to send out another survey to parents to see if there is an increase in interest for another clinic.