Man who reportedly fled in '20 arrested for allegedly trespassing 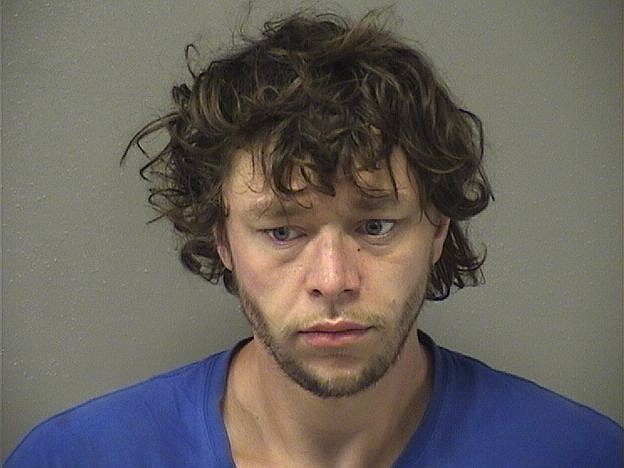 A homeless felon sought on multiple warrants, including felony fleeing, from a pursuit last year where he reportedly crashed into another vehicle was arrested Wednesday after allegedly trespassing inside a house.

Seth Kane Hughes, 31, who lists "city streets" as his address, was taken into custody shortly before 6 p.m. and charged with the felony fleeing warrant and possession of a controlled substance, meth, each punishable by up to six years in prison, and misdemeanor charges of theft by receiving, second-degree criminal mischief, possession of drug paraphernalia and criminal trespass.

Hughes, who also had a failure to pay warrant, remained in custody Thursday in lieu of a $19,750 bond and is set to appear today in Garland County District Court.

According to the affidavit for the warrants for fleeing, criminal mischief, theft by receiving and possession of drug paraphernalia, on Nov. 14, 2020, a woman reported the theft of her license plate from her vehicle parked on Prospect Avenue. The plate was subsequently entered into the Arkansas Crime Information Computer system.

On Dec. 15, shortly before 11:30 a.m., Hot Springs police Sgt. Scott Lampinen spotted a spray-painted Chevrolet Silverado pickup truck with the stolen license plate parked on the side of the road at Pond and Linwood streets.

As Lampinen was confirming it was the stolen plate, the vehicle pulled out onto Pond, so he followed it as other officers approached his location. The driver, later identified as Hughes, turned onto South Street headed east as Officer 1st Class Taylor Gates got behind him and attempted a traffic stop by activating his lights.

Hughes reportedly turned onto Second Street, refusing to stop, and then accelerated as he approached Hobson Avenue, running the stop sign and then proceeded past Rector Street and ran a second stop sign at Garland Street.

He turned onto Ward Street headed west but then quickly turned into a parking lot of the businesses in the 200 block of Second. The affidavit notes the businesses were open with numerous people in the area and "he drove at a high rate of speed through the parking lot with complete disregard for public safety."

Hughes exited back onto Second and "disobeyed the yield/right turn only sign" at Second and Grand and crossed five lanes of traffic on Grand to Violet Street where he ran another stop sign at Quapaw Avenue.

At that point, Hughes reportedly struck another motorist traveling east on Quapaw with the impact disabling both vehicles and causing the second vehicle to spin 180 degrees. Hughes' vehicle continued until it collided with a retaining wall in the 200 block of Violet, causing over $1,000 in damages.

Hughes was detained as he exited the truck and later transported to a local hospital for treatment. During an inventory of his vehicle, a syringe consistent with drug use was found in the driver's side door.

Warrants on the various charges were issued for his arrest the next day on Dec. 16.

According to the affidavit on the trespassing and felony possession charge, shortly after 5 p.m. Wednesday, officers responded to a residence in the 100 block of Holt Street after the owner of the property called to complain there were people trespassing inside.

Officer Cody Rollins saw two men on the property and one ran inside while the other stayed outside near a gold Chevrolet Silverado. While speaking to the man outside, officers found a syringe inside the truck that contained less than 2 grams of what later tested positive for meth.

Officers entered the residence and located Hughes hiding in the basement and took him into custody, initially for trespassing, but a computer check showed the multiple warrants from the December incident.

After being read his rights, Hughes reportedly told police the syringe found in the truck belonged to him resulting in the additional felony charge.