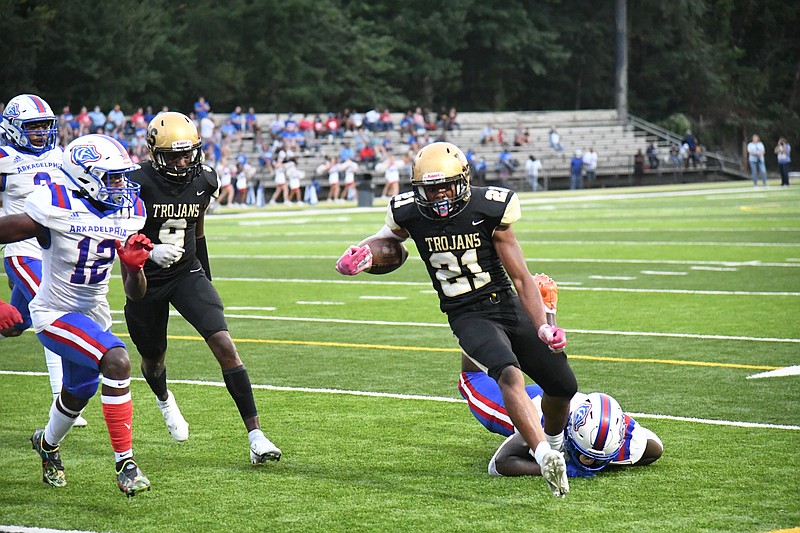 Hot Springs bounced back in big fashion Friday night at at Tommy J. Holt Memorial Field at Joe C. Reese Stadium as the Trojans used a tight defensive play for a 34-0 shutout over Mena.

With the Trojans leading 20-0 at the half, Mena caught a break with an interception off Hot Springs' opening series of the second half. The Trojan defense held the Bearcats to a quick series of downs to set up another score.

After Trojans' senior Pierce Smalley denied a long pass completion from quarterback Austin Rose, Hot Springs' senior quarterback Isaac Shelor punched it in from two yards out to take a 27-0 lead after the kick by senior Anthony Lewis with 5:28 left in the third.

Junior Akeem Dorsey spun his way down to the Mena 29 before sophomore Perry Jones hit the outside for the long touchdown run with 7:50 left in the game to set the final.

The Trojans took control of the game early with senior Robert Linnear making several short carries before Dorsey broke free for a 20-yard score, breaking a last-second tackle to reach the end zone. Shelor then found junior T.J. Brogdon open on a 13-yard pass into the end zone after he was flushed from the pocket to go up 13-0.

Dorsey got his second score on a five-yard run with three minutes left in the half.

Shelor was 13-for-21 passing for 162 yards with one interception and ran for 45. Dorsey had 136 yards on 14 carries to lead the ground game with Brogdon leading the receivers corps with three catches for 56 yards.

Mena QB Austin Rose was 6-for-16 for 64 yards with one interception. Gabe Corcoran had nine touches for 16 yards with Caleb Peters leading the receiveres with three catches for 29. Jayden Felix finished with 10 tackles.

The Trojans head to Wolf Stadium Friday to face the Lake Hamilton Wolves while the Bearcats host Booneville.