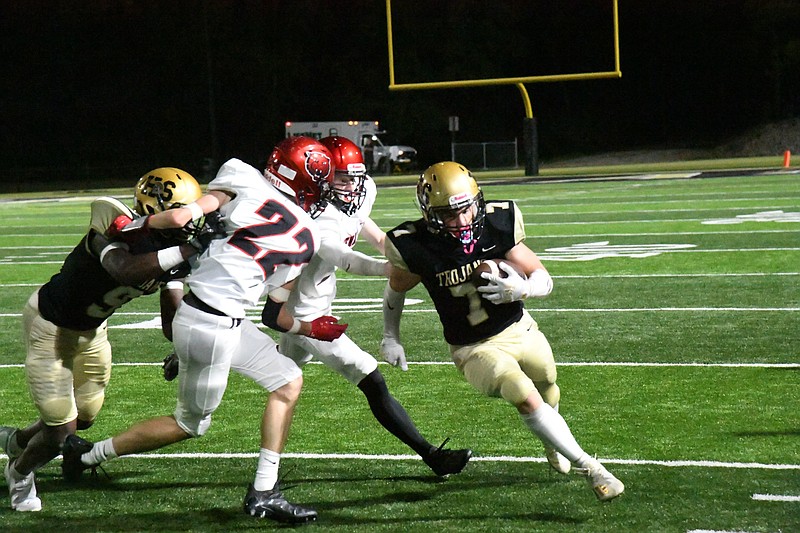 Hot Springs' Blake McLelland (7) avoids a tackle while picking up yards during Friday's 34-0 win over Mena. - Photo by Tanner Newton of The Sentinel-Record

Hot Springs had no trouble executing its plans for self-redemption Friday night at Tommy J. Holt Memorial Field at Joe C. Reese Stadium as the Trojans shut out Mena 34-0.

While the Trojans (2-1) were obviously clicking on all cylinders on offense, it was their effort on defense that truly shined, ultimately keeping the Bearcats (2-1) out of the end zone the whole way through. Hot Springs entered the game off a 43-27 home loss to Arkadelphia, while Mena rolled in off a 34-14 victory over Clarksville.

"Man, just our energy," said head coach Darrell Burnett regarding the key to their victory. "The kids came out and believed -- came out and played hard. You know, we went out there on defense -- the first defense stepped it up, made some plays, tackles for loss. And offense had a good 16-play drive, which is kind of odd in high school. So it just goes back to our kids, man. That type of character they've got, and (they) wanted to win."

As the Trojans started the second half up 20-0, a quick interception -- the only turnover by senior quarterback Isaac Shelor -- gave Mena possession at its own 20-yard line.

Hot Springs quickly regained the ball to set up its first touchdown of the third quarter after senior Pierce Smalley broke up a deep Bearcats throw attempt.

Starting from their own 31-yard line, Trojans sophomore running back Akeem Dorsey shot out of the gate for 44-yard pickup deep inside Mena territory before Shelor eventually punched it in from two yards out for a 27-point advantage following the good kick from sophomore Anthony Lewis at the 5:28 mark.

The Trojans took possession again early in the fourth quarter after Mena turned the ball over on downs at the Hot Springs 21. Despite a 35-yard total pickup from Dorsey followed by an 8-yard pickup from sophomore T.J. Brogdon off a pass from Shelor to once again put them in scoring position, the Bearcat defense held on before ultimately trying unsuccessfully to stop the final Hot Springs touchdown of the night just over four minutes in.

Trojans junior Jayvion Walker sacked Mena senior quarterback Austin Rose to take over at the Bearcat 44, leading to junior receiver Perry Jones hitting the outside and outrunning his defenders all the way into the corner of the end zone for the score. Lewis set the final by splitting the uprights.

Burnett said he was proud of the way his team handled adversity Friday night. He noted that except for a few minutes in the second quarter, they did well.

"We had a lot of kids step up," he said. "A lot of kids on both sides of the ball got touches, tackles, did their job and stepped up for their teammates. And any time you can put up over 500 yards (on offense), you're happy. We left some deep balls out there again -- the same as last week -- so we gotta fix our deep ball timing and connection. But other than that -- some O-line, big boys up front, you know, they don't get a lot of credit, even though that's one of our strongest points on our team. They opened up the lanes for the running backs, they protected for the quarterback, so our O-line get that ball, they did good man"

The Trojans took control of the game early with senior Robert Linnear making several short carries before Dorsey broke free for a 20-yard score, breaking a last-second tackle to reach the end zone. Shelor then found Brogdon open on a 13-yard pass into the end zone after he was flushed from the pocket to go up 13-0.

Mena head coach Craig Bentley noted after the game that his team didn't come out to compete like they should.

"But I was disappointed with our effort in the first half, and so we challenged them at halftime. That, you know, football's football -- you're going to have halves like we did in the first half, but for us, again, I'll take the blame but I didn't feel like our effort and energy was where it needed to be. ... Obviously, (Hot Springs) was a whole new animal. We saw a lot more speed than what we've seen. You know, a lot more athleticism than what we've seen, and I didn't think that, again, that we reacted very well early on especially at that."

Shelor was 13-for-21 passing for 162 yards with one interception and ran for 45. Dorsey had 136 yards on 14 carries to lead the ground game with Brogdon leading the receivers corps with three catches for 56 yards. Tyrell Lambert and Michael Jackson led the defense with seven and six tackles, respectively.

Mena quarterback Austin Rose was 6-for-16 passing for 64 yards with one interception. Gabe Corcoran had nine touches for 16 yards with Caleb Peters leading the receiveres with three catches for 29. Jayden Felix finished with 10 tackles.

The Trojans head to Wolf Stadium Friday to face the Lake Hamilton Wolves while the Bearcats host Booneville.