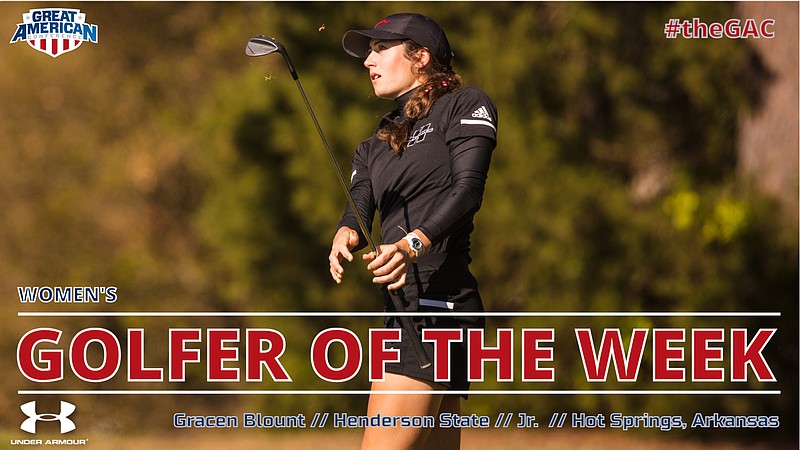 Lakeside graduate Gracen Blount was named the first Golfer of the Week in the Great American Conference for the 2021-22 season.

The Henderson State junior opened the fall season by earning medalist honors at the Central Region Fall Preview, her first career tournament title. Blount opened the tournament with a 1-under 71 to take the lead in the first round before taking a 2-under 71 in the final round for a three-stroke win.

The Reddies won the team event by eight shots. The tournament featured seven of the nine 2021 regional qualifying teams.

Others nominated for the award were Arkansas Tech junior Jacqueline Klemm and Harding sophomore Brenda Sanchez.

The freshman Rams won 25-16, 25-15. Vance had four kills, two solo blocks and two digs, Penny Fuller-Freeman had two kills, and Ella Witherington, Kessler, Rucksthul and Kinder had one kills each. Throgmartin had seven aces and eight assists, Kinder added five aces and seven digs, and Rucksthul had a solo block.

The Lions were the only team to post a score in the boys match with a 279. Braden Efird and Wyatt Clement were co-medalists with low rounds of 90, and Blake Smith (99), Nick Tucker (101), Gavin Urban (102) and Riley Tuttle (104) rounded out the team's scoring.

Poyen was led by Blayden Gillham with a round of 93, Ashton Heath shot a 100, and Dylan Spurlin finished with a nine-hole round of 50. Glen Rose's Bradley Tillery shot a 105, and Wyatt Stanley had a 115.

Hannah Collie shot a low round of 81 for medalist honors while teammate Anna Cain was runner-up medalist with an 84. Ellie Norris (103) and Jenna Payne (115) rounded out the scoring.

Avery Fikes led Glen Rose with a 108, and Laney

Fountain Lake's girls tennis team swept their matches against Episcopal Collegiate Thursday while the Wildcats won all but one match against the Cobras.