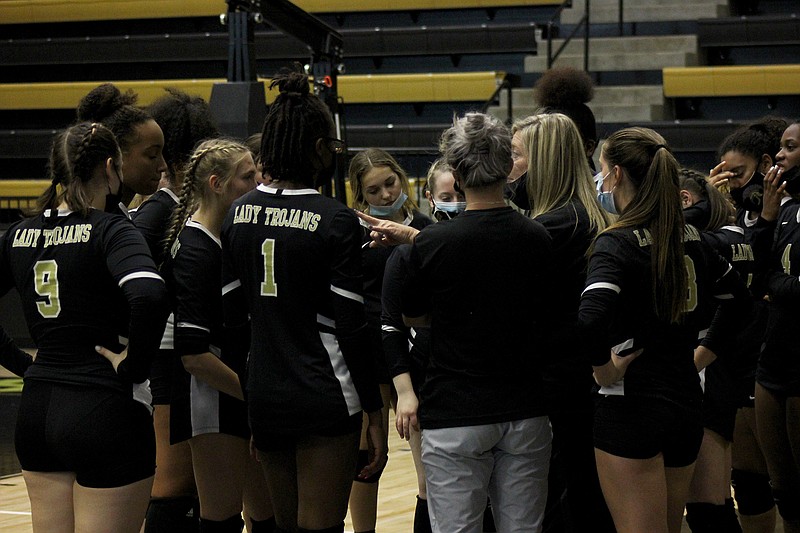 Hot Springs head volleyball coach Deana Franklin directs her players during a timeout during Thursday&#x2019;s win over El Dorado at Trojan Arena. - Photo by James Leigh of The Sentinel-Record

High school volleyball is gearing up for conference play with most Garland County teams having faced off against at least one conference foe.

The 5A-South, the most-represented conference in the county, has Lakeside tied with Sheridan for the lead with three conference wins each with Hot Springs second with one win. Lake Hamilton has two conference losses after falling to both Sheridan and Lakeside with the top two teams set to face off Tuesday in Sheridan.

The Lady Trojans (3-1, 1-0) picked up their first conference win over El Dorado Thursday and travel to Pearcy Tuesday to face Lake Hamilton (2-3, 0-2).

Hot Springs head coach Deana Franklin said that while it is early in the season, she feels good about the team, especially the senior leadership.

"We've had a few ups and downs and bumps in the road, but overall, it's a, it's a pretty good team," she said. "The motivation is there; the leadership is there. They just, they just play well with each other. I can put pretty much any combination of kids out there, and they're gonna perform. It's, it's pretty, it's a pretty unique group."

Of her 17 players, five are seniors. One of those seniors is a transfer from Malvern, Leia Patton, who has stepped into the leadership role as well.

"The group of seniors is extremely strong, extremely passionate about what they do, and are really quality leaders," Franklin said.

Franklin said that all five of her seniors start with the sixth starting position belonging to sophomore setter Bianca Thomas.

"Marlissa Archie is one of my outside hitters, and is playing that left back spot, which is normally a libero spot," Franklin said. "She's not built like a libero, but she sees the floor well. She reads the floor well, she moves well, and probably is leading our team right now in digs. I haven't calculated it all yet, but she's probably leading our team in digs. So she does her job defensively as well as offensively."

Patton has stepped into the middle blocker role after transferring.

"She's a little thing but jumps like crazy. ... And yeah, she has kind of owned her spot in that middle and does a really good job there," Franklin said.

"Necci Owens is playing my right front spot," she continued. "And she's long and lanky and is a great blocker against other teams' outside hitters. Bella Timm comes in and plays a middle back spot as well as Whitnei Long. Those two seniors are both playing my middle back spots, and they have a passion for not letting that ball hit the floor. So the the intensity that they give and the fire in their eyes, it's, it's pretty special."

Thomas is a player that has led Franklin to change her system for, what she believes, is the first time.

"She has tremendous hands, and in my career, I don't think I've ever run a 5-1 offense before," Franklin said. "I've always had a back row setter. And her hands are so pretty, and she sees the floor so well that I'm running a 5-1 offense, and she's my setter all the way around. We talked about her playing not like a sophomore; she really does play well for her position. She sees the floor well; she reads the floor well. We're working a little bit more on her aggressiveness at the net, because she's a long, lanky thing that moves well and can kill the ball if we give her the opportunity."

Like in most high school sports, volleyball teams face their conference opponents twice, so Franklin did not want to assume too much about her team. She does feel like it could be a good year for them though.

"It's really hard to say," she said. "You never really know until you've faced all your competition, at least once. You know, our conference -- we've kind of finished middle of the pack every year, and we're hoping to rise above that this year. We got to the state tournament last year. They got a little taste of that, and I hope we're hungry for it again, so that we can get there again and do better than we did last year."

Find the full podcast at https://bit.ly/3A6vfzt.