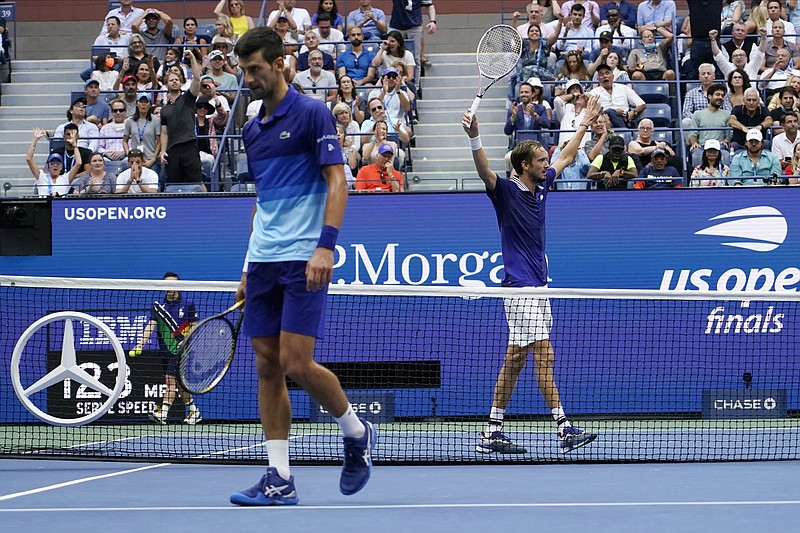 Daniil Medvedev, of Russia, reacts after scoring a point against Novak Djokovic, of Serbia, during the men's singles final of the US Open tennis championships Sunday in New York. - Photo by Elise Amendola of The Associated Press

NEW YORK -- Novak Djokovic was, understandably, deflated. The quest to do something no man has done in more than a half-century took a lot out of him, physically and emotionally.

The No. 1-ranked Djokovic acknowledged as much after crying during the last changeover of his 6-4, 6-4, 6-4 loss to Daniil Medvedev in the U.S. Open final.

What the 34-year-old from Serbia was not ready to do after coming agonizingly short -- one victory short -- in his attempt to win all four Grand Slam tournaments in a single season was to concede anything in the long term.

There is a new batch of talent making a push toward the top of the sport, but he will press forward.

Yes, Djokovic had spoken beforehand of giving everything he had against No. 2 Medvedev on Sunday, of treating it "like it is the last match of my career." And, yes, Djokovic did come out flat and was outplayed. Not the best combination for Djokovic: He had an off day; Medvedev had a great one. So, yes, Djokovic found the whole thing disappointing.

Of course he did. That's only natural. To play so well and give so much, for so long, under an intense spotlight and burdened by pressure, from the outside and from within, is draining. No man had even won a year's first three major titles, let alone the full quartet, since Rod Laver in 1969.

"It was a lot to handle," Djokovic said.

He got 27 of the 28 victories necessary for a true Grand Slam.

He just couldn't get the 28th.

"Part of me is very sad," Djokovic said. "It's a tough one to swallow, this loss, I mean, considering everything that was on the line."

But he will play again, and he will resume his work to overtake rivals Roger Federer and Rafael Nadal and break their three-way tie for the most major championships earned by a man, 20. No one should, or would, be surprised if No. 21 for Djokovic arrives just a few months from now at next year's Australian Open, a tournament he has won nine times.

Even if the three men he faced in Grand Slam finals in 2021 are in their 20s -- Medvedev, 25, at the Australian Open and U.S. Open; No. 3 Stefanos Tsitsipas, 23, at the French Open; No. 7 Matteo Berrettini, 25, at Wimbledon -- and there are other, younger, players moving up the ladder, too, Djokovic is not ready to step aside.

"The transition was inevitable," Djokovic said Sunday, before stating: "The older guys are still hanging on."

Well, he is, certainly.

Federer, who turned 40 on Aug. 8, and Nadal, 35, both missed the U.S. Open because of season-ending injuries.

It will be fascinating to see how Federer's latest knee operation and Nadal's chronic left foot pain affect them moving forward.

And it will be fun to watch whether the group a decade or more their junior, which also includes 2020 U.S. Open champion Dominic Thiem, 28, and the man he beat in that final and Djokovic edged in a five-set semifinal Friday, Tokyo Olympics champion Alexander Zverev, 24, plus even younger guys like Americans Sebastian Korda, 21, and Jenson Brooksby, 20, can make serious strides and win a major -- or majors.

Medvedev talked Sunday night about the boost he expects to receive from winning a Grand Slam after having been 0-2 in previous finals -- and from doing it against Djokovic, of all people, during this season, of all seasons.

"For my future career, knowing that I beat somebody who was 27-0 in a year in Grand Slams ... he was going for huge history, and knowing that I managed to stop him," Medvedev said, "it definitely makes it sweeter and brings me confidence for what is to come."

As well it should.

Djokovic already has reserves of such self-belief. He goes into every Grand Slam tournament visualizing himself with the trophy. That is unlikely to change because of one setback.

"I still want to keep going, try to win more Slams, play for my country," he said. "Those are the things that motivate me the most, I think, at this point." 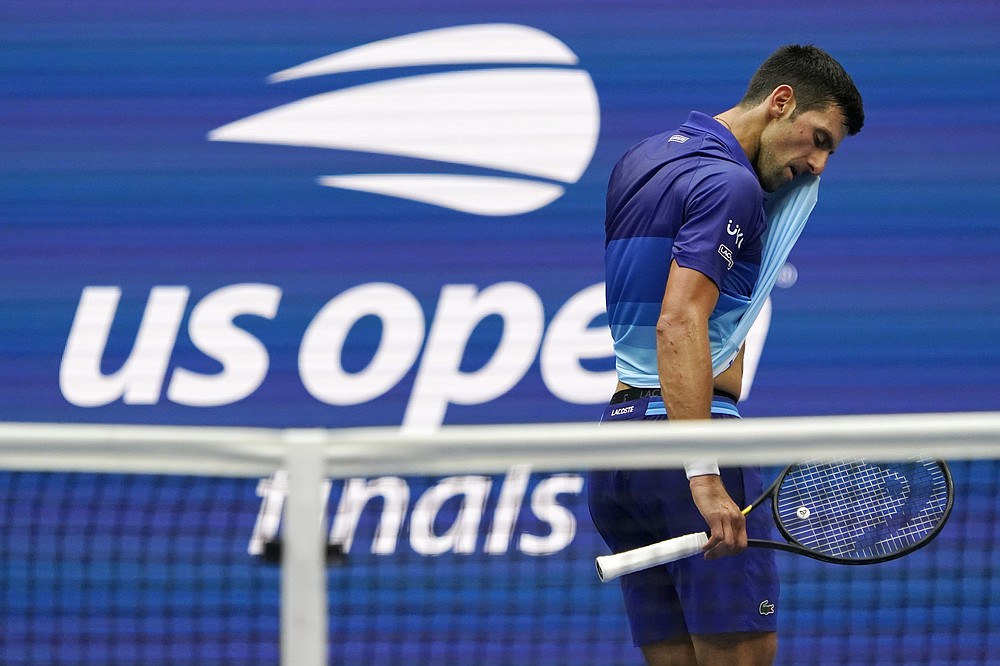 Novak Djokovic, of Serbia, wipes sweat from his face between serves from Daniil Medvedev, of Russia, during the men's singles final of the US Open tennis championships, Sunday, Sept. 12, 2021, in New York. (AP Photo/Elise Amendola) 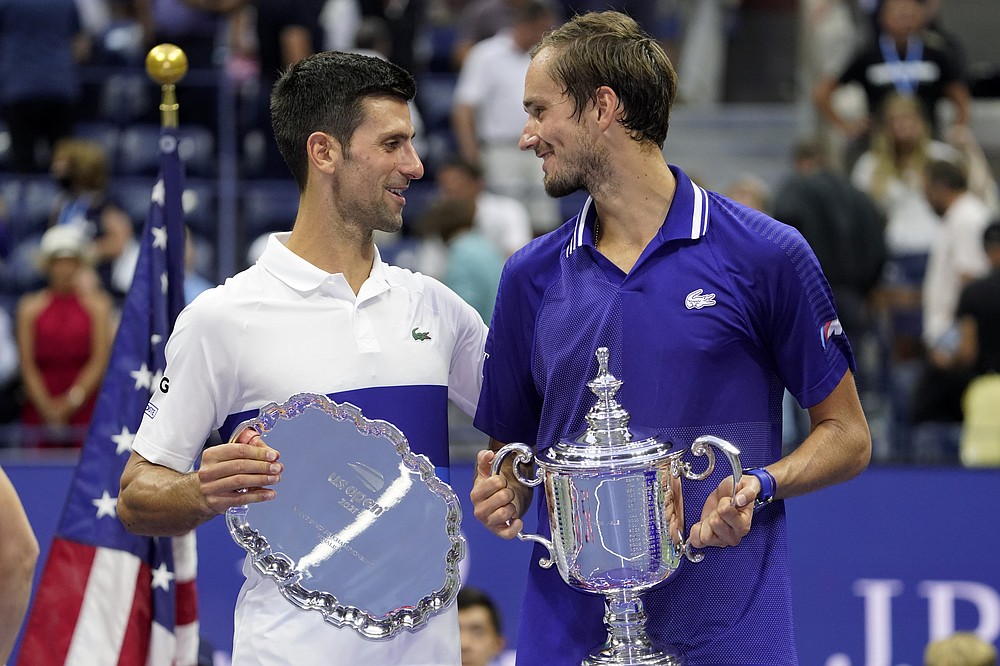 Novak Djokovic, of Serbia, left, and Daniil Medvedev, of Russia, talk during the trophy ceremony after the men's singles final of the US Open tennis championships, Sunday, Sept. 12, 2021, in New York. (AP Photo/John Minchillo)