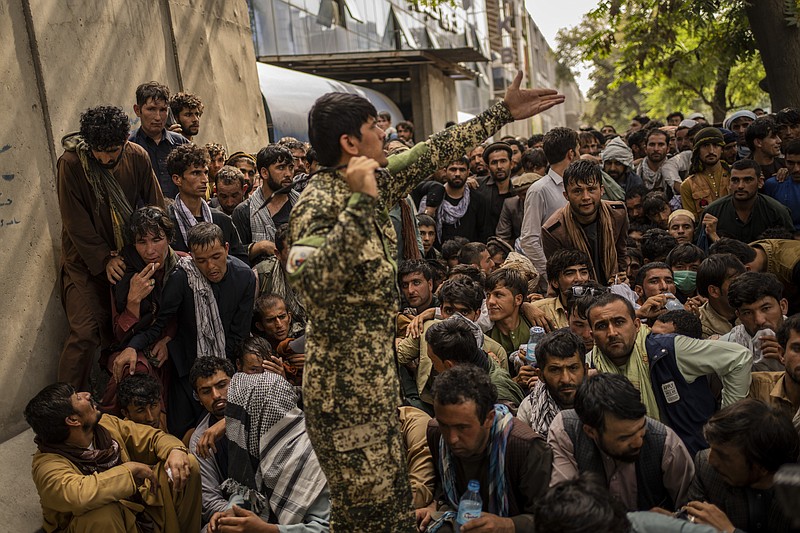 Afghans wait in front of a bank as they try to withdraw money in Kabul, Afghanistan, Sunday, Sept. 12, 2021. (AP Photo/Bernat Armangue)

GENEVA -- The United Nations drummed up more than $1.2 billion in emergency pledges Monday for helping 11 million Afghans facing an escalating humanitarian crisis in their homeland and millions more elsewhere in the region as the U.N. human rights chief voiced concerns about the Taliban's first steps in establishing power in the beleaguered and impoverished country.

At the first high-level conference on Afghanistan since the Taliban took power a month ago, Western governments, big traditional donors and others announced pledges that went beyond the $606 million that the United Nations was seeking to cover costs through the end of the year for protecting Afghans from looming humanitarian disaster.

U.N. humanitarian chief Martin Griffiths announced at the close of the ministerial meeting that more than $1.2 billion in humanitarian and development aid had been pledged. He said this included the $606 million sought in a "flash appeal" but also a regional response to the Afghan crisis that U.N. refugee chief Filippo Grandi spoke about after arriving in Kabul on a previously unannounced visit.

He wrote on Twitter that he would assess humanitarian needs and the situation of 3.5 million displaced Afghans, including over 500,000 displaced this year alone.

Officials at the U.N. refugee agency, UNHCR, have expressed concerns that more Afghans could take refuge into neighboring Pakistan and Iran, which both already have large numbers of Afghans who fled their country during the past decades of war.

Griffiths urged donors to turn Monday's pledges into cash contributions as fast as possible, saying "the funding will throw a lifeline to Afghans" who lack food, health care and protection. He said the meeting showed solidarity with the Afghan people but added that "Afghanistan faces a long and hard road ahead" and this "is far from the end of the journey."

It is feared Afghanistan could further plunge toward famine and economic collapse after the chaos of the past month, which saw the Taliban oust the government in a lightning sweep as U.S. and NATO forces exited the 20-year war.

"The people of Afghanistan need a lifeline," U.N. Secretary-General Antonio Guterres said at the opening of the conference. "After decades of war, suffering and insecurity, they face perhaps their most perilous hour. Now is the time for the international community to stand with them. And let us be clear, this conference is not simply about what we will give to the people of Afghanistan. It is about what we owe."

He said one in three Afghans don't know where their next meal will come from, the poverty rate is "spiraling" and basic public services are nearing collapse. A severe drought is jeopardizing the upcoming harvest, and hunger has been rising.

The U.N.'s World Food Program says Afghans are growing increasingly short of cash to buy food, the majority of which -- like wheat flour -- is imported. Frozen foreign exchanges and a paralyzed state budget have stripped people of the money they need just as food and fuel prices have risen.

As with many other U.N.-led donor conferences, some countries injected more funds, while others highlighted commitments already made. German Foreign Minister Heiko Maas announced plans for Germany to pour 500 million euros ($590 million) into Afghanistan and its neighboring countries, but specifics were not immediately provided. Denmark said it would give an extra $38 million and Norway promised $11.5 million.

At the same time, officials suggested aid in the future could be affected by how the Taliban rules.

Linda Thomas-Greenfield, the U.S. ambassador to the United Nations, said the U.S. was "committed to providing humanitarian assistance" for and supporting Afghans, and would add $64 million in new assistance for U.N. and partner organizations. That brings the U.S. total for Afghanistan to $330 million in this fiscal year, she said.

"We need oral and written commitments made by the Taliban about operating rights of humanitarian agencies and the treatment and rights of minority groups, women and girls to be upheld," she said by video message. "Words are not good enough. We must see action. The international community is unified in this message."

Germany's Maas, speaking to the Human Rights Council also in Geneva, said the world has a "moral obligation" to help Afghans. But he also said the level of the Taliban's respect for human rights, particularly of women and girls, would be a "benchmark for us and our partners in determining our future engagement with a new Afghan government."

He criticized the Taliban's decision to exclude other groups from their recently announced interim government, saying it was "not the right signal" for international cooperation and stability.

The world has been watching closely to see how Afghanistan under a Taliban government might be different from the first time the Islamic militants were in power from 1996 to 2001. During that era, the Taliban imposed a harsh rule by their interpretation of Islamic law. Girls and women were denied an education and were excluded from public life.

The U.N. human rights chief, Michelle Bachelet, warned of a "new and perilous phase" for Afghanistan as she upbraided the Taliban for a disconnect between their words and actions.

Speaking to the rights council, she said her office has received credible allegations of reprisal killings by the Taliban of former Afghan security forces as well as instances in which officials in the previous government and their relatives were arbitrarily detained and later turned up dead.

Bachelet cited multiple allegations of Taliban forces conducting house-to-house searches looking for specific officials in the previous government and people who cooperated with U.S. forces and companies. She said that over the last three weeks, women have been progressively excluded from the public sphere, in contradiction to Taliban assertions to respect women's rights. 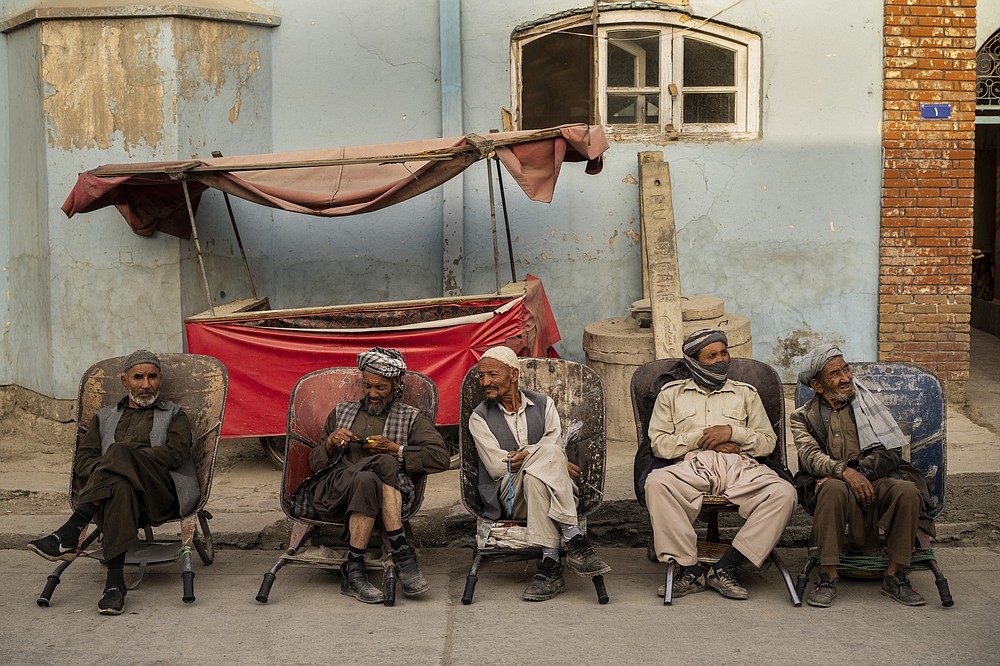 Laborers wait in the street to be hired, in Kabul, Afghanistan, Sunday, Sept. 12, 2021. (AP Photo/Bernat Armangue) 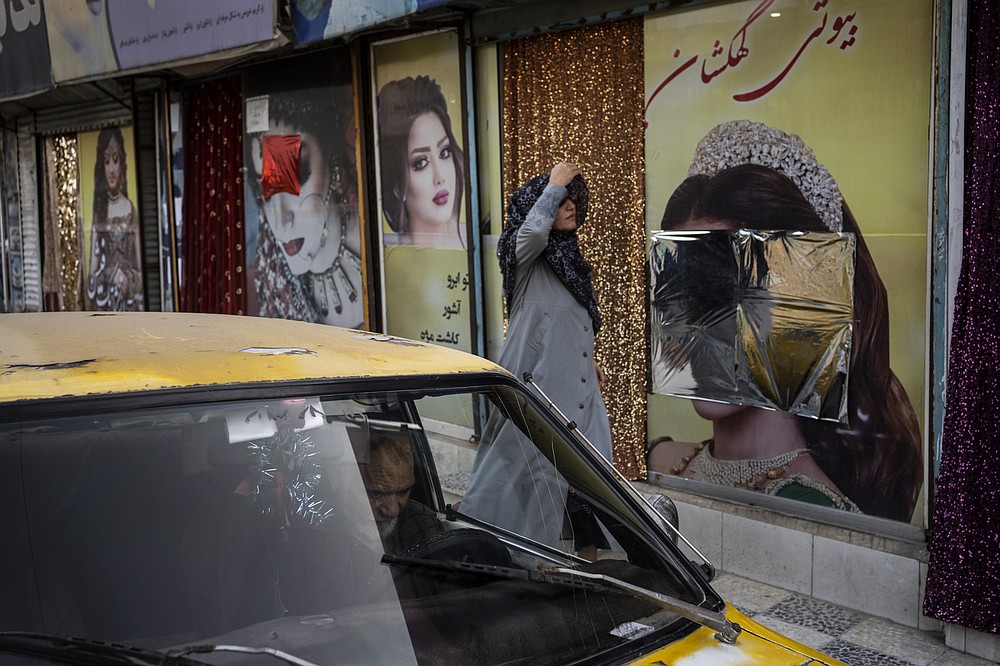 An Afghan woman walks past beauty salons with defaced window decorations, in Kabul, Afghanistan, Sunday, Sept. 12, 2021. Since the Taliban gained control of Kabul, several images depicting women outside beauty salons have been removed or covered up. (AP Photo/Bernat Armangue) 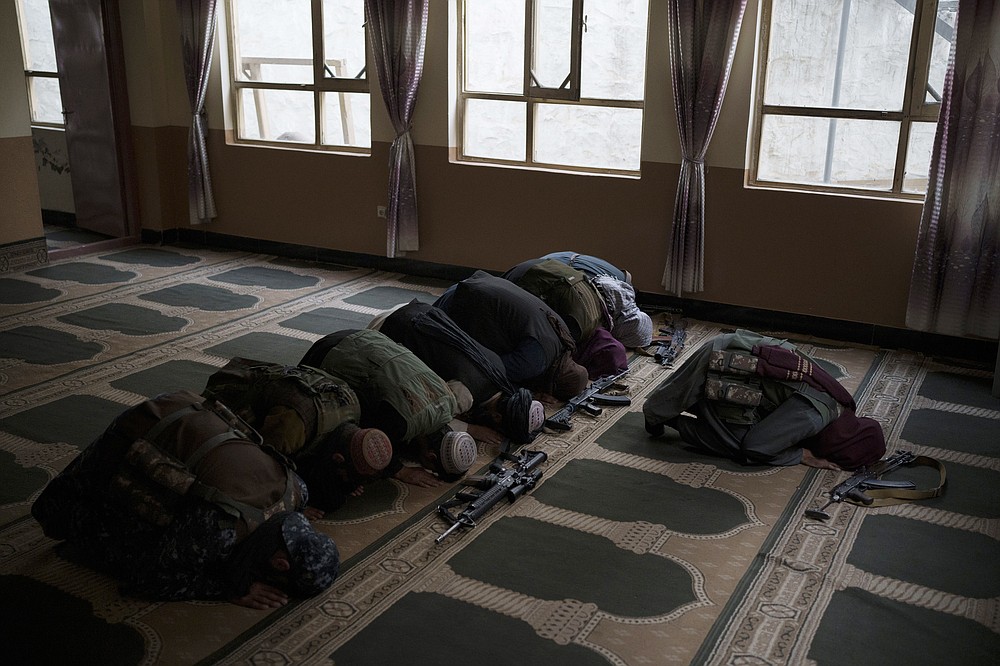 Taliban members lay their weapons down as they pray inside a mosque in Kabul, Afghanistan, Sunday, Sept. 12, 2021. (AP Photo/Felipe Dana) 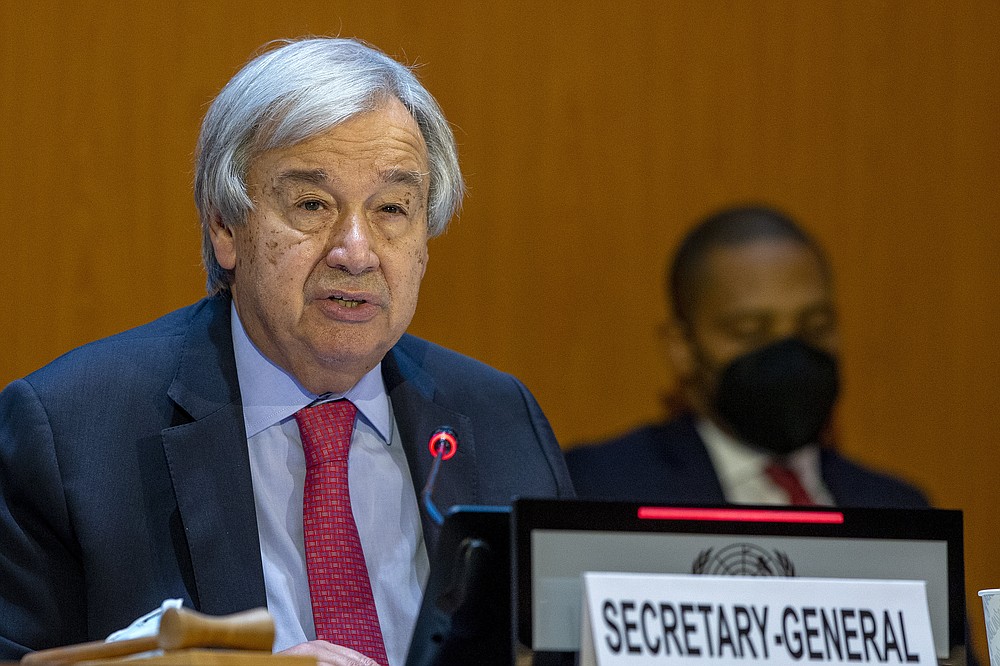 U.N. Secretary-General Antonio Guterres, addresses his statement, during the High-Level Ministerial Event on the Humanitarian Situation in Afghanistan, at the European headquarters of the United Nation, in Geneva, Switzerland, Monday, Sept. 13, 2021. (Salvatore Di Nolfi/Keystone via AP)