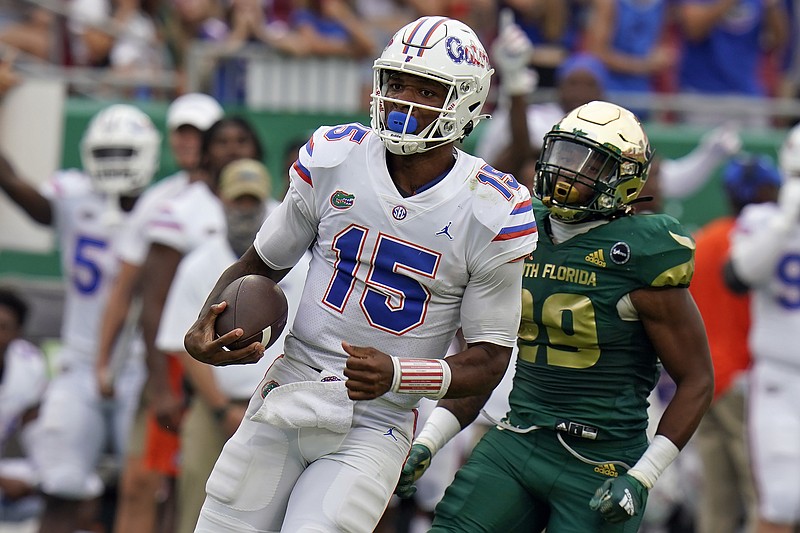 Florida quarterback Anthony Richardson (15) gets past South Florida linebacker Brian Norris (29) on an 80-yard touchdown run during the second half of an NCAA football game Saturday in Tampa, Fla. - Photo by Chris O'Meara of The Associated Press

GAINESVILLE, Fla. -- Florida backup quarterback Anthony Richardson, one of college football's more dynamic players through two games, is expected to practice this week while recovering from a strained right hamstring.

How much or how early he plays against top-ranked Alabama on Saturday remains to be determined.

Coach Dan Mullen offered little insight Monday into his decisions at the all-important position leading into what could be a program-defining game for the No. 11 Gators (2-0), who have lost seven in a row to the defending national champion Crimson Tide (2-0).

This much is certain: Mullen plans to ignore outside calls for Richardson to play over inconsistent starter Emory Jones.

"I'll be honest with you; I don't listen to many suggestions," Mullen said Monday. "If you're in our staff meeting, I'm going to listen to your suggestion. I don't run down to Shands Hospital and say, 'Boy, I think you should really do that procedure this way.' I think those guys probably got that under control, you know? So, they're the people, they're the experts who are doing it."

Richardson has been impressive off the bench, raising questions about him supplanting Jones in the lineup. The redshirt freshman from Gainesville had a 73-yard touchdown run in the opener and was even better in a 42-20 win at South Florida last Saturday.

He connected on TD passes of 75 and 40 yards to Jacob Copeland and scampered for an 80-yard score.

He had fans screaming one second and gasping the next when he grabbed his hamstring at the end of that last run. He sat out the rest of the game, leaving Florida faithful wondering about his health and, more importantly, his availability against Alabama.

Mullen might prefer to keep the Tide guessing, too.

"I don't think you prepare differently," Alabama coach Nick Saban said Monday. "Both guys have the ability to make plays passing and they run the same sort of quarterback runs with both guys and both guys are really talented in both areas.

"When the quarterback can run and they run quarterback runs, it's almost like playing against 'wildcat.' ... They've got an extra blocker, but they also have the ability to make big plays in the passing game."

Richardson has 275 yards rushing and two touchdowns on just 11 carries. He has completed 6 of 11 passes for 192 yards and two scores.

Jones, meanwhile, has 264 yards passing, with two touchdowns and four interceptions. He has 155 yards on the ground and a score.

Mullen has been steadfast that Jones gives the Gators a better chance to run their entire offense.

He pointed to a play in the opener against Florida Atlantic in which Richardson missed a pre-snap protection check, missed a hot throw against the blitz, missed the primary receiver and then scrambled for a big gain.

"Everybody thinks, 'What a spectacular play!'" Mullen said.

Despite all the attention Florida's seemingly unsettled QB situation has received, Mullen credited both players for not allowing it to become a distraction. He said they've supported and congratulated each other at every turn -- publicly and privately.

"You want to see people succeed that way." 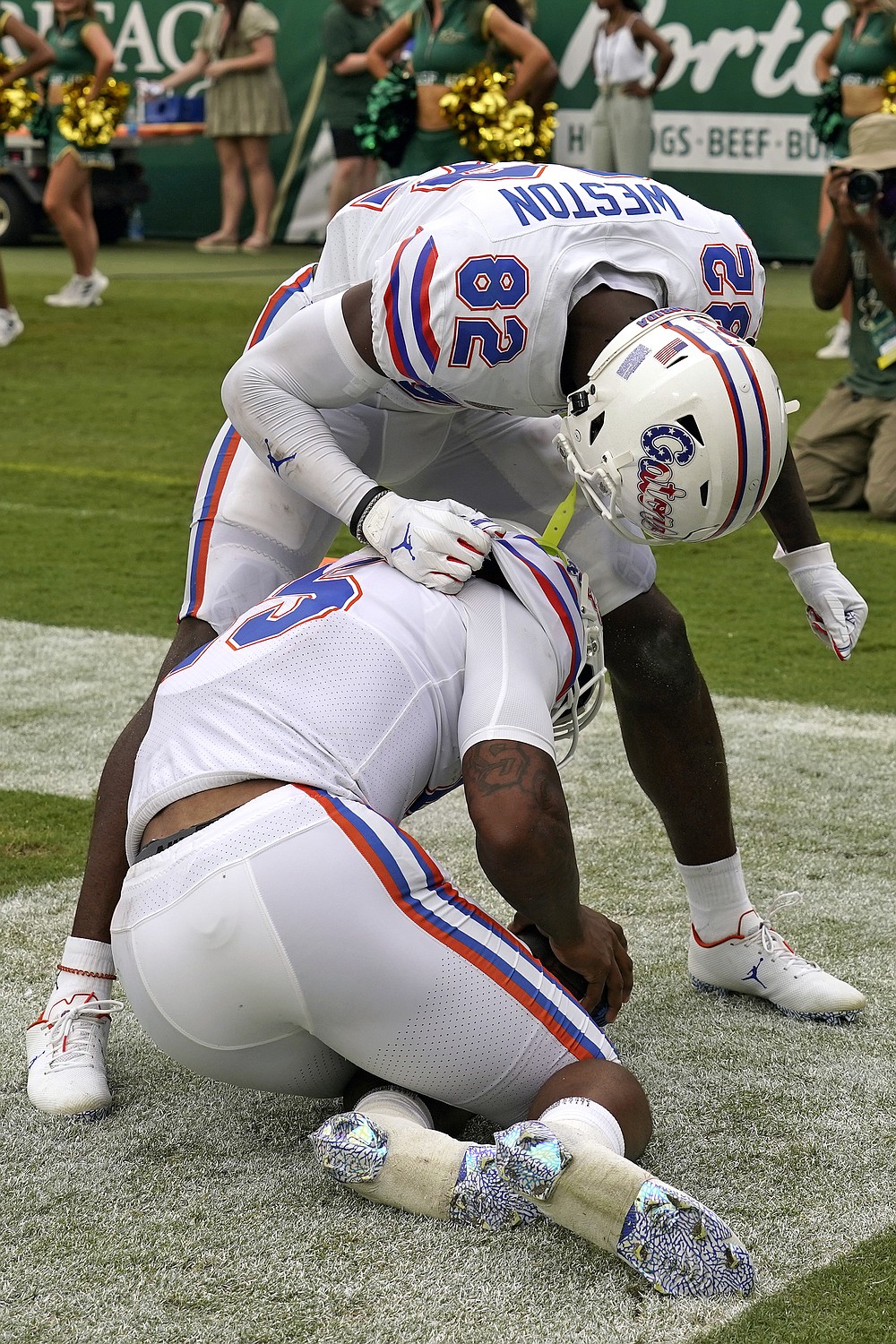 Florida quarterback Anthony Richardson is helped by wide receiver Ja'Markis Weston (82) after Richardson was injureed on an 80-yard touchdown run against South Florida during the second half of an NCAA college football game Saturday, Sept. 11, 2021, in Tampa, Fla. (AP Photo/Chris O'Meara) 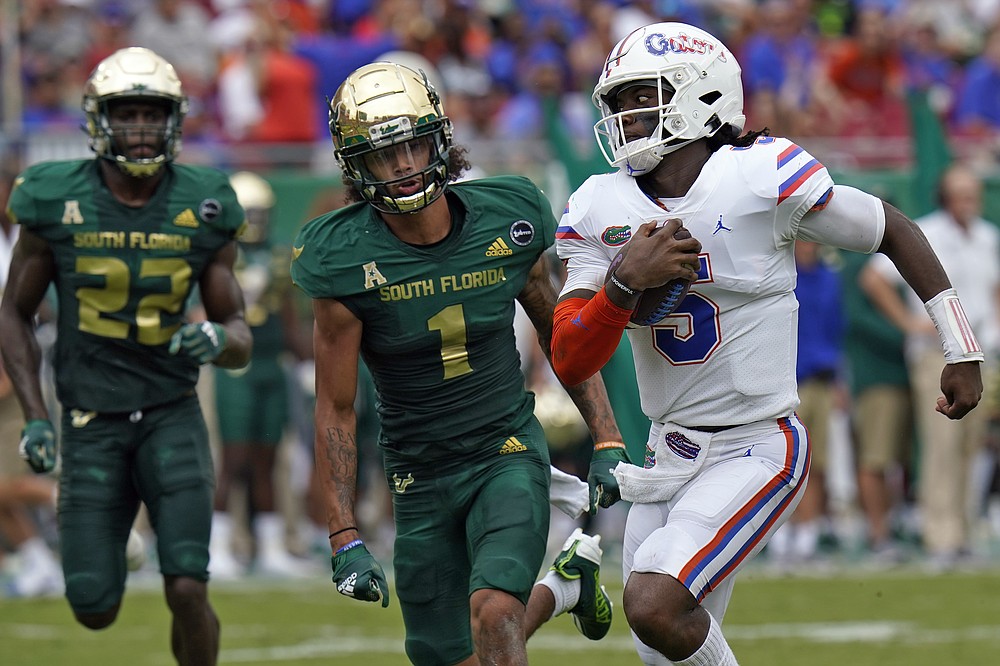 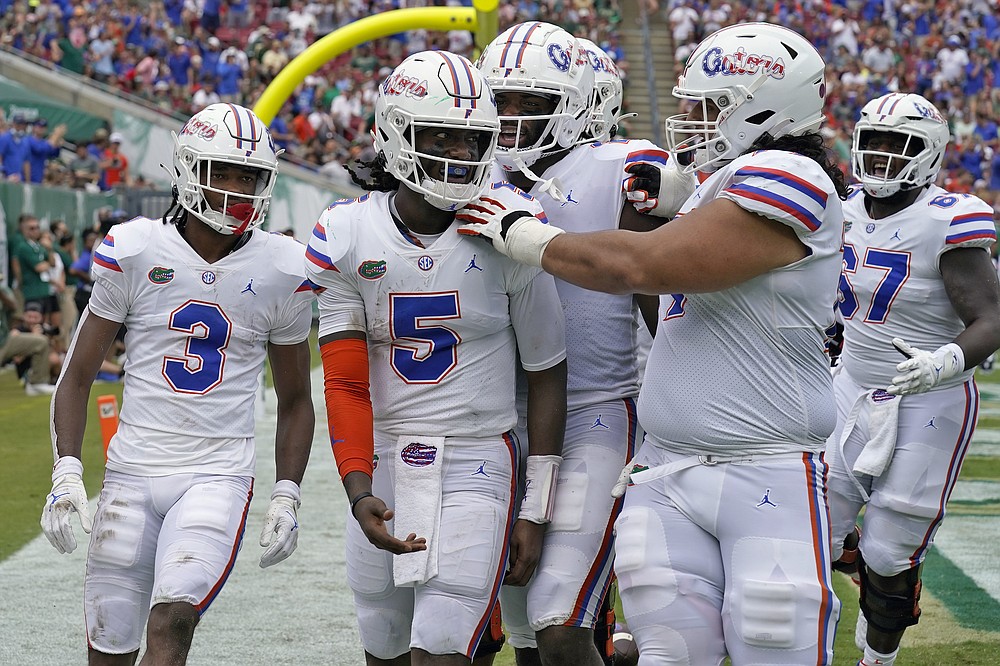 Florida quarterback Emory Jones (5) celebrates with teammates after his touchdown run against South Florida during the first half of an NCAA college football game Saturday, Sept. 11, 2021, in Tampa, Fla. (AP Photo/Chris O'Meara) 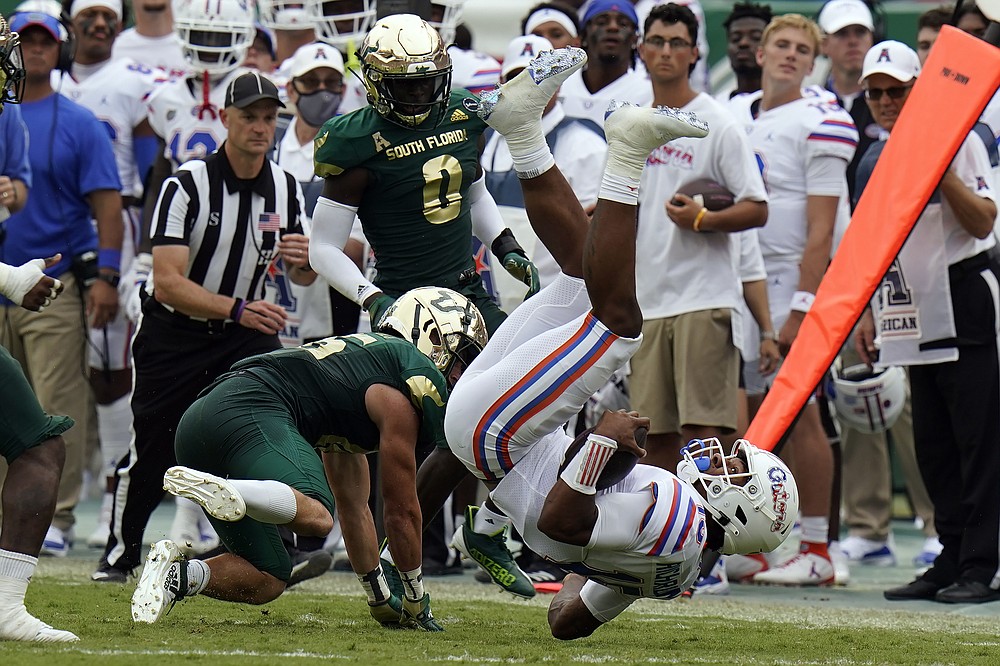 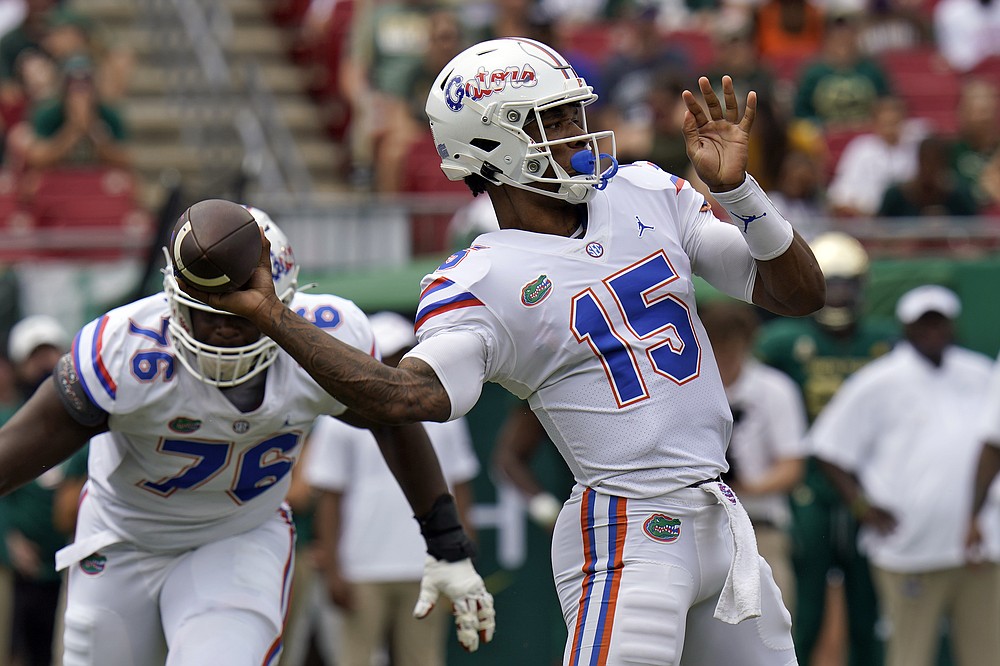