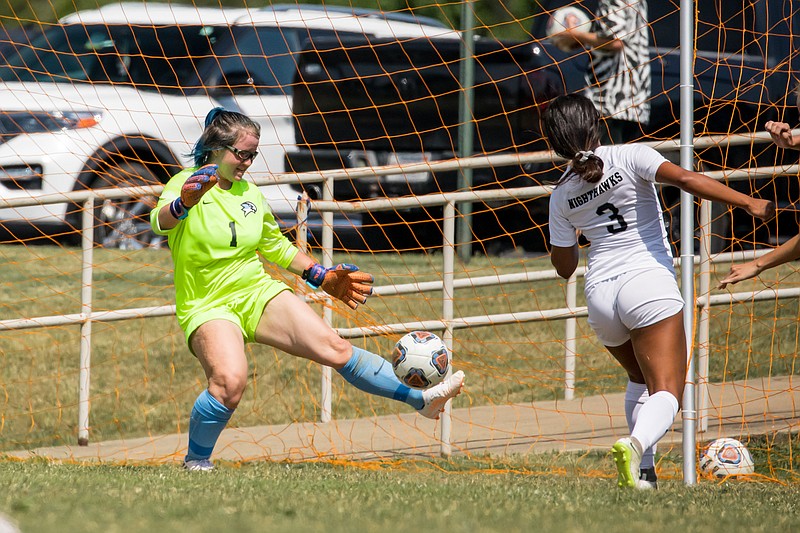 Northern Oklahoma-Tonkawa took a pair of wins over National Park's men's and women's soccer teams Sunday with the No. 16 Lady Mavericks winning 9-0 and the No. 13 Mavericks taking a 6-0 win.

The Lady Mavericks hit a penalty kick at the seven-minute mark to take an early lead as the Nighthawks (1-5) struggled offensively. NOC-Tonkawa continued to press as it took a 5-0 lead at the break.

NPC had three attempts in the second half, but it was unable to break through a tough defense. The Lady Mavericks added four more goals in the period to serve up NPC's second-straight loss.

Freshman goalkeeper Brooklyn Mize picked up 19 more saves in the loss, and she continues to lead the NJCAA Region II with 90 saves this season.

The Nighthawk men (0-4) battled toe-to-toe against the Mavericks until the visiting team found the corner of the frame at the 27-minute mark to take the lead. NOC-Tonkawa added two more over the next 10 minutes to take a 3-0 lead into intermission.

Freshman keeper Xavier Marquez had a pair of saves in the match.

Both Nighthawk teams face UA Rich Mountain Thursday in Mena with the women taking the pitch for a noon opening kick and the men following at 2 p.m.

The Bulldogs put up a team score of 332 for the win with Lake Hamilton (366) finishing second and Fountain Lake (368) finishing third. Hot Springs also played at the match, but it did not have enough players for a team score.

Greenwood's Chris Daggs earned medalist honors with a low round of 78 with teammate Jake Spoon (80) earning runner-up medalist honors as all six of the team's players scored under 100.

Zac Pennington led the Wolves with a low round of 84, Peyton Garner shot an 88, Cade Robinson had a 92, Jack Higginbotham finished with 102, and Brode Horton rounded out the scoring with a 105. Lake Hamilton's junior varsity golfers included Ben Varner (106), Raney Foster (113) and Jake Spruill (121).

"We had some very good play, and we also had some struggles from all the teams as Glenwood is a tough course to walk," Lake Hamilton head coach Brandi Higginbotham said. "Zac Pennington and Jack Higginbotham had their season lows for Lake Hamilton boys scorers. Jake Spruill also had his low score for the JV."

Cade Miller and Warren Hedrick led the Trojans with rounds of 89 while Jacob Wisener shot a 104.

In the girls match, the Lady Bulldogs finished with a team card of 291 for the win while the Lady Wolves turned in a 335. Fountain Lake did not have enough players for a team score.

Hallie Jones earned medalist honors with a low round of 87 as her five teammates on the course shot under a 120.

Ginny Higginbotham earned runner-up medalist honors with a card of 93. Jordyn Garner shot a 115, Kenley Kincannon had a 127, and Reagan Carrouth shot a 128 to round out the scoring.

"Our girls played their first round of 18 as they have been rained out and cut short in another match due to lightning," Higginbotham said.

The Tigers (2-0) jumped from 11th to No. 9 in the American Fooball Coaches Association poll, which matches the NCAA.com Power 10 rankings, which did not have the Tigers ranked previously. OBU leaped to No. 8 from 11th in the D2Football.com poll.

Harding, which was ranked No. 12 in the D2Football.com poll last week, dropped to 24th after its 35-34 loss to Southeastern Oklahoma State. The Bisons dropped out of the polling in the AFCA poll as Henderson State moved into No. 25 after a 55-7 thrumming of Northwestern Oklahoma State.

The Tigers host Arkansas Tech Saturday at 6 p.m. The Reddies travel to Monticello to face the Arkansas-Monticello Boll Weevils, and Harding travels to Magnolia to face Southern Arkansas.

Roe led the Mulerider defense with a game-high 10 tackles in a 42-27 win over Southwestern Oklahoma State. Roe also had an interception.

Williams returned four kickoffs for 124 yards as SAU rallied past the Bulldogs. His 62-yard return, the longest of the day, opened up the second half for the Muleriders. Two of his returns set up SAU touchdowns.

Castillow and the Tigers won three matches at the Pioneer Classic last week as she picked up 124 digs on the week, averaging 5.64 digs per set. She tallied four 20-dig performances, including 39 in a five-set contest against UT-Permian Basin. She also ended up with a double-double (26 digs, 10 assists) against Southwest Baptist.

Benoit hit .513 in a 4-0 weekend at the Pioneer Classic with wins over Florida Tech, Southwest Baptist, UT Permian Basin and Texas Woman's. Against Texas Woman's, Benoit totaled 14 kills with a .632 hitting percentage and 16.5 points while averaging 3.20 kills per set and 3.7 points per set in the tournament.

Buell led the No. 12 Bison to three wins. Oklahoma Baptist defeated St. Edward's Ferris State and West Alabama in three-set sweeps. She averaged a GAC-leading 10.11 assists per set with a pair of double-doubles.