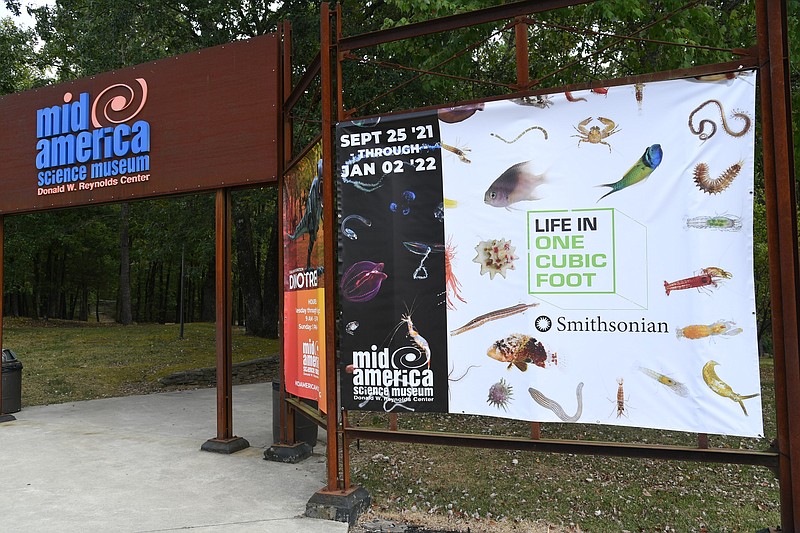 A banner for the new Smithsonian traveling exhibit, “Life in One Cubic Foot,” opening Sept. 25 hangs at Mid-America Science Museum. - Photo by Tanner Newton of The Sentinel-Record

Mid-America Science Museum will host the first Smithsonian exhibit in its new exhibit hall when "Life in One Cubic Foot" opens on Sept. 25 and runs through Jan. 2.

"We're pretty excited about it," said Dylan Kuchel, the museum's director of exhibits, buildings and grounds.

"It's one of the whole points of getting the new building in the first place. Being able to host big exhibitions like that," Kuchel said.

"We're excited to get it in the new gallery, because that's why the gallery was built, to house these Smithsonian exhibits, so this is the first of many," said Diane LaFollette, the museum's executive director.

Mid-America previously hosted the Smithsonian exhibit "Star Wars: Art of the Starfighter" in 2002 in the original museum building. The exhibit hall expansion, which city voters authorized in September 2018, hosted its inaugural traveling exhibit, "Bionic Me," beginning in May 2020, but this is the first Smithsonian exhibit the new hall has hosted since its completion.

"The exhibition follows the research of Smithsonian scientists and photographer David Liittschwager as they discover what a cubic foot of land or water -- a biocube -- reveals about the diversity of life on the planet," a news release said.

Kuchel said the new exhibit "encompasses just biodiversity from all across the world. It's animals and it's just all kinds of creatures, whether it's native stuff that we might be familiar with around here, just in our own backyard or from forests, to aquatic life from various oceans across the world to just exotic creatures of all sorts from multiple continents."

"A biocube -- the tool at the heart of the exhibition -- is a 1-by-1-by-1-foot framed cube that organisms from the surrounding environment can enter and pass through. Biocubes featured in the exhibition were placed in environments across the globe to learn what forms of life, both known and unknown, could be found in the cube during a 24-hour period. In addition to exploring life through the exhibition, visitors are also invited to participate in citizen science and uncover the biodiversity in their backyard by creating and monitoring their own biocube," the release said.

"What they did, they took literally one cubic foot and they took videos -- they saw over one day, in that cubic foot, the different biodiversity of life that's happening in that one single cubic foot," Kuchel said. "And from looking at it at a micro-scale, it gives you a better understanding of nature on a macro-scale."

He said the cubes range from leaves and brush to "having one of these cubes thousands of feet under the ocean."

There are four videos that play in the exhibition, but "most of it is just showing examples of what scientists have found through studying this," Kuchel said.

"We were already looking into trying to get some sort of Smithsonian exhibition here for our new building. It's just the start of a beautiful relationship," he said.

"The Smithsonian brings us a new level of interactivity and research and education to Hot Springs and the southwest part of the state that (we) would not normally have access to, so being an affiliate means we can bring that much more to our community," LaFollette said.

Kuchel said getting approval to host the exhibit wasn't easy, noting, "It's taken a few steps. We've had to go through humidity controls and environmental controls so that we could even host this exhibition."

The release said the exhibition is organized by the Smithsonian Institution Traveling Exhibition Service in collaboration with the Smithsonian's National Museum of Natural History.

"Life in One Cubic Foot" is being sponsored by Red Oak Ridge and Weyerhaeuser and the exhibit's education partner is Hot Springs National Park, which LaFollette noted is "assisting us in having bio-cubes in the park."

She said they are also going to put in bio-cubes at the Arkansas School for Mathematics, Sciences, and the Arts, National Park College and at the Garland County Library. The cubes will be ones made by the staff at Mid-America.

"Longhua's exhibition was fantastic," he said, noting the exhibits in the museum are usually more technology-based.

"It was a pretty interesting experience, getting to see everything from just his artwork and his collaboration with his grandson, which I had never heard of anything like that before. I thought that was pretty interesting," he said.

"They go into the Longhua exhibit and it's just very calming and soothing and relaxing, and the activities in there are very contemplating, so people would come in and kind of change their behavior, out of respect for the space but also the art on the walls, so that was interesting to see," she said.

"I'm very happy with the new building, it was a godsend," Kuchel said.