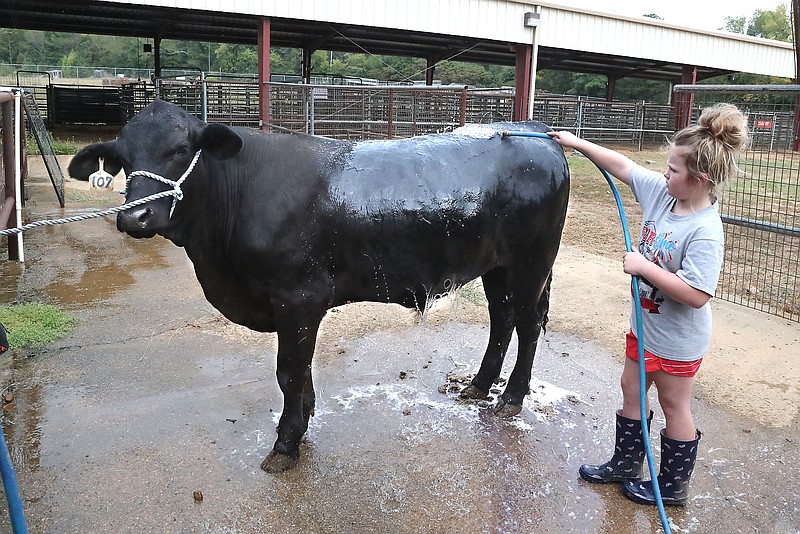 Milli Radley, of Hot Springs, gives her Brangus bull, Money Man Filet, a bath on Monday at the Garland County Fairgrounds in preparation for today's beef cattle judging. - Photo by Richard Rasmussen of The Sentinel-Record

While last year's Garland County Fair was slightly scaled back to include the rodeo and demolition derby but no carnival rides due to the COVID-19 pandemic, this year's fair continues in full force as crowds make their way into the fairgrounds this week.

James Parker, president of the 2021 Garland County Fair & Livestock Association board of directors, said Tuesday attendance has been good so far and he expects even more people to show up throughout the rest of the week.

Though concerns over the COVID-19 pandemic and spread of its new delta variant still loom in the minds of the nation's public, Parker said precautions are being taken and those attending, for the most part, are just having fun and enjoying the festivities.

"Well, I don't think they're really even thinking about it that much," he said. "I mean, they're just coming in, enjoying themselves. We're just kind of going by the guidelines that the people. ... You know, we could have our restrictions up for whatever it is, but they just do as they want to when they come in.

"There's been very few people with masks come in and that's at their discretion. We aren't requiring a mask. But so far it's been a pretty good fair. Had a good derby this past weekend and the animals started coming in over the weekend in our exhibits, so we should pretty well have a full fair this afternoon -- everything," Parker said. "Most of the exhibits are in. I think the cattle will all be in today."

This year marks the 14th for the fair to be held at its current location at 4831 Malvern Ave. After kicking off last Thursday with the cultural arts on-site registration, the carnival, pageant rehearsals and demolition derby began Friday as other events and activities come onto the scene this week.

In addition to the indoor car show, horse show and other activities starting Thursday, the ever-popular rodeo will be held Friday and Saturday starting at 8 p.m.

Parker said he's really glad to have the carnival aspect of the fair back this year.

"We've had a lot of interest in the carnival," he said. "You know, the rides. I think people just want to get out. Been kind of cooped up so long and I think that's one of the things that made our derby a success this year. Even though we had ballgames and things going on, we still had a pretty decent crowd on Friday night. Last year we had a little fair, but it was a demolition derby and rodeo -- no carnival. And it was pretty good for what it was but we were fortunate. A lot of fairs didn't have anything. But we have a good carnival (this year) -- a good, clean carnival."

As in most years' past, Parker believes the upcoming rodeo will be the main attraction. The fair will once again host a Professional Rodeo Cowboys Association rodeo. Headquartered in Colorado Springs, Colo., PRCA is the oldest and biggest rodeo-sanctioning body in the world. Contestants participating this year include Mary Walker, Fallon Taylor, Cody DeMoss, Junior Nogueira, Jacob Talley and Tyler Waguespack.

"Well, I think, hopefully, our big attraction will be the rodeo," Parker said. "And it seems like it has grown a little more every year. We just got into PRCA three or four years ago and we've had good turnouts for it. Hopefully this year we'll have a better one."

"I think our county fair is important, you know, for the county and all counties," he said. "It lets everybody see the, you know, animals. It gives them something to do during the year to look forward to, and we have a good program in our livestock area. Some of the areas are down a little bit this year because, I think, you know, there's getting to be less and less kids involved, and mostly because, you know, they don't have a place to raise it.

"There's very few farms anymore. But what we do have is good and it's been a pretty good -- the FFA instructors do pretty well with their departments and that helps a lot. But I think this week will be a good week. I think we'll have a lot of people show up to look at, you know, to see the animals, to go to the rodeo, go to midway. We had a lot of calls as far as interest in, you know, what's going on and the times, so I think we'll have a good week." 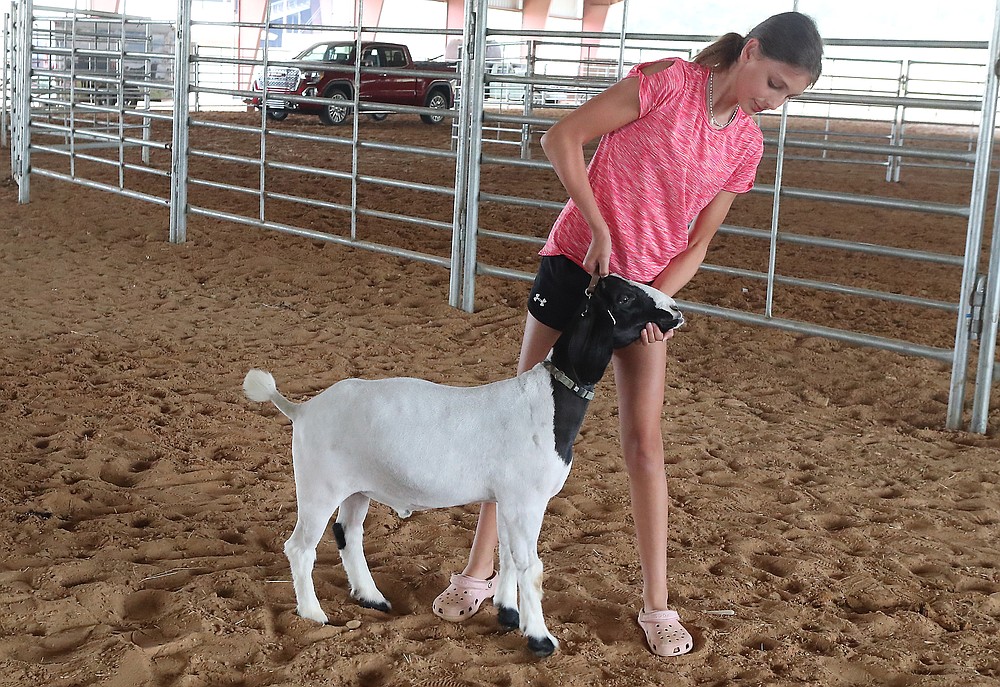