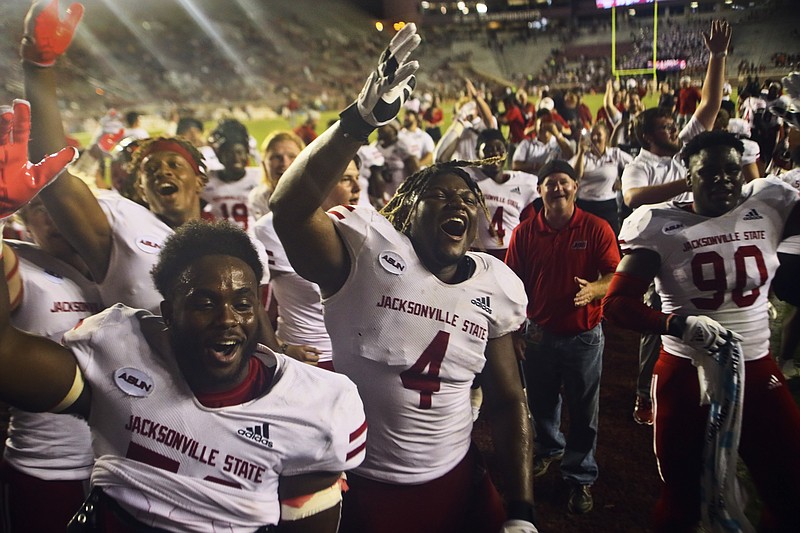 Jacksonville State players celebrate after a 20-17 win against Florida State on Saturday in Tallahassee, Fla. - Photo by Phil Sears of The Associated Press

Greg Seitz has been at Jacksonville State for nearly three decades, through a Division II national championship, conference titles and FCS playoff runs.

But the Gamecocks athletic director and longtime staffer has never seen anything quite as big as that walk-off Hail Mary to beat Florida State 20-17 last Saturday night.

"When you consider just where that program has been ... I think that probably in my mind is probably the biggest win in Jacksonville State football history," Seitz said.

It may not have even the biggest FCS win so far this season, however. It's only mid-September and FCS teams have eight wins over FBS programs, most notably Jacksonville State's upset and Montana's opening 13-7 win over then-No. 20 Washington.

It's the most such wins in a season since FCS teams pulled off nine of them in 2017. And they're just getting started, perhaps benefitting from spring seasons that served as defacto training camps.

"You feel like you just finished playing because you did just finish playing, but (it's) not something we want to do every year," Grass said. "But I think you have seen some FCS wins over FBS and some of them really good FCS teams played some bad FBS teams.

"Every game's got a life of its own. Sometimes I think FBS teams overlook FCS teams."

Jacksonville State provided not only a huge upset of a three-time national champion, but a fantastic finish.

To Seitz, it was bigger than the 1992 Division II championship game victory, and the double-overtime upset in 2010 of Mississippi from the mighty Southeastern Conference.

This was Florida State, winner of its third national title not so long ago in 2013. The Seminoles had won their first 26 meetings over FCS, or Division I-AA, teams, though they also trailed Jacksonville State early in last year's meeting.

Zerrick Cooper launched the desperation pass deep to Damond Philyaw-Johnson, who hauled it in just inside the 20-yard line and made a quick cut on his way to a 59-yard touchdown. That followed a 97-yard touchdown march ending with just under five minutes left.

It was the same play call Jacksonville State had tried on the previous play, and coaches had urged Cooper to look for Philyaw-Johnson.

The game winner was a landmark moment not just for the Gamecocks, who normally are quietly tucked away in the northeast Alabama town of Jacksonville, which has fewer than 13,000 residents.

It also was big for Cooper, a onetime highly rated prospect who spent two seasons as a backup for Florida State's ACC rival Clemson. The three-year starter and senior suffered a season-ending injury in a win over FBS Florida International last fall and missed the spring season.

Cooper said he has watched that final play "probably over 1,000 times." Linebacker Stevonte Tullis figures he savored the moment until about dawn Sunday.

"I know I'm going to live with that for the rest of my life," Cooper said, "and I'm going to be able to tell my kids about it."

Philyaw-Johnson, who's from Pensacola, Florida, had a single catch for 1 yard in the first two games before that Hail Mary.

Jacksonville State joined the Atlantic Sun Conference in July after capturing its sixth Ohio Valley title in seven seasons. They're in a transition year that includes schools moving to the Western Athletic Conference.

Jacksonville State collected $400,000 for the Florida State game but the win generated an abundance of priceless attention for the Gamecocks, typically overshadowed in the state by SEC teams Alabama and Auburn.

Seitz said the Web site's traffic was 500% higher than normal Saturday night and Sunday morning. The Gamecocks woke up to their highlight on ESPN's "SportsCenter" and the play topping the program's top 10 list. It's drawn more than 1 million views on social media.

It's the type of free publicity Jacksonville State could never have afforded with a total athletic budget of about $18 million. And the memories, well, they will definitely endure.

"That play will be remembered forever as well as that game," Grass said. "We go down in history and nobody will ever take that away from us."

The same thing can said by a few other FCS wins vs. FBS schools this season, including:

-- Montana scored 10 points in the fourth quarter and stopped Washington on its final two drives in the opener for both teams. It was the first time an FCS team beat a ranked FBS team since North Dakota State beat No. 13 Iowa 23-21 in 2016.

-- Holy Cross, which does not give football scholarships, never trailed in the second half and beat Connecticut 38-28, its first victory against an FBS team since it topped Army in 2002. The next day, UConn coach Randy Edsall said he would retire as season's end. The following day, he was dismissed.

-- East Tennessee State beat Vanderbilt 23-3, spoiling the debut of Clark Lea as the head coach at his alma mater. The victory, secured with three fourth-quarter turnovers, was ETSU's first over a Power Five program since it beat North Carolina State on Nov. 7, 1987.

-- South Dakota State, which lost in the FCS championship game 3 ½ months earlier, opened a 35-10 lead and beat Colorado State 42-23. It was the Jackrabbits' first win against an FBS team since they beat Kansas in 2015. 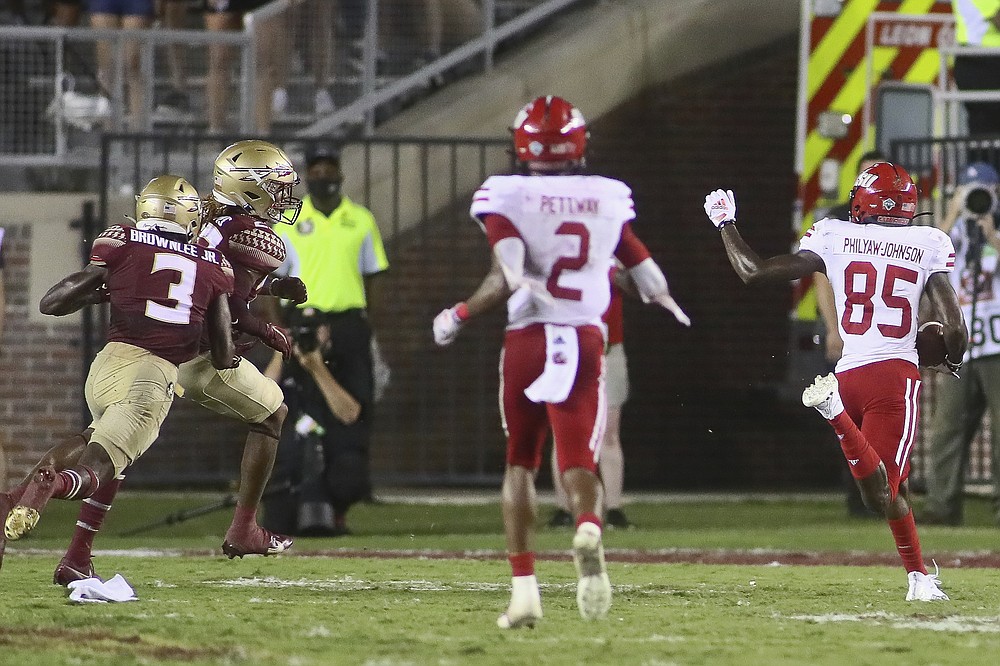 Jacksonville State's Damond Philyaw-Johnson (85) heads for the end zone after catching a pass for the winning touchdown at the end of the fourth quarter in the team's NCAA college football game against Florida State on Saturday, Sept. 11, 2021, in Tallahassee, Fla. Jacksonville State won 20-17. (AP Photo/Phil Sears) 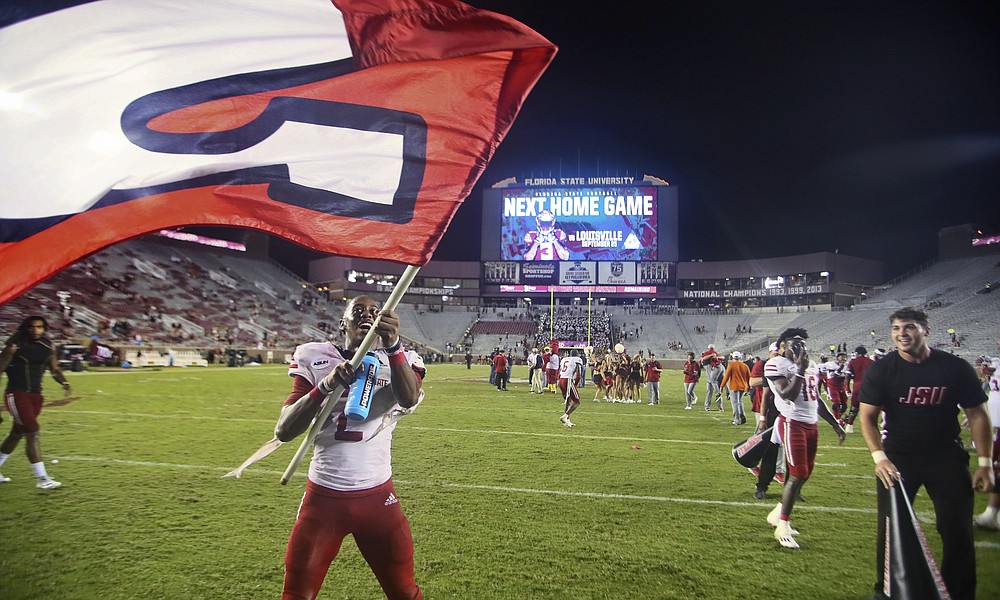 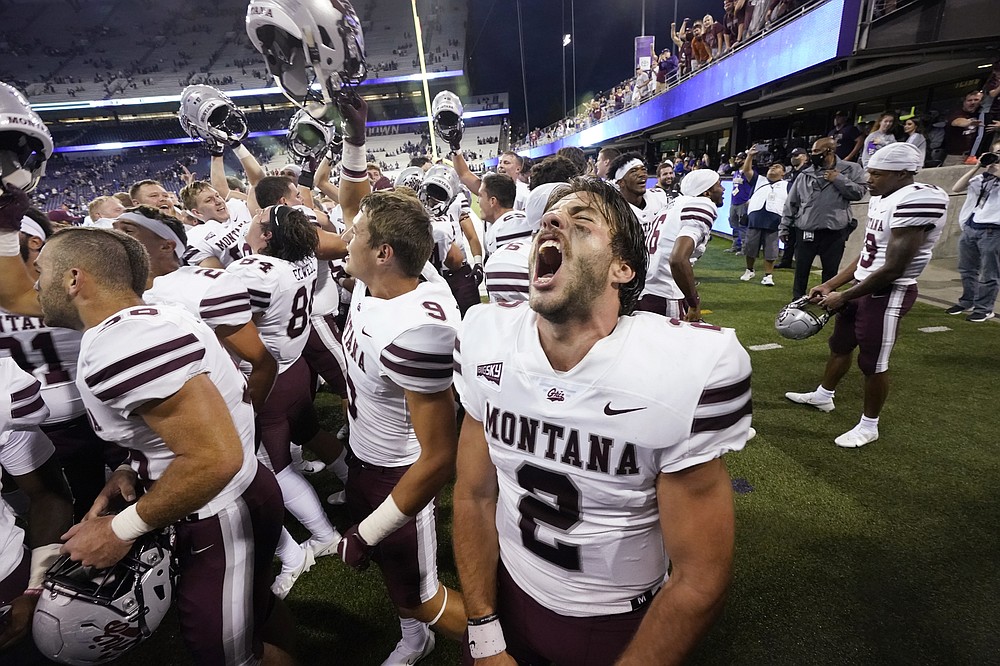 Montana quarterback Cam Humphrey lets out a yell as he celebrates with teammates after they beat Washington in an NCAA college football game Saturday, Sept. 4, 2021, in Seattle. Montana won 13-7. (AP Photo/Elaine Thompson) 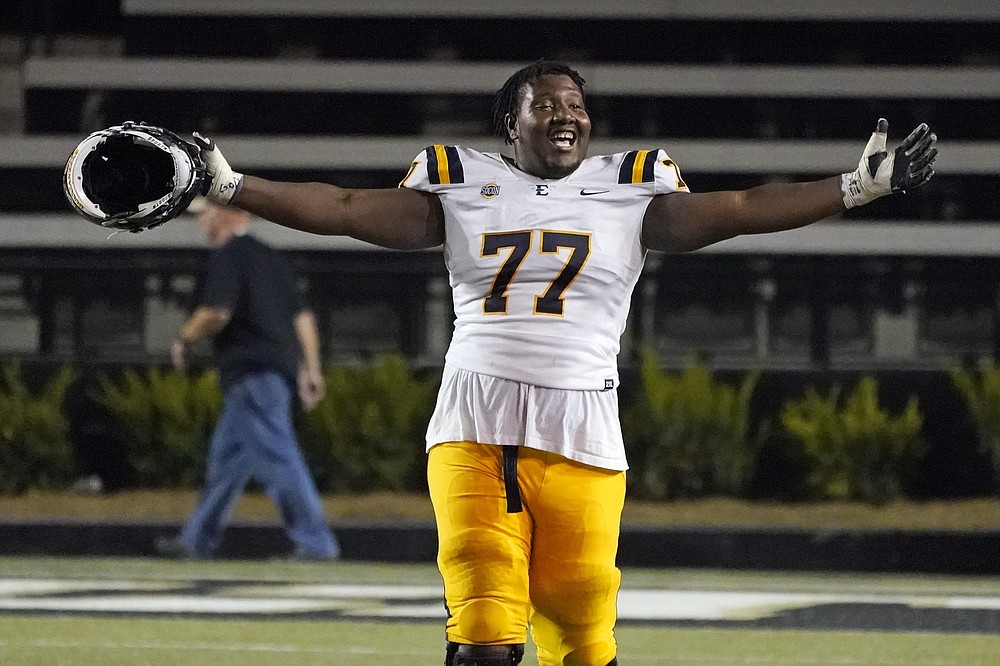