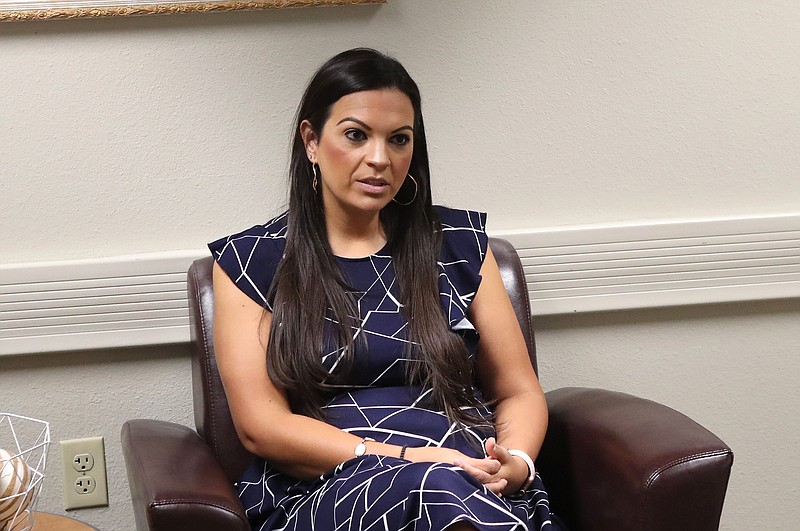 National Park College Health and Safety Program Manager Jessica Ellis discusses the incidence of COVID-19 at the college on Wednesday. - Photo by Richard Rasmussen of The Sentinel-Record

Although numbers are now trending downward, 28% of all the cases at National Park College have been reported in the last two and a half months, since the most recent surge of COVID-19 with the rise of the delta variant.

Ellis said the reason the two categories have similar numbers is due to vaccinations drastically reducing the need for quarantine. She noted their campus mask mandate has also resulted in fewer identified exposures when they do have a COVID-positive individual.

Noting the difference the delta variant has made, with 65 of the cases coming since July 1, Ellis said NPC has only had 234 since the very beginning of the pandemic.

"The delta variant is a 1 to 8 transmission ratio so to give you some kind of comparison, the flu is 1 to 1 and traditional COVID is 1 to 3," she said. "So that's people that you are exposed to that actually become positive after you were positive and exposed to them. So it is much higher positive case numbers versus what we had seen before. That's how, we had none and then in the first week we had six. And that wasn't what we experienced last year even. Even with the start of school, we did not have that number on the first week of school. This year, it's interesting because the case numbers have been higher; they're coming back down very similar in line with what is going on within the county. So we are, you know, having the same kind of experience going down, but not all the way."

One interesting aspect has been the much lower number of quarantines the school is having this year compared to last, she said, noting this is simply due to the fact vaccinated individuals do not have to be quarantined.

"This year's response was unique because we had limitations on what we could do on campus," she said. "So we couldn't mandate masks at the beginning of school. We also had -- this new surge came on after we had already planned and had full enrollment and capacity in all of our classrooms, so last year they were set up as socially distanced as possible and labs were staggered times, and this year was a little bit unique in us having to respond on a class-by-class basis. So several instructors decided that they could do virtual classes, so we did that on a case-by-case basis, which is, you know, very unique and the flexibility of our instructors was amazing in that."

The NPC team will be reviewing the COVID-19 situation on Friday, looking at many different aspects, including vaccination rates among students, faculty and staff, to determine if there will be any changes in policies and procedures.

"We are going to review where we are, where the county is, what we need to do moving forward, our vaccination rates," she said. "And we're tackling it from many different ways -- incentivizing vaccinations, also we do have a mask mandate on campus now. ... And we've done as much as we can where we can and that's, I think, the most important thing -- is that where we can intervene, we're trying to do as much as we can in those areas."

The college is quickly approaching its vaccination goal of 75%, which indicates herd immunity, among faculty and staff. Ellis noted that although she does not have the actual numbers yet of everyone vaccinated, they are planning a celebration among the faculty and staff when they reach that goal.

"So we have several things tied to that, that we can reduce some mitigation efforts that are, you know, maybe not the most fun -- wearing masks and not having in-person meetings and things like that, that we have to access that when we get to that level, that 75%," she said.

Ellis said the increase in vaccinations among students that they know of has been significant. Like some other schools, NPC has an incentive program in which students receive $100 for showing their proof of vaccination.

"Having our information, being able to pull that regularly is much more comforting to me," she said. "I know that that information is accurate; it's real-time; it's ours. And so we are much higher than that I can say. I'm still putting in vaccination information on a daily basis. I get hundreds every day. I had to create a separate folder in my inbox for that so they don't get lost in my inbox. So we are doing really well, we're getting a lot of them every single day and I'm hoping that those continue to come in. And we've gotten a lot of people that have gotten their first shot within the last few weeks, so I'm anticipating that those numbers are going to grow too. I think it's just going to get better and better honestly, I have a very positive outlook for it."

One thing Ellis says she is most proud of in overseeing the pandemic mitigation effort is seeing both the student and staff communities working together to keep everyone safe. She notes that going all the way back to last year when students returned to campus that it's been a "campuswide" effort. 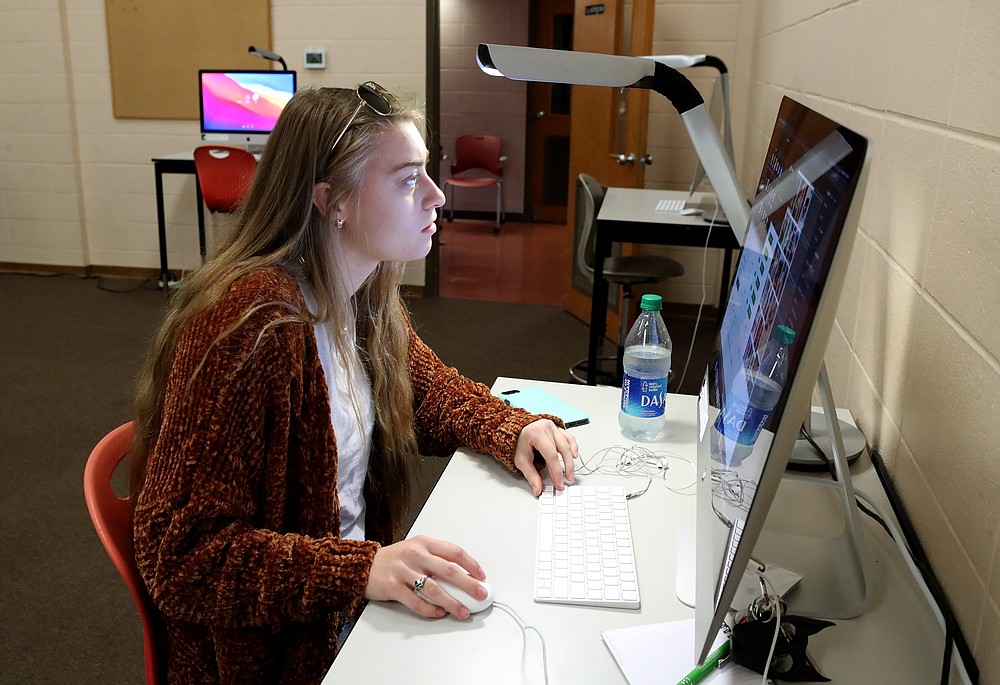 Student Rylee Woodard works on a project for her Introduction to Graphic Design class at National Park College on Wednesday. - Photo by Richard Rasmussen of The Sentinel-Record