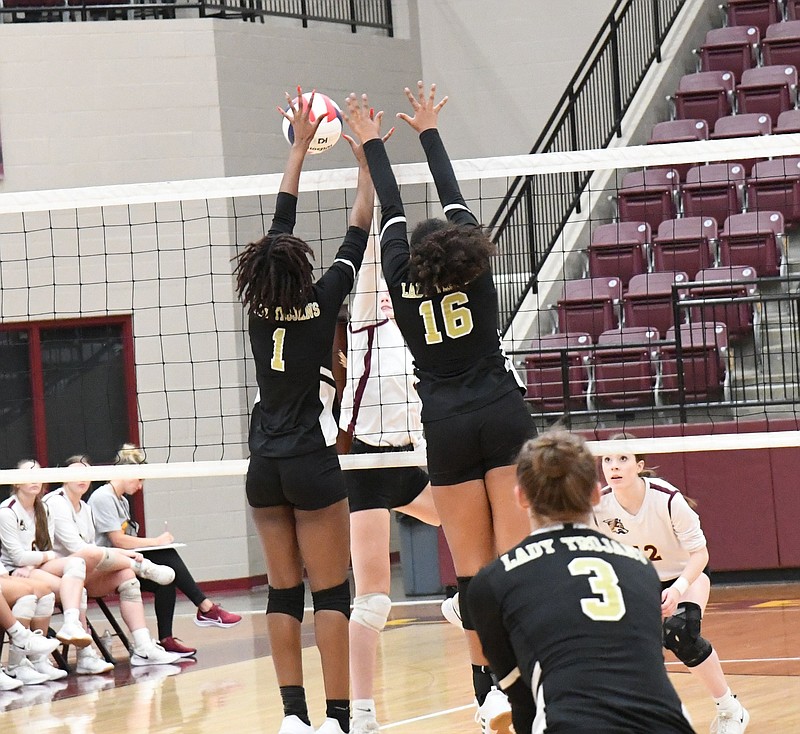 PEARCY -- Despite a hard fought match by Hot Springs, Lake Hamilton earned its first conference win of the season in a 3-0 victory over the Trojans at Wolf Arena Tuesday night.

Lake Hamilton head coach Karen Smith said she thought her team played hard when it needed to and emphasized a conference win is important no matter if it's early or late in the season.

"It's always good to get a conference win, no matter what part of the season you're in," she said. "Hopefully we keep learning and growing every time we hit the court. We're very young. I have some seniors on the team, but the majority of the girls that are playing are sophomores and juniors, so we're still learning as we go. I don't by any means want them to be ready right now. Our goal is to be ready when it's time to be ready."

On the other side, Hot Springs head coach Deana Franklin said she was pretty pleased with her team's performance.

"I think for the most part we owned the net," she said. "We did a good job blocking. Did a good job digging after the block. A few mental let downs I think was the difference in the game."

Hot Springs ran a brand new lineup and formation against the Wolves Tuesday night. A total of four different positions had new personnel in them against Lake Hamilton.

Franklin ran a 6-2 and put Marlissa Archie opposite of setter Bianca Thomas to free up Thomas to hit with more frequency.

Although the lineup changes didn't lead to a win against the Wolves, the changes are definitely something to build on throughout the rest of the season.

"We'd dig ourselves a hole and kind of had a hard time getting back up out of it a few times," Franklin said. "Volleyball is a game of momentum, and you've got to be on those high sides of the momentum more often than you're on that low side. I think we just had a few too many long lows to get over the top."

The Lady Wolves jumped out to an early 8-2 lead in the first set and forced the Trojans into a timeout after an ace by Naomi Smith. After the timeout, Lake Hamilton went on another run as the Lady Wolves increased their lead to 13-3.

Hot Springs clawed back on a 6-point run to cut the deficit to 17-12. The visitors even pulled within 3 points after a tip found its way to the floor for a 20-17 scoreline. However, the Wolves finished out the set strong for a 25-18 win.

The overall momentum of the match really swung in Lake Hamilton's favor after a back and forth second set.

Hot Springs set the tone and jumped out to a 6-3 lead on a block by Meyah Long after a long rally.

However, the Wolves bounced back and with a run of their own earned a 12-8 lead to set up an exciting finish to the set. Trading leads back and forth, Lake Hamilton took a 27-26 lead after a Trojan player went under the net.

Mishandling the ball and not being able to send over a return, the Wolves won the second set 28-26 and gained all sorts of momentum after a down to the wire finish.

Riding the momentum gained in the second set, Lake Hamilton looked comfortable throughout the third. Back-to-back-to-back aces by Emalee Worden gave the Wolves a 22-15 advantage and forced Franklin into a timeout.

Lake Hamilton finished the set strong and closed out the game 25-18.

Although a lot of the momentum changed hands after the battle in the second set, Franklin emphasized the importance of every point throughout the entire match.

"When it's a conference game and it's a cross-town rival, every point is a big point," Franklin said. "You know we've mentally had a hard time even playing with Lake Hamilton, so I'm hoping that this bunch can be the bunch that rises above. We still have them at our place, so hopefully we can change things around there."