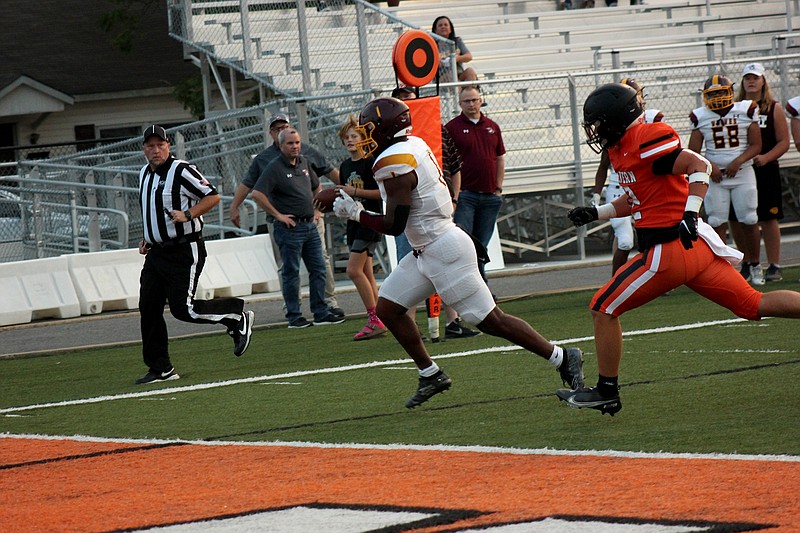 Lake Hamilton junior running back Kendrick Martin (1) runs into the end zone for a touchdown against Malvern last Friday. The Wolves host Hot Springs this week. - Photo by James Leigh of The Sentinel-Record

Both coming off solid wins, Hot Springs and Lake Hamilton have plenty to bring to the table Friday night as the Trojans travel to Pearcy to take on the Wolves.

"We didn't (expect that)," head coach Tommy Gilleran said. "You know, coach (J.D.) Plumlee does a good job, and so we knew they were gonna be ready. And we, we just, we executed well. You know, the big thing that probably that that they struggle with -- they've got a lot of young kids playing. They played a lot of sophomores, and so when you play sophomores, and we've got kids that are seniors, it's just, it's just, it's just different."

The Trojans (2-1) shut out Mena 34-0 last week after suffering a tough loss to Arkadelphia the week before.

"The kids played good, especially, you know, after that Arkadelphia game, which was frustrating," said head coach Darrell Burnett. "Our energy and our focus was totally different. Kids responded well. When they came in passing for 300, 300 yards a game, and we held them to under -- what, I guess it was 70 yards. And I was proud of the kids, and then our offense, we had over 500 yards. We still left two of them out there. Those deep balls we've got to finish. So it was good for our kids to respond because we know. Our kids before never encountered adversity good. Sometimes you lay down the tank. Sometimes some guys quit, so for our guys to bounce back, it was good."

Burnett said that while the Wolves may have changed some things, Gilleran has run the same basic offense for years, so he knows what to expect on Friday night.

"It's nothing different," he said with a laugh. "Coach Gilleran's been doing it since he was at Fountain Lake. I was at Malvern against them. They're gonna do what they do. They're big; they're strong. They gonna make you play physical at the point of attack. They're going to test your eyes. They're gonna test your manhood, so, man, our biggest thing for our kids is 'Just relax,' man. Relax. Make the main thing the main thing, and it's the football game. It's not all the extra stuff. It's not the Xs and Os, none of that, man. Eye discipline, hand placement, doing your assignment, playing for your teammate, playing for your brother and not being about yourself. So that's really what it boils down to."

With a team that focuses so much on defense like the Trojans, Gilleran said that his biggest concern is the speed that Hot Springs brings to the gridiron.

"The big thing I see out of coach Burnett's team is they're real fast," he said. "I mean, they're fast everywhere. And so, you know, the only way they really conquer speed is to kind of go at them, because if you go sideways, they're definitely going to tackle you because they're, they're so fast. And so we've got to combat that and stay on our blocks and do things like that. We've got to do some stuff, misdirection and stuff to keep them from using their speed so well. And so I know, I know, he puts a lot of his best kids on defense, and you can see that because they're so fast and so physical. And so we've got to combat it with that, and so that's kind of his trademark there."

Another aspect to the game is the fact that the athletes from both teams know each other and have played against each other for years, leading them to create another in-county rivalry.

"They know a lot of those Hot Springs kids, so it's not like anything new," Gilleran said. "So they've already been talking and, you know, whatever they do as kids. And so they know each other, and they know what to expect. And it is a big deal to them. You know, it's in town, and everybody knows each other, and it's another year. And so it's a huge game for us. I mean, it's always a good game for us before we go into conference because we know we can see a lot of speed and a chance to tackle fast people. And we can't, you know, we don't get to do that over here in practice. So we've got to be able to tackle fast people in the game. And so it's always a good test for us and our kids like it. It's good for this town, and it's good for both communities."

Health-wise, both teams are back to full strength. The Trojans lost a couple players earlier this season, including starting running back Pierce Smalley, but all of Burnett's players are back and ready for this week.

The Wolves lost Owen Miller last week against Malvern when he hyperextended his knee, but Gilleran said that he will be back.

"He meant to say Owen is a 600- or 500-pound squatter," Burnett interjected with a laugh. "He's alright. I told the coaches, 'Man, that kid is strong as an ox. Man, he's playing. Don't even think about even thinking about him not playing.' He gave you the coach's answer."