Wolves breeze past Trojans in shutout 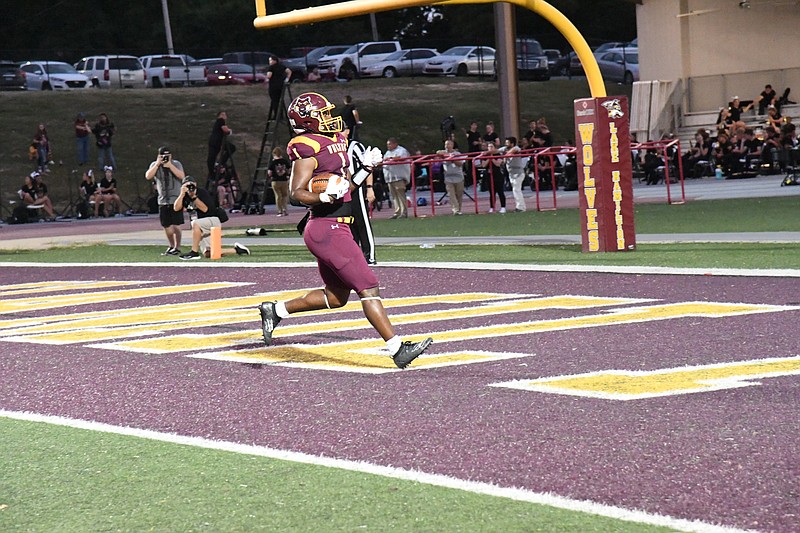 Lake Hamilton's Kendrick Martin (1) scores a touchdown during Friday's game against Hot Springs. - Photo by Tanner Newton of The Sentinel-Record

PEARCY -- Lake Hamilton breezed to a 41-0 shutout victory over Hot Springs Friday night at Wolf Stadium, putting up all 41 points in the first half.

Lake Hamilton (3-0) wasted no time setting the tone from the start as to how the rest of the game would play out as junior Justin Crutchmer returned the opening kickoff 80 yards for the Wolves' first score following Alex Hurtz's good kick. The senior would go a perfect 5 for 5 in extra points and 2 for 2 in field goals in the win.

Lake Hamilton's Caleb Waller picked off the first of his two interception on the night on the first series of downs for the Trojans (1-2). Waller's pick-six on third-and-10 from 20 yards out made the score 14-0 at not even a minute in.

Hot Springs first looked to junior running back Akeem Dorsey, who made back-to-back short gains, before a no-gain off the pass from senior quarterback Isaac Shelor to Blake McClelland forced the quick punt.

Starting from the Trojan 46 yard line after a Lake Hamilton penalty forced the Wolves back 10 yards, Crutchmer shot in and out of Trojan defenders as he followed his blocks for several large gains to set up a 28-yard field goal from Hurtz who split the uprights at the 4:35 mark of the first for a 17-point advantage.

Waller's second pick came on the Trojans' next drive when on their second snap, he snagged the pass at the Trojan 26 yard line to set up the next score of the night. After two short gains from senior running backs Tevin Hughes and Noah Tiernan, Crutchmer led the Wolves down to the 10 before junior Kendrick Martin went in standing up with 1:45 remaining.

Leading 24-0 heading into the second quarter, the Lake Hamilton momentum stayed strong as the Wolf defense continuously held the Trojan offense. Crutchmer came through big once again shortly into the quarter when he broke free on the second play after taking possession off the Trojans punt to go 65 yards for the touchdown and a 31-0 lead with 31 seconds ticked off the clock.

The Trojans could not catch a break as tight pass coverage by the Wolves led to several just-missed long pass plays. Lake Hamilton got its chance for another 3 from Hurtz when the Wolves' junior tight end Dalton Pitts scooped up the Hot Springs' fumble for possession at their own 18 yard line. After some powerful runs from Hughes, Hurtz made it 34-0 with 9:42 remaining.

After holding the Trojans at their own 24 and forcing the punt, the Wolves put it away when senior quarterback Grant Bearden hit sophomore Easton Hurley for a 20-yard gain. Bearden next went to Gavin Robinson from 29 yards out for the touchdown with 5:40 remaining in the opening half to set the final.

The second half featured a steady mix of tight defense from both sides along playing time seen from the second and third strings as neither team scored the rest of the night.

Bearden was 3-for-6 passing for 56 yards with Robbins (29), Hurley (18) and Izic Clenney (9) was a reception. Crutchmer led the ground game for the Wolves with six carries for 99 yards, Hughes had 10 for 47 yards, and Martin had six for 17. Clenney led the Wolves defense with four solo and one assisted tackle

Shelor was 7-for-16 passing for 18 yards and two interceptions. Perry Jones had nine rushes for 36 yards, and Shelor had five for four yards.

The Wolves will travel to Mountain Home next week while the Trojans have next week off before hosting Hope on Oct. 1.