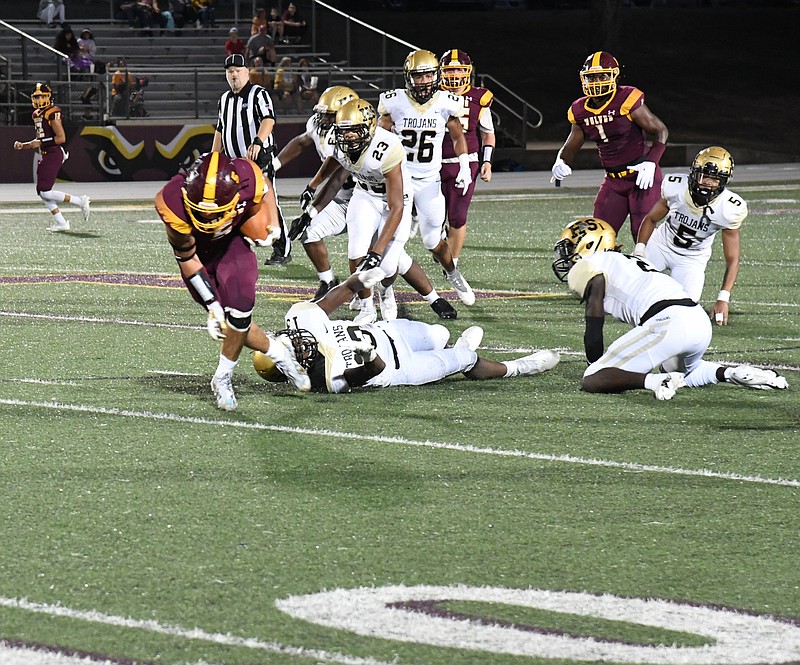 PEARCY -- A triple-threat performance on offense, defense and special teams led Lake Hamilton to a 41-0 shutout victory over Hot Springs Friday night at Wolf Stadium as both teams get ready to enter conference play.

Lake Hamilton (3-0) put up all 41 of its points over Hot Springs (1-2) in the first half before allowing the second- and third-strings playing time in the second.

"Well, you know what, I thought all three phases we did a great job tonight," said Wolves head coach Tommy Gilleran. "You know, I thought kicking game, of course, coming off of a kickoff return right off the bat, and then defense with the interception return for a touchdown, and then just rolled from there. And I thought our kids, overall, played great all night long, and so that was good to come off that going into conference play."

The Wolves' relentless push started on the opening play of the game when junior Justin Crutchmer returned the opening kickoff 80 yards for the touchdown for a 7-0 lead following Alex Hurtz's kick. The senior went a perfect 5 for 5 in extra points Friday night and 2 for 2 in field goals in the win.

The Wolves' momentum did not slow down as Caleb Waller next picked off the first of his two interception on the night on the Trojans' first series of downs for a pick-six from 30 yards out to up the count 14-0 with less than a minute off the clock.

Hot Springs looked to junior running back Akeem Dorsey to get its offense going, who made back-to-back short gains, before a no-gain off the pass from senior quarterback Isaac Shelor to Blake McClelland forced a quick punt.

"Our defense, each week, seems like they're getting better and better, and we need that to win a state title," said Gilleran. "Your defense has got to make stops when they need to, and then, you know, offensively we've got to make the plays we need to for us to be successful there too."

Starting from the Trojan 46 yard line after a Lake Hamilton penalty forced the Wolves back 10 yards, Crutchmer shot in and out of Trojan defenders as he followed his blocks for several large gains to set up a 28-yard field goal from Hurtz who split the uprights at the 4:35 mark of the first for a 17-point advantage.

Waller's second pick came on the Trojans' next drive when on their second snap, he snagged the pass at the Trojan 26 yard line to set up the next score of the night. After two short gains from senior running backs Tevin Hughes and Noah Tiernan, Crutchmer led the Wolves down to the 10 before junior Kendrick Martin went in standing up with 1:45 remaining.

"We can't give up, what -- I think it was 17 points on defense and lose 41-0," said Hot Springs head coach Darrell Burnett. "Man, that's terrible, you know. I mean, offense we didn't do worth a crap. Special teams we came out the first kickoff. A few guys jogging, and then they pop one. But other than that, man, we've got to find us 11 guys that want to play and make plays on offense. But not only that, but be physical and have a championship mindset. You know, 41-0, that's embarrassing. It is what it is. You know, they're a good team, you know, but I don't care what the score is, I still think our guys are good, too, you know. That's why it's frustrating. If we suck, yeah, you deserve to get whooped like that, but we've got too good of a kids. We've got some kids that have been working. We've got a lot of seniors on offense, and that's the disappointing thing -- we've got to step up and make plays, and we've got to get the job done."

Leading 24-0 heading into the second quarter, the Lake Hamilton momentum stayed strong as the Wolf defense continuously held the Trojan offense. Crutchmer came through big once again shortly into the quarter when he broke free on the second play after taking possession off the Trojans punt to go 65 yards for the touchdown and a 31-0 lead with 31 seconds off the clock.

The Trojans could not catch a break as tight pass coverage by the Wolves led to several just-missed long pass plays. Lake Hamilton got its chance for another field goal from Hurtz when the Wolves' junior tight end Dalton Pitts scooped up the Hot Springs' fumble for possession at their own 18 yard line. After some powerful runs from Hughes, Hurtz made it 34-0 with 9:42 remaining.

"Our defense, I thought they played -- they competed. Finished to the end, didn't give up," Burnett said. "And for them to be a high-powered offense -- they can score 50 to 60 anytime they want to, and for us I think it was 17 to 20 on defense. We've got to fix the other areas man, and that's unacceptable.

"But we get a bye week. We get to go into conference. We done had three games, four games of evaluation to see where we're at, where we need to be, what guys need to be in what position. It ain't that the guys can't do it; we've just got to put them in position that they're good at. If a guy can't block, well, maybe we don't need to have him block. Maybe we just need to have him out here catching balls. So man, it's frustrating, but I didn't come here for no handouts. We'll get it fixed."

After holding the Trojans at their own 24 and forcing the punt, the Wolves put it away when senior quarterback Grant Bearden hit sophomore Easton Hurley for a 20-yard gain. Bearden next went to Gavin Robinson from 29 yards out for the touchdown with 5:40 remaining in the opening half to set the final.

Gilleran noted the key to continuing their great season is keeping everyone healthy and strong.

"Having kids -- if we have anybody dinged up -- just get them undinged up, you know," he said. "Try to get them healthy and then get our minds ready for a long drive. You know, we have a four and a half hour drive to Mountain Home. Get them mentally prepared to take that drive but also to play a game when we get there."

Bearden was 3-for-6 passing for 56 yards with Robbins (29), Hurley (18) and Izic Clenney (9) each getting a reception. Crutchmer led the ground game for the Wolves with six carries for 99 yards, Hughes had 10 for 47 yards, and Martin had six for 17. Clenney led the Wolves defense with four solo and one assisted tackle

Shelor was 7-for-16 passing for 18 yards and two interceptions. Perry Jones had nine rushes for 36 yards, and Shelor had five for four yards.

The Wolves will travel to Mountain Home next week while the Trojans have next week off before hosting Hope on Oct. 1.