The People and Programs Helping Us Get Ahead 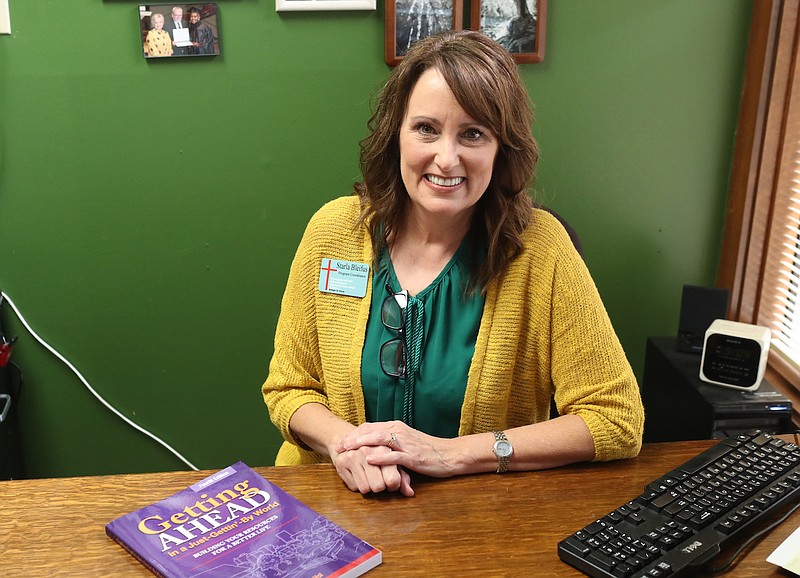 Reducing recidivism was the goal voters had in mind when they approved construction of the new Garland County Detention Center, something Garland County sheriff's Capt. Belinda Cosgrove is very cognizant of when discussing her role as operations director at the facility.

Cosgrove joined the department on Oct. 1, 1996, and was promoted to captain on Jan. 8, 2017. She was there the day the Juvenile Detention Center opened and when the new detention center opened she was put in charge of inmate programs.

"When we opened the new facility, we wanted to reduce the recidivism," the tendency of a convicted criminal to reoffend, "that's what the taxpayers wanted when they funded this facility, so I came over here to help do the programs," Cosgrove said.

The juvenile justice system is "all about rehabilitation and programming," she said.

Cosgrove attributes the success of the adult detention center programs to the inmates, the staff, the volunteers, the housing deputies, and the support of Chief Deputy of Corrections Steven Elrod and Sheriff Mike McCormick.

"We come from a very giving community here," Cosgrove said.

"I don't think there is a day or two that goes by that I don't have a volunteer calling or emailing."

"I am one person and it takes all of us working as a team to make a difference. People working in the housing units are very important. You don't have to be in programs to push and advocate for programs," she said.

"Those housing deputies are in there with 72 inmates. They certainly want them to go out and be successful, so they encourage them to participate in programs."

One particular success story is Carrie Montgomery, whose life changed when she went through a program called Getting Ahead While Getting Out.

"I was an addict for 15 years," Montgomery said. "I was at my rock bottom. I had ruined every relationship I had. I was an IV heroin and meth user. If you knew me, I either borrowed money from you or stole from you. I had multiple criminal charges. There was no manipulating my way out."

Montgomery says after spending a week in prison sleeping, someone she knew invited her to participate in a program. At first, she couldn't believe the prison was offering classes to help her. She questioned her friend, "They have classes in here? Are you for real about this?"

"I started getting up and I started going. There was Bible study, there was Celebrate Recovery, there was a chaplain. They would come and they would pray, but most importantly there was this class called Getting Ahead While Getting Out. You had to apply to get in. I did that and I was accepted."

Montgomery says she started learning about poverty. "I came from a good family, a Christian family. They didn't understand what happened to me." She said when they started talking about poverty, she thought, "'I'm not in poverty. My family's middle-class.' When you think of poverty, you think of homeless people on the street. There are so many other types of poverty other than just financial poverty."

Montgomery said she ultimately found her passion in helping other addicts. In 2017, after she was released, she was invited back into the detention center by Cosgrove and one of her mentors, Bonnie Johnston, as a volunteer to lead Celebrate Recovery.

Not long after, she got a job and eventually achieved a supervisor position, but that was not the end of the story. She went on to receive a scholarship and attended the National Bridges Out of Poverty Conference where she shared her personal story and got to meet the authors and creators of the Getting Ahead program, Ruby Payne and Phil DeVol.

"Phil heard about me telling my story and offered to pay for me to become a Getting Ahead facilitator," Montgomery said, "and one month after we returned home from the conference I became a facilitator."

Montgomery now holds many titles and collaborates with several organizations that work in the community to help others get ahead. She is on the board of directors for Cooperative Christian Ministries and Clinic, the director of The Hope Movement, on the executive committee of the Unity Coalition of Garland County, and a member of the opioid committee at the sheriff's office.

These are the types of success stories Cosgrove says she loves to see. "You go out into the community and they come up to you and you see them doing well and they're working. ... It doesn't matter where they are working ... they are so happy they are being productive ... I mean, that's the most rewarding thing for me, in my heart. It makes my heart happy, to see them doing well, because I say we've done our part."

The hardest part for any inmate "is (when) we turn them back to the community and so the Getting Ahead program, they have a plan set up. It makes a big difference that they have an advocate in the community."

"Either we keep them busy or they keep us busy," she said. "A lot of these inmates have never completed anything. They've never had a goal that they finished. And a lot of them, especially, have never been recognized for anything good. They've always been on the front page or in the paper for doing something bad, but now they are doing something good and they see that you can get rewarded and it does change people's life. Some of them don't know that there is a different way, they are just a product of their environment and so our goal, not me but everyone here, is to be that change."

While Cosgrove is not directly associated with the Getting Ahead While Getting Out program provided by CCMC, it was that program that helped open the door to many positive successes.

The program's coordinator, Starla Bleifus, who came to her position after retiring from a career in education in June 2017, said she knew she wanted to do something else.

"I didn't know what, but I knew I wanted to keep working." After only being retired for three days, she found out CCMC had an open position closing the next day. "I felt like it was a God thing for sure," Bleifus said.

"A lot of my job is administrative, getting the participants who are going to be in the class, connecting them ... our facilitators, our volunteers ... so finding people who want to participate, making sure they get trained ... and just coordinating the scheduling, the financial parts. That's really administratively what my job is," Bleifus said.

Bleifus oversees classes for those inside jail "needing help with skills for when they get out," and outside classes for "those who are struggling with poverty and need to find a way to move forward in life," she said.

For those on the outside, Bleifus interviews the prospective candidates to see if they meet certain stability requirements, including housing and transportation requirements. Once they qualify for the program, she places them in a class.

Cosgrove finds the candidates she thinks would be a good fit for the jail class, Bleifus said, noting, "being able to complete the class is important. So, Captain Cosgrove gives us a list of names. We interview them with questions and talk to them. We check how long they are going to be in the detention center. They need to be there long enough to complete the class."

The program has graduated 65 classes since 2015, with three more finishing in September. "A little over half of those classes took place in Garland County Detention Center," Bleifus said.

"The goal of Getting Ahead is to take a hard look at what poverty really is, so they can assess where they really are. A lot of times they do not realize they are in poverty, because it's just what they have always known, and they know people worse off than them."

"Participants study poverty; what causes it, what changes it. They learn about 11 resource areas that may need to be built up in order to be successful. Self-assessments are done and goals are written," Bleifus said.

"One of the most important features for those participating in the detention center is the 72-hour stability plan for the critical first days upon release."

The most recent data from the detention center in 2019 showed the recidivism rate was 48%, but those who completed Getting Ahead had a much lower recidivism rate of 22%.

"Those are findings that make a difference in our community," Bleifus said.

Another success story of the program is Courtney Davis, who graduated in 2019.

Davis and her friend, Kristen Nesbit, started Virtuous Maid Services LLC in 2020. Nesbit also graduated from Getting Ahead in 2019, offered at New Life Church.

"The most important thing I took away from the class was the realization that I really was living in poverty and I learned to set small and large goals in order to progress to where I wanted to go," Nesbit said. "Goals are good to set, because that's your endpoint, but knowing where you are starting from makes achieving goals possible."

Bleifus said she is very proud of all of the graduates and noted the biggest struggle recently has been dealing with the effects of the pandemic on the programs which "slowed everything down in 2020 and 2021."

One of the hardest challenges right now is keeping "the inmates occupied during this pandemic," Cosgrove said. "All the programs we've had to put on hold, and so we still want to give the inmates resources during this pandemic and that's been a little difficult. We were actually gearing to start back up. I think it was the first of May this year, then the delta variant hit, and so we had to slow everything back down."

Cosgrove said they are looking forward to when COVID restrictions are lifted. "Our goal is to pick back up where we left. We know it's going to come back and we are going to be prepared and ready. The day we can say we can safely reopen programs, we will be doing that," she said. "The inmates are ready to start back up. We just had someone get their GED this week here."

Anyone interested in volunteering or learning more about the Getting Ahead program can contact Bleifus at [email protected] or call 501-318-1153, ext. 303.

Print Headline: The People and Programs Helping Us Get Ahead