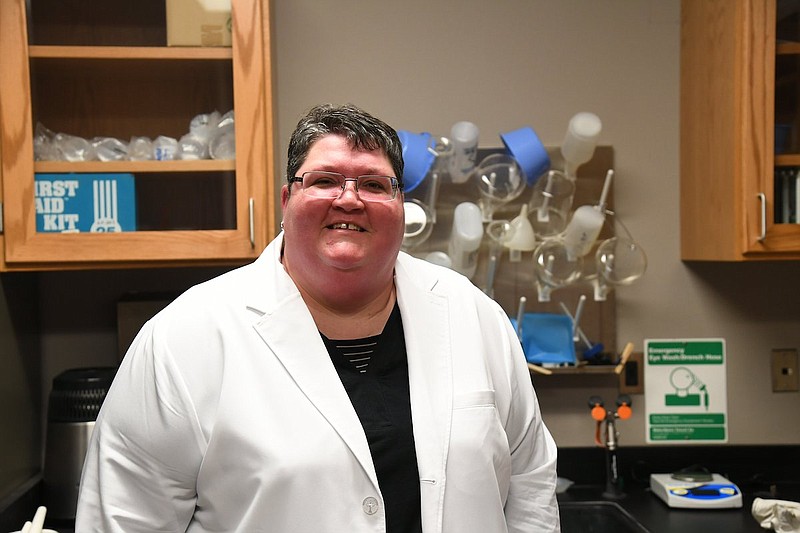 Rebekah Robinette, professor at NPC, stands in her prep room. - Photo by Tanner Newton of The Sentinel-Record

It's often considered a rare thing when a person is present enough to recognize when opportunities present themselves throughout daily life.

While that awareness, no doubt, plays a key role in finding one's true calling and ultimate success, other times it's destiny itself that takes over and leads a person to bigger and better things. For Dr. Rebekah Robinette, it's been a mixture of the two, along with some special acts of kindness from those she came in contact with along the way, that led her to where she is now.

Robinette, now in her eighth year of teaching at National Park College as a member of the microbiology faculty, was once an NPC student herself before years later attaining her doctorate at the University of Florida College of Medicine where she performed groundbreaking research in microbiology and immunology while authoring and co-authoring several publications in peer-reviewed scientific journals.

Growing up as a shy, young home-schooled girl in Benton, no one, including herself, ever realized the degree of potential that was hidden deep inside of her.

"I had never been in a public school until I somehow figured out -- and I don't remember how -- how to start the college (application) process," she said. "The only reason I knew this college was here was myself and the pastor's daughter were allowed to leave town and come to Hot Springs."

Though Robinette and her friend had initially planned on going to Magic Springs for a fun day at the park, they instead decided on Mid-America Science Museum, located right next to NPC, after learning that the park was closed for the day.

"We were going to the science museum and I was like, 'That looks like a nice college,'" she said. "Maybe, you know, in the back of my mind, I might one day possibly. ... It was sheer luck that the science museum was even there. Magic Springs was closed and, I mean, talk about just some twist of fate. But that's how I knew the school was here, literally."

Robinette kept that thought in mind and some year's later began classes at what was then known as Garland County Community College. Asked if she knew back then if she wanted to be a teacher, she said, "absolutely not."

"The background I was brought up with my family was pretty oppressive and strict, and in a religious-strict way," she said. "That's why I wasn't allowed in public school. I kind of taught myself growing up. My siblings ... two of the other four don't have even a high school education. So -- no idea what I wanted to do but I just knew that I didn't want to be an assistant manager at Burger King for any longer."

Prior to making the Spa City and NPC her home for a few years, Robinette came across the local adult education center in Benton -- a moment that would ultimately set her professional life in motion.

"It was off the interstate at that time and I just went in there one day and asked them, you know, 'Can you help me figure out where I stand?'" she said. "Because the home-school wasn't really regulated on things. And there was, I don't even know what her name was, but a nice lady was like, 'Well let's just see where you're at with math and English. And I went there and worked on that and I believe that's how I found out that an ACT would be a good thing to take, depending on where you wanted to go."

After taking the ACT test, Robinette found that her scientific/analytical scores were "off the charts," as she sheepishly noted.

"I was like, 'Well I probably should do something scientific,'" she said.

That she did, going on to study medical laboratory technology at NPC before moving on to High Point University in North Carolina on a Phi Theta Kappa scholarship in the fall of 1999. Her decision to choose High Point, located near Winston-Salem and Greensboro, came out of the blue she would note. With her involvement in the honor society, Robinette got to attend numerous conventions across the nation. At one particular convention in California, which offered her her very first plane ride, another door would open for her. She recounts walking through the college fair at the convention center.

"I was just walking around through all the (booths), getting the free pens and cups and talking to people, and ran across High Point University," she said. "It's a private institution and has really grown tremendously since I left. And I was like, 'Well, that's way off.' You know, something I couldn't do, barely ever having left the state of Arkansas. And I kept the literature, and my mentor (Dr. Ann Bragg) that I replaced here at the campus said, 'You need to apply.' And I said, 'Well, I can't just go to North Carolina. I've got to see this place.' And my other mentor that was the adviser for the honors society handed me a $100 bill and said apply."

Robinette humbly took that $100 application fee and got into the vehicle with Bragg to drive the nearly 900-mile trip to the High Point campus. After arriving and meeting with financial aid, however, she realized that she was $800 short in tuition money.

Robinette said that nice financial aid lady, who would later attend her graduation party, provided her with the $800.

Although she knew that she was on the right path and enjoyed the work she was doing, Robinette didn't feel as though she had yet found her true calling nor reached her full potential. After completing graduate school followed by the doctoral program at the University of Florida, she went on to perform three years of post-doctorate work.

"After that time, I realized that I didn't want to be the top professor of a lab at a research institution, just fighting for grants all day long," she said. "I wanted to actually be on the front lines with students, and I was always getting in trouble with my professor for being with the students instead of my other work. And so I realized what my actual calling was, and that the entire process had taught me so much that I could bring back home and share with students here."

Robinette said that, going all the way back to her days as an NPC student, the way she learned was by tutoring other students -- her full-time job while there. Figuring out as best as she could on her own and then trying to explain to her peers in the little study groups, she said, offered her the most practical way of teaching herself. Throughout her graduate and postgraduate career, everything didn't always go as smooth for her, however, as she would have to switch mentors at one time.

"They worked it out and let me switch faculty members and that mentor, her name was Dr. Jeannine Brady, and she still has her lab going," she said. "Again, she terrified me, like my first mentor did, because they knew there was something in me. So if they had to make me cry to get it out of me, they were going to do it. It was the best hard road, I guess, I ever took -- switching labs. But very rewarding, and I learned everything that I teach to the students."

Robinette recalled how her overall college experience and extracurricular activities that came with it was all so new to her.

"You know, I felt like I was an alien on a different planet going into these places," she said. "And self-confidence was a big deal -- I lacked it. And all the professors are like, 'Oh no, you got it.' So that helped and, like I said, once I got through with the terminal degree and was continuing the research project, I was like, 'My boss seems pretty miserable in there in that office all day reading literature, trying to get some government funds to keep us supplied and researching."

In addition to that knowledge attained, it was those invaluable life lessons that Robinette learned throughout her college process that paid off well for her. Now with a family of her own and students to whom she counts as family as well, she feels extremely blessed to have what she has.

"I am married to my amazing wife, Debbie, and love being a stepparent to her son and daughter," said Robinette. "I have three adorable grandchildren as well."

Along with that special family network, she says being able to establish those relationships with her students is "everything" to her.

"If I didn't have a relationship with my students, I would not work here," she said. "If I weren't allowed to have the freedom to work with student organizations like I do, if I didn't have the ability to give as much individual attention and buy-in to each student's individual life, this wouldn't be a fulfilling career for me. So I would go make money doing research if I was not going to have an impact on students' lives."

Asked if she ever catches a glimpse of her young, former self when seeing that potential in certain students, she said she does indeed.

"I do, and then I'm hard on them," she said with a laugh. "But a little bit nicer than, I guess -- I'm hard, but I explain why I'm being hard versus just being hard. So there's been a few instances where I had a little intervention. I'm like, 'You know, if you would just do the homework, it would save your grade because you know and you're interjecting in class -- you're just sinking your grades because you're just not doing that assignment.' And it worked out for that student."

Robinette's proudest moments as a teacher come when she watches a student walk across stage at graduation. She also considers it the utmost honor to chosen by the student body as "Most Knowledgeable" faculty member and "Most Innovative." Robinette truly found her niche here in Hot Springs at National Park College and considers it her home. When she is not camping or fishing with her family, there's no place she would rather be.

"You never know who you can impact," she said. "So do your best and don't give up on people when they walk in and you think they might not have what it takes from first impressions. Because I had a counselor -- he was very nice and supportive, don't get me wrong -- but told me later on, he was like, 'I didn't give you more than two days.' And you know, don't be afraid. You're not a failure if you don't just click with that class or that situation immediately. Not everybody's going to click with every instructor and sometimes instructors learn later that maybe they should have been a little different to the students."