HSDFF announces lineup of 35 films, from chefs to rescues 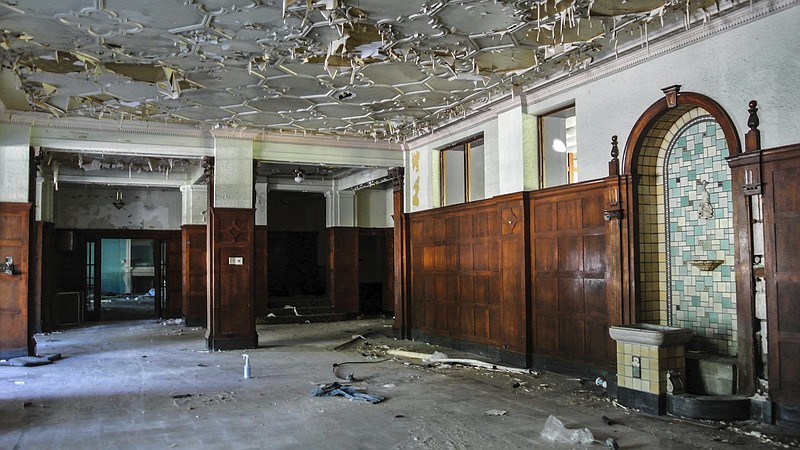 “Forever Majestic,” by filmmaker Michael Schwarz, which explores the story of the former Majestic Hotel that was destroyed by fire, will screen at this year’s Hot Springs Documentary Film Festival. - Submitted photo

Organizers of the Hot Springs Documentary Film Festival, returning for its 30th run next month, announced the lineup of films for this year on Wednesday, featuring chefs, tennis players, a daring rescue and several local sights.

Opening the festival will be "Citizen Ashe," by directors Sam Pollard and Rex Miller, about tennis legend Arthur Ashe. The movie "details the evolution of Ashe from groundbreaking tennis legend to striking public figure," a news release says.

There will be two centerpiece films, one international and one domestic. The international film, "The Rescue," is by the Academy Award-winning duo E. Chai Vasarhelyi and Jimmy Chin, who won the Oscar for "Free Solo." The film "viscerally chronicles the unprecedented undertaking to rescue a boys soccer team trapped in a flooded cave," the release said.

The other centerpiece film, "The Neutral Ground," from filmmaker CJ Hunt, "explores the social upheaval caused by the planned removal of Confederate statues in New Orleans."

Closing out the festival is "Julia," a movie from the makers of "RBG" that looks at chef Julia Child.

"It feels so great to get the lineup out. I'm so proud of every single film in the program," Jen Gerber, festival executive director, said, noting this year's lineup is "one of my personal favorites."

Gerber named six must-watch movies including the four already named, and two that focus on Hot Springs. She said the festival will have "some really incredible Arkansas stories," including "Forever Majestic," by director Michael Schwarz, and "Broken Wings," by director Jonathan Sutak.

"For a town like Hot Springs, Arkansas, The Majestic was more than just a hotel -- it held an important place in the collective memory of the citizenry. Despite multiple owners and frequent promises to renovate, the building would sit empty and eventually catch on fire in 2014. Complicated and deeply personal, 'Forever Majestic' considers the financial opportunity born of that fateful fire and questions who is best served by its demolition," according to the festival's website.

Gerber said that for "our Hot Springs community, it will really resonate."

"In Hot Springs, Arkansas there is a single-winged black vulture named Adonis. Well known to the community, Adonis's story is one that feels familiar to his caretaker, Jayne and her spiritual roommate, Ann. Director Jonathan Sutak explores the town's relationship to the bird and how his presence has impacted the lives of its citizens. Full of empathy, nuance, and kindness, 'Broken Wings' asks how we can all belong despite carrying experiences that make us appear less than perfect," the website says.

Gerber said Sutak attended the festival in the past, and on that occasion, he encountered Adonis. Sutak was "so captivated by her story," Gerber said, that he returned to Hot Springs to make a movie about her.

"We will have some, a handful of filmmakers in attendance," Gerber said, noting one attendee will be Dawn Hudson, CEO of the Academy of Motion Picture Arts and Sciences. Hudson is originally from Hot Springs, and they are "really, really excited" to have her in attendance, Gerber said.

This year was "the hardest year ever" to narrow down the lineup for the festival, she said.

Due to the festival returning, in part, to the Malco Theater, she said they were forced to have a smaller lineup than usual with 35 feature films scheduled. She noted they usually have between 50 and 55 films.

"We had to let go of a lot of films that we really love," Gerber said.

About half the movies will screen at the Malco, while half will screen in the Arlington Resort Hotel & Spa's Crystal Ballroom. The Arlington being a venue is a change of plans for the festival, as it was previously announced that half of the movies would be screened at Central Theatre.

Central Theatre is a classic movie theater currently being renovated by Chris Rix. Gerber said the venue change happened because "some of the things we need were not possible" while the restoration of the building is happening.

Gerber stressed that "we're (Rix's) biggest fan," and they hope to be able to work with the Central Theatre in the future.

She also noted that, with it being the festival's 30th anniversary, she felt it was appropriate for the two venues to be the Malco and The Arlington.

"We originated at the Malco," Gerber said, and they have spent the last few years at The Arlington so it feels good to be able to include both venues.

Due to the ongoing pandemic, Gerber said screenings will have reduced capacity and recommended that people purchase their tickets early, as she can see "a lot of events selling out."

The festival opens on Oct. 8 with "Citizen Ashe" playing at 7 p.m. at Horner Hall at the Hot Springs Convention Center, and will run until Oct. 16, when they show "Julie" at 7 p.m. at the Malco.