Rams to open conference against Cards 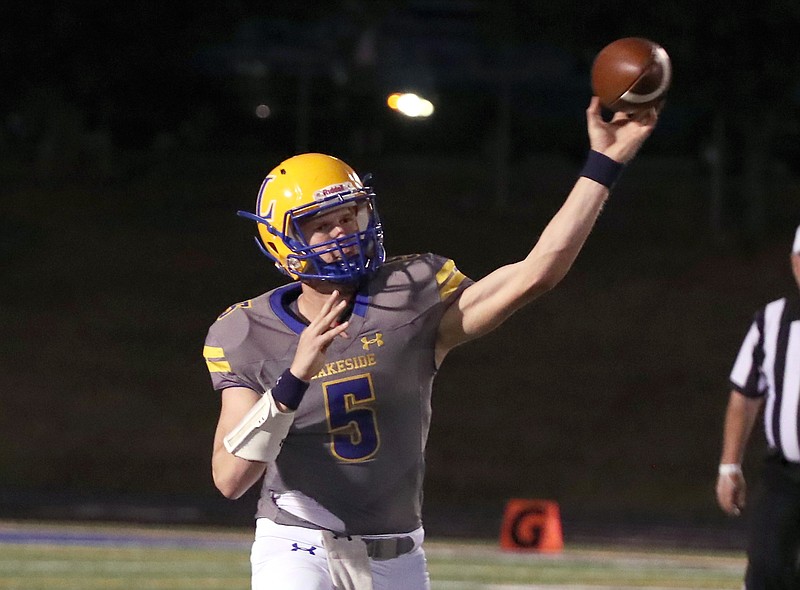 Lakeside's Jordan Mills (5) throws a pass against Malvern on Sept. 17. The Rams host the Camden Fairview Cardinals tonight. - Photo by Richard Rasmussen of The Sentinel-Record

Lakeside struggled in its first two games this season, but the Rams finally found their footing last week against Malvern following an unexpected bye week.

With several lightning delays before last week's game, the Rams (1-2) struggled to get their offense going in the first quarter, but things turned around early in the second.

"We were moving the ball early, and we got a turn over and we kind of stalled in the red zone inside the 10 two times before we can get it, get it in in the second quarter," Lakeside head coach Jared McBride said. "But I think we were moving the ball well, and defense gave us the ball back and kind of set us up well. We just kind of stalled a little bit going in at the beginning, but we got our feet underneath us and had a good plan, and the kids executed it really well, and we were able to be consistent in putting the ball in the end zone."

Like every team, the Rams use their non-conference schedule to figure out the best combination to put on the field each week, but McBride said that the unexpected bye week allowed the team to recuperate and practice.

"We lost one of our games versus Watson Chapel due to COVID, so that set us back a little bit, but it still gave us opportunity to practice and to get better," he said. "And for us, you know, we're searching for consistency and the people that will help us to get that, but I feel good about where we are going into conference playing against, you know, a really tough opponent for first week in Camden."

"I think that they're a really good football team that's coached really well," McBride said. "They remind me a lot of the ones that we played against when I first got here, and those guys that were kind of the team to beat in the conference, and they're a complete team. They have really good offensive-defensive linemen, which really help, you know, for you to be a good football team, but they're impressive on the lines, and they've got good skill, and the coaches do a good job of getting them in in the right spot to to produce."

The Cardinals (3-1) primarily run a Spread offense, but they also have a few run-based schemes they use to mix things up.

"They have a really good quarterback that can run and pass and is a very efficient passer," McBride said. "And then they'll line up in the Maryland I and just run it right at you, and they're very big and physical, two-tight (end) group that have shown the ability to be a power run team but also line up in empty and throw it all around the field. So, you know, we've got to be prepared for all of that, and be able to execute."

Camden Fairview's quarterback, junior Martavius Thomas, is an Arkansas commit in baseball, and he is not the only speedy athlete on the team.

"They've got two good running backs that both play linebacker for them on defense," McBride said. "That just shows you how tough and physical and kids they are. Their quarterback is as a kid that, I think, is going to Arkansas to play baseball. You know, he's just a junior, I think, this year. It just shows you what kind of athletic ability that he has. They spread the ball around all over the field; they've got speed at receiver, and defensively they rotate probably eight kids on the defensive line, and they're real -- they don't have a drop off. So you can't really concentrate on one aspect when they're pretty balanced team."

The Rams have their own set of athletes, including senior quarterback Jordan Mills and sophomore running back Braylen Russell.

"Jordan had a really good week last week and was able to find five different people to get in the end zone, had six touchdown passes, and, you know, has shown the ability to spread the ball around the field and make make good throws," McBride said. "Running right now with Braylen, he's done a good job of just kind of taking advantage of what we're getting. They're kind of stacking the box on us trying to stop him, and we're able to throw the football. So, you know, we've got to continue to do that, just kind of take what they give us and then execute. That's the main thing we've been preaching."

The Rams are mostly healthy with a pair of defenders expected to be out for this week's game, but McBride said, "It's high school football, and there's always something going on. So we've just got to get the next guy ready."