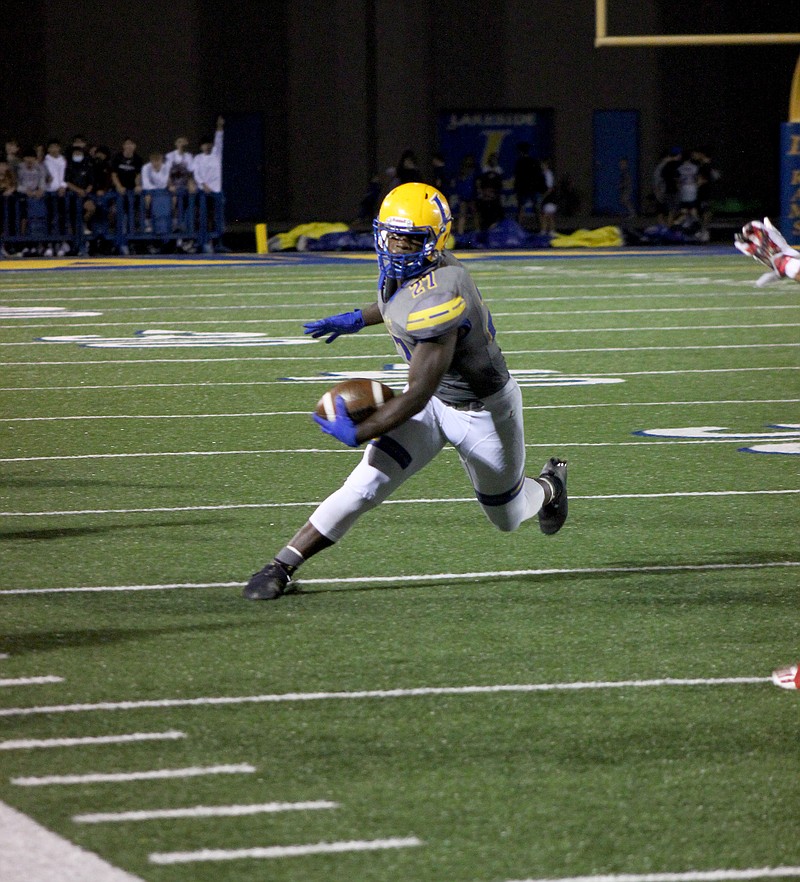 Lakeside&#x2019;s Braylen Russell (27) turns upfield after snagging a pass from quarterback Jordan Mills during Friday&#x2019;s game against Camden Fairview at Chick Austin Field. - Photo by James Leigh of The Sentinel-Record

Lakeside had to kick the ball away late in the first half, and Camden Fairview took advantage of the good field position to score a late touchdown as the Cardinals held on for a 38-33 win over the Rams at Chick Austin Field.

The Rams (1-3, 0-1 5A-South) held a 14-13 lead following a touchdown by the Cardinals with 2:41 left in the half, but Camden Fairview pushed the Rams back 11 yards to force a punt. The Cardinals took over at the Rams 47, and four plays later, quarterback Martavius Thomas found Aaron Alsobrook on an 11-yard pass with 31.9 seconds left to take a 19-14 lead into the break.

The Cardinals, recieving the kick to start the second half, used a seven-play, 58-yard drive to score again, this time on a 2-yard run by Jacoriae Brown to take a 25-14 lead with 8:48 to go.

The Rams, led by Braylen Russell, kept themselves in the game, Russell scoring on a single-yard run with 3:48 left in the third to pull within 25-20.

Thomas, who continuously found holes in the Lakeside secondary, launched a 45-yard bomb to the end zone for Brandon Copeland to stretch back out to a 32-20 lead with 8.7 seconds left after Nasir Khan's kick.

Russell powered his way back into the end zone on a 4-yard run to cut the spread back down to 5 points after Andrew DeGrasse's kick with 10:20 remaining. A 7-yard run by Brown with 7:59 left made it 38-27 after a failed conversion attempt.

Russell scored his fourth touchdown of the night with 6:32 remaining on a 5-yard run. The Rams' conversion pass was batted down to set the final as the Cardinals burned the last of the clock on an 11-play, 55-yard drive.

Lakeside started off strong, picking up first downs on its first two plays of the game before petering out at the Cardinals' 16. Camden Fairview also struggled early, driving just 31 yards on eight plays before having to punt it away.

The Rams made sure to show their intentions on the next drive as southpaw quarterback Jordan Mills found Chase Cross on a 93-yard touchdown pass, with 60 yards coming after the catch. DeGrasse's kick was no good for a 6-0 lead with 4:51 left in the opening quarter.

The Cardinals responded with Brown running it in from the 2 to cap an 11-play, 56-yard drive with just 4 seconds off the clock in the second frame. Khan's kick gave the Cardinals their first lead of the game.

Russell picked up his first score of the night on a single-yard run with 8:42 left, capping a 12-play, 74-yard drive. He also ran the ball in on the conversion attempt to give the Rams a lead they held for just over eight minutes.

Thomas found Copeland on a 20-yard touchdown pass with 2:41 left to pull within 14-13 after a failed conversion attempt.

The Cardinals outgained the Rams 504-385, but Lakeside won the penalty battle, taking only two calls for 20 yards. Camden Fairview was penalized nine times for 85 yards. The Cardinals won the possession battle with 31:19 to the Rams' 16:21.

Thomas was 16-for-22 on the night for 229 yards and three touchdowns. Copeland had three catches for 69 yards and two scores, Alsobrook had one score and 52 yards on six receptions, and Jarvis Reed led the team's receivers corps with seven catches for 108 yards.

Brown led the Cardinals' ground game with 26 touches for 131 yards and three touchdowns, and Thomas had 14 carries for 128 yards.

Mills was 17-for-28 for 278 yards and a TD, and Russell had 23 carries for 115 yards and four scores. Chase Cross had four receptions for 128 yards and a touchdown, and Kyler Wolf reeled in five passes for 66 yards.