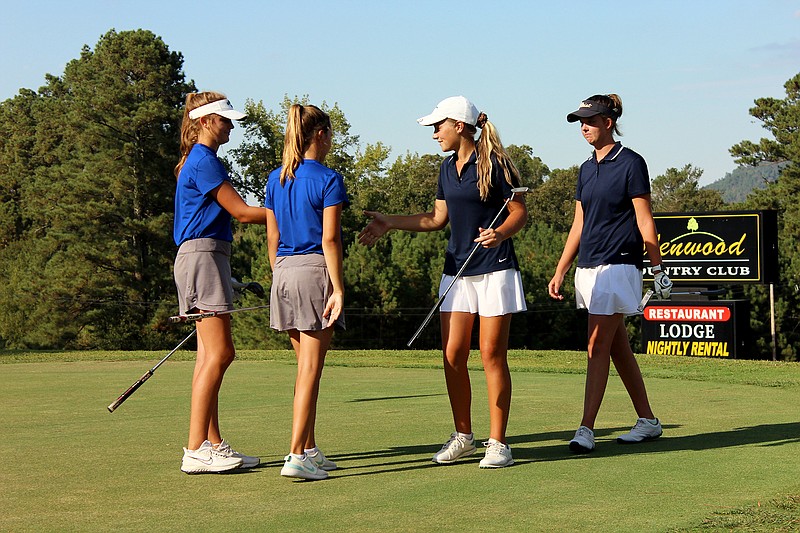 Mountain Home junior Reagan Webb, from left, and senior teammate Ella Brashears shake hands with Greenwood seniors Hallie Jones and Grace Woody after Jones and Woody won a two-hole playoff to give the Lady Bulldogs a second-place finish at the Class 5A Girls State Golf Tournament Monday at Glenwood Country Club. - Photo by James Leigh of The Sentinel-Record

GLENWOOD -- Before the start of the Class 5A Girls State Golf Tournament at Glenwood Country Club Monday, everyone except El Dorado knew they were gunning for second place.

The Lady Wildcats took home the trophy again for the second-straight year. Led by Aubrey Marx' 80, who shot an 82 last year at the team's home course of Mystic Creek Golf Club, Hope Walthall and Lani Hammock turned in cards of 88 each to earn the team's eighth state title by 17 strokes.

"Well, it was a great feeling to go back-to-back state champions with this group of kids," said El Dorado head coach Chris Ezell. "We had everybody back from last year's state champion team. And so we felt like there was a little bit added pressure having all those, you know, seniors back for one more run. So we kind of felt that all season long, but the girls stepped up and handled that pretty well, I would say."

It quickly became apparent as the scores began to come in that the second-place team was not going to be as obvious.

Mountain Home and Greenwood both had team scores of 273, leading to a playoff. The Lady Bombers were represented by junior Reagan Webb and senior Ella Brashears while seniors Hallie Jones and Grace Woody represented the Lady Bulldogs.

Starting on Hole 1, both duos bogeyed the hole, sending them to a second playoff hole on No. 18.

With all four players on the green, Webb was forced to two-putt after taking the safe shot to the fairway after her drive landed in the trees to the right for a double bogey.

"To be, you know, a young girl with a mob following you, you know, and having to make some of those putts and some of those shots was impressive," said Mountain Home head coach Dell Leonard about Webb. "You know, where we're at right now as a program is, you know, you've got to go through some of those struggles before you can get where you want to get, and as much as it hurts right now, I think you go through things like that as a program to eventually, you know, get where you want to get, and I hope that -- I believe, I know we're heading in the right direction."

Brashears was the only player whose initial drive landed in the fairway, but after Woody's third shot rolled through the back of the green, she had a solid chip to set up an easy putt for bogey. Webb and Jones also bogeyed the hole to give the Lady Bulldogs the runner-up trophy and a bit of revenge after the Lady Bombers defeated them last week in the 5A-West Conference Tournament.

"They beat us last week, and we knew we didn't play our best from one, two and three, but we wanted to -- our goal was to get second place because El Dorado girls are really solid," said Greenwood head coach Ronnie Sockey. "And we knew this course. But, you know, they were beatable today though with the 256, but we come down here and accomplished what what we talked about last week after our conference, was beating Mountain Home and beating Russellville again. So it was definitely a good match and fun to watch today, so they had to grind it out."

Leonard said that even though the Lady Bombers took a 15-stroke win last week, he was impressed with how the Lady Bulldogs played.

"We beat them by 15 strokes, so that was -- you know, they had a good day today, and that was good for them," he said. "I've got a lot of respect for Greenwood and coach Sockey and coach (Tyler) Woods and those girls. I mean, those two right there are seniors, and, you know, we want to do with our girls golf program, we want to do what Greenwood's done. You know, that's what that's where we want to get. So I've got a lot of respect. There's no shame losing to them, that's for sure."

Sheridan senior Emma Hester earned medalist honors for the second time in two weeks after beating out Marx in a playoff last week in the 5A-South Conference Tournament at Glenwood Country Club. Hester shot her second-straight 4-over 76 as well, despite double bogeying on No. 18 to finish the day.

"I was like good until the back nine, and I doubled the last hole," she said. "Yeah, it was -- I played good. I kind of slowed down a little bit."

Jonesboro sophomore Caroline Hughes, who was medalist last year after a playoff, earned runner-up medalist honors with a 7-over 79. This was only her second round on the course after playing 18 during Sunday's practice round.

"It was rough in spots," she said of her play. "The fairways are rocky in some, some spots. But, you know, if you get under the ball, it'll turn out good."

Lakeside finished sixth overall at the tournament with a team card of 299, but head coach Kirsten Heideman was pleased with how well her team performed.

"Well, we definitely left some shots out there, but my team is a pretty new team," she said. "And so we have girls who are brand new to the sport in general, not even just the team, and so I'm pretty happy with how they play today. I feel like, you know, everybody had a tough day, but overall, I'm pretty happy with the scores that we posted. El Dorado just played really, really well today."

Last week, the Lady Rams finished second, a feat that Heideman said was likely aided by the rain delay that allowed the team to refocus before returning to the course.

"Last time, we had a rain delay to kind of give us like a mental reset, you know, that we didn't get today, which you don't ever hardly get," she said. "But it really treated us well last time, as far as the rain delay goes. But yeah, everything was a lot faster, and it was totally different golf course."

Lake Hamilton had just two golfers who qualified as individuals, and head coach Brandi Higginbotham was pleased with the way they played.

"I thought they did really well under the conditions," she said. "The conditions today seemed better than last Tuesday with the wind and the rain, but actually, this course played really tough today, and there was more wind than you really could tell that there was. So I'm very pleased with with both Ginny (Higginbotham) and Jordyn's (Garner) efforts."

As the tournament organizer, Higginbotham also felt as though it went well.

"Well, as far as the play, I thought there were some kids that really struggled out here that maybe do better on less hilly courses," she said. "But overall, the kids really just pushed through and tried to do the best they could because there were a lot of them put a little pressure on themselves, I think, out here. And I think it played in Emma's favor to play on this course probably at least 12 times over the past four years, and it really paid off for her probably today and at the conference tournament for her to know the course well and know she could she could push on through any struggle she had."

The Class 5A Boys State Tournament will be held next Tuesday at Mystic Creek with an 8:30 a.m. tee time.