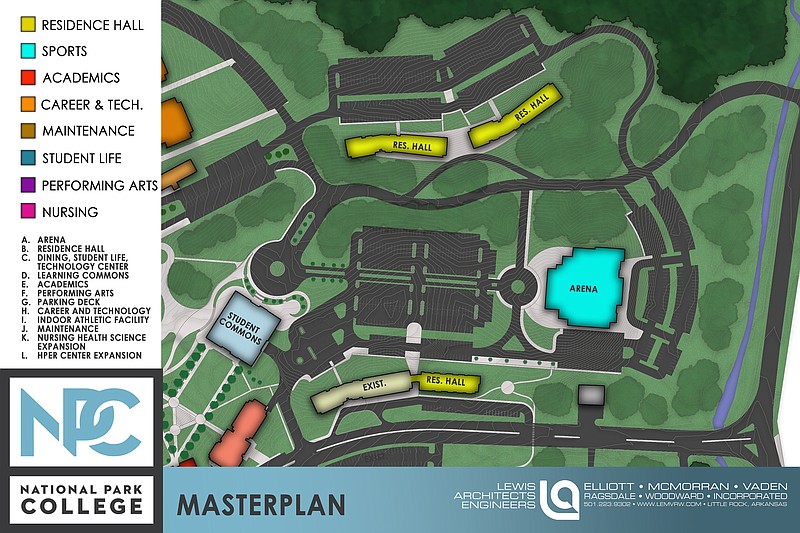 Architect John McMorran, of Lewis Architects Engineers, presented the concept to "maximize the campus' natural setting and address the needs for growing programs while keeping in mind future growth and opportunities."

The NPC Campus Planning and Development Committee worked with McMorran to create a vision for the college's future, based on data and feedback received from the campus and community stakeholders.

"What we're trying to do is set a higher vision and trajectory for NPC," NPC President John Hogan said. "This is a part of a lot of dialogue -- on the part of this board, hopefully from the community, from our faculty and staff -- and we're unveiling it here because we want you to see it first before we start that process of gathering feedback.

"So we, as (Trustee) Raymond (Wright) said -- we're trying to make a very large footprint and a very large impression about what NPC can become, and this is a communication for how our imaginations can be struck," he said.

While neither Phase 1 nor Phase 2 of the plan has been finalized, the board saw a presentation of the overall picture before public forums are set to be held. Between Oct. 1 and 15, the college will host six public forums, with specific forums for students, employees and the community, to gain feedback and further refine the master plan.

Renderings, event information and an online feedback survey are available at http://www.np.edu/masterplan. The board plans to review the gathered feedback and input for final approval during its October monthly meeting. If approved, planning will move forward on Phase 1.

"I think in order for us to be successful as we grow, as we expand, as we make a difference in the community, I think having a plan -- a long-term vision or long-term look -- is very important," NPC Board Chair Forrest Spicher said.

"And stretching our imagination for the next 20, 25 years is certainly important. Just like any plan, it should take on its own life. It should be a breathing, living dynamic plan that will give us a tool for planning and executing a vision at this college. Certainly, it'll be our guide, but we will see it'll change as we consider how we grow and how we reprioritize. And so over the next couple of decades and beyond, we'll certainly use this as something as a guiding instrument," he said.

Various sections outlined by the master plan include expansion for academics, workforce and skilled trades, nursing and health sciences, technology and fine arts, including a performing arts center, and additional student housing.

Also included are several components for intramural sports, consisting of baseball, softball and soccer fields, a track, indoor practice facility and a roughly 2,500-seat arena for basketball and other events. McMorran said the arena would be constructed at the front of campus for easy access and visibility.

He said they tried to tie all of the expansion components together with the student life experience, creating a parklike atmosphere throughout campus while moving the parking to the outside portions.

"We had a quick meeting just a couple days ago and we've made some revisions since then, but in that meeting, just kind of thinking through the components of the master plan, they're really smart and they make a lot of since," he said.

"And they're aggressive but it's not over the top. And just from what we've seen in master plans previously -- in different areas and different types of master plans -- this one really makes a lot of sense to us. So we're excited to present it to you."

Regarding the growth needed to support it, the master plan is based on 1,000 students living on campus but has the capacity for 4,500 to 5,000 students on campus.

"We were considering just the makeup of the campus and how it's changed," said Hogan. "Compared to our colleges in Arkansas, we have the largest number of student-athletes and the largest on-campus population of any community college in Arkansas this fall. So those are significant things to ponder as we think about the master plan and how that's changed the personality of our campus and changed the challenges that are ahead for this board and this executive team and the faculty and staff on the campus."

Hogan said the master plan is "more than a dream."

"We have something that's a 30,000-foot picture and over the next four weeks or so, we're going to work with all of you and our greater community to bring that picture into better focus. And each day the calendar passes, we'll put it into a little more bigger focus," he said.

"So our students are going to continue to be the main architects. We have listened to them, we've executed plans based on what we hear, and we're successful because we're willing to listen to our students. So success in the master plan, success in enrollment, success in campus life, all that adds up to our students (being) successful. Because if they're not, the rest of it doesn't make any difference," Hogan said.

"This sets out a road map for whenever we determine those phases, that we know everything is eventually going to fit. We try to set big vision for the college for the next 25 years. Intentionally, the ambitions in terms of enrollment -- I think it makes sense to set those at a high level. Our student housing can facilitate some of that but, obviously, the construction will have to facilitate that too. I think it will dictate much of how the college's future goes in the next two and a half decades," he said.

Jerry Thomas, vice president for student affairs and enrollment management, shared the fall enrollment report, noting NPC is slightly up in students and semester credit hours. Enrollment for fall 2021 is 1,920 compared to 1,914 enrolled in 2020 as of the 11th-day census count.

NPC was one of two community colleges in the state to see growth in undergraduate college students, with a 22% increase in new students. Semester credit hours for fall 2021 are 22,445 compared to 22,270 for fall 2020.