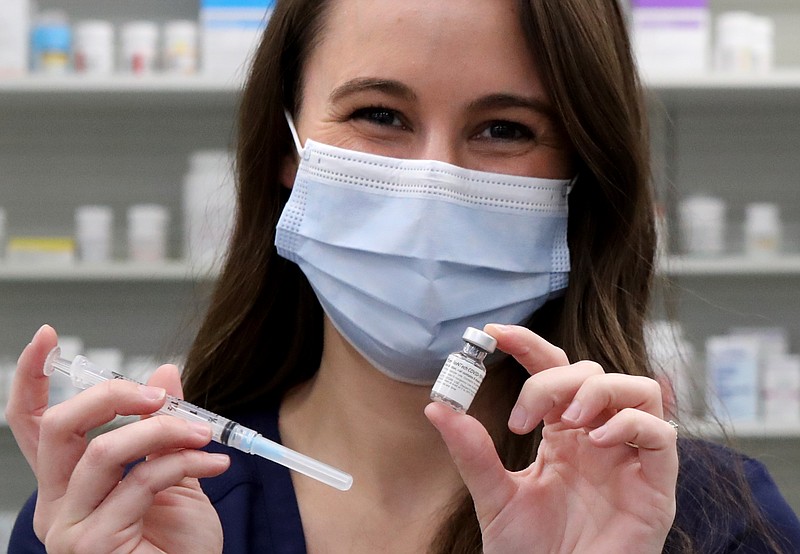 Smith Drug and Compounding Pharmacist Jessica Thornton displays a COVID-19 vaccine on Wednesday. - Photo by Richard Rasmussen of The Sentinel-Record

Garland County's overall cases of COVID-19 continue to drop, according to the county's health officer.

As of Monday, the number of active cases had dropped by 68 over the previous week, to 276, and was down to 275 as of Tuesday.

County Health Officer Dr. Gene Shelby said Wednesday the county's average number of cases per day has stabilized at 31.7% this week, down from 32.6% the previous week.

The numbers also show a decline in active cases at the area schools. School officials reported only 24 cases among students and staff in the county's seven public school districts at Monday night's weekly Hot Springs/Garland County COVID-19 Task Force meeting, down from 33 as reported on Sept. 20.

"Our numbers, our active cases are definitely going down, which is a good trend that we've had really for the last, you know, five or six weeks since we kind of had our big peak in August when we had over a thousand active cases," Shelby said. "But we're seeing a downward trend across the state -- really across most of the United States -- so we're kind of in line with that."

Shelby said he continues to look at where the county was one year ago and the present numbers still remain higher. According to statistics, Garland County has an additional 100 positive cases this week than it did this week last year, but it also saw the lowest number of COVID-related deaths in the county in about eight weeks, with two.

"So our numbers are higher than they were a year ago but certainly it's been on a downward trend and I think we're kind of more on a plateau right now," he said. "We'll just kind of have to see. ... Probably the other really good news that we had from the meeting was the report from the school districts. All the school districts had showed significant drops in the number of active cases and quarantines, so that was very encouraging.

"I think everyone felt really, really good about those numbers and how good the schools are doing in terms of, you know, really emphasizing getting as many people vaccinated. I think they're still doing some vaccination clinics at the schools and those are very encouraging numbers for sure," he said.

Shelby said he still recommends that each school keep its mask mandate in effect until at least late October.

"That's been my recommendation all along because, you know, the masks are a real important part of the effort to reduce the spread, and even though our numbers have come down, I want them to stay down and go down further," he said. "So I would really encourage organizations and just schools to continue wearing masks until we see a further downward trend. And like I said, I think it'll be November before we'll know if we're going to start to have a winter spike."

The vaccination rate in Garland County continues to go up about 1% each week and currently sits at 45%, compared to Arkansas' 54.9% and the United States' 65%.

"You know, I was listening to the governor's press conference yesterday (Tuesday) and he's hoping that we've got enough people vaccinated that we won't have a winter spike like we did last year," Shelby said. "And I certainly hope that, too, but I wouldn't say that we're there yet and we probably won't know until the end of October, first part of November."

In regard to the area hospitals, CHI St. Vincent Hot Springs and National Park Medical Center reported a total of 31 COVID patients, a drop of one over the week, with 15 in intensive care and 10 requiring the use of ventilation.

Shelby noted one thing that does not need to be overlooked this fall is the importance of the flu shot. He spoke about that importance in Monday night's meeting, as did Arkansas Health Secretary Dr. Jose Romero on Tuesday.

"You know, the last year, we didn't really have a flu season and most people attribute that to the fact that people were wearing masks," Shelby said.

"And the masks are highly effective in preventing the spread of flu, so the concern is that since we didn't really have much of a flu instance last year that people will be more susceptible to bad outcomes or cases of the flu. So I think that getting a flu shot is definitely important this year and we're really encouraging people, and our local health unit is doing some flu clinics at the schools. But I think the main thing that we really want to emphasize is getting a flu shot is important every year but it's extra important this year."