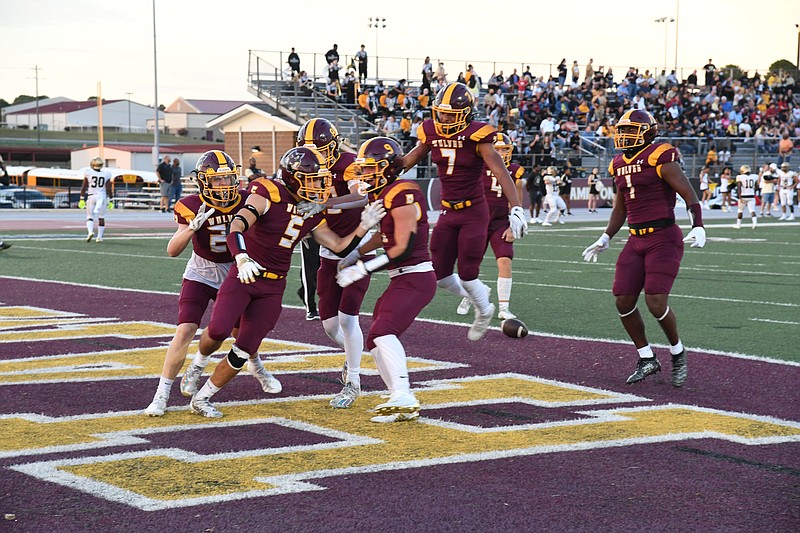 Lake Hamilton's Justin Crutchmer (5) celebrates with his teammates after scoring a touchdown against Hot Springs on Sept. 17. The Wolves host Little Rock Parkview Friday. - Photo by Tanner Newton of The Sentinel-Record

"(It's a) really good Parkview team. I didn't realize this until Hooten's had a little thing. I read their little blurb. They've got six Division I football players. ... We've got one, and he's not big Division I. I know some of theirs are big ones because I know that running back's U of A, and then I know that quarterback is Ole Miss, and then I know another kid, a receiver is Memphis. I don't know the other ones, but I knew those three."

Despite the fact that the Patriots seem to have the game in the bag on paper, Gilleran said that he feels good about the upcoming contest.

"We feel good," he said. "I mean, you know, we've been working all year for something like this, you know, playing a big game like this, have a chance to play a great football team. You know, the biggest thing I'm excited about this year -- our defense has been playing well all year. So that's a huge bump, you know, because in the past, we've had to outscore people and do things, but our defense this year has really gave us field position. And, you know, a lot of three-and-outs, so our kids have played really well this year."

Two weeks ago, the Wolves lost the team's all-time leading rusher in senior Owen Miller after a season-ending knee injury at Malvern.

"Owen's going to get surgery this next week," Gilleran said. "Owen's done with football."

"We knew he was good," Gilleran said. "He just started on defense, and so he didn't get many chances to play. But we knew he was a really good football player. And you know, in junior high, he had almost 2,000 yards rushing, so we knew he was a good running back. He just, you know, he hadn't had an opportunity to because Owen and Tevin had been there. And then, of course, Kendrick has been there.

"So yeah, we knew he had a chance to be good. We didn't know how good, and of course he's, you know, he's at over 100 yards in two games. And so we feel like, you know, we still have the three-headed monster. It's just a new, new guy that's filled in the spot."

Gilleran said that his biggest concern going into this week's contest is "playing four quarters." The Wolves have essentially sat their first-string players after the first half in a start that has Lake Hamilton having outscored its opponents 160-32.

"We've been blessed this year," he said. "We haven't had to play a full game yet, and so, you know, a lot of our games -- in fact, every game has been in the mercy rule except for Lakeside, and Lakeside is because we missed an extra point in the third quarter. We played other kids from that point on, and so, you know, we're gonna play four quarters to beat these guys. I mean, they're, they're a good football team, but we have to be ready to play all four quarters and be ready for that type of game."

The Patriots run a Spread offense, but Gilleran estimates that they keep the ball on the ground for 70% of their plays.

"They run a lot of the same Spread stuff," he said. "You know, the only thing that they do different that a lot of teams don't do is do two tight ends. But you know, we've seen a lot of run-heavy set stuff, so our kids are ready for it. In fact, we're good at that because that's what our kids see all year is us. And so running the football is something our kids are usually good at. Usually we're not good at covering the pass, but I think we're good at both this year."

One boon for the Wolves is the knowledge that they have plenty of depth to step up, since most of their younger players have gotten to play for most of the second half.

"It's a big deal," Gilleran said. "It's good experience for those kids. You know, if somebody goes down, we know we have somebody now that can, that can handle the, you know, the experience of playing against other teams. If they get experience, it makes a huge deal for our kids and our future of this program."

Going into their Week 5 matchup, Lake Hamilton is back as close to full-strength as possible.

"We're actually really good," Gilleran said. "Ken Dong was our starting defensive end, didn't play last week because of his ankle, but he'll be here this week. We've had another kid get banged up, but he's back."