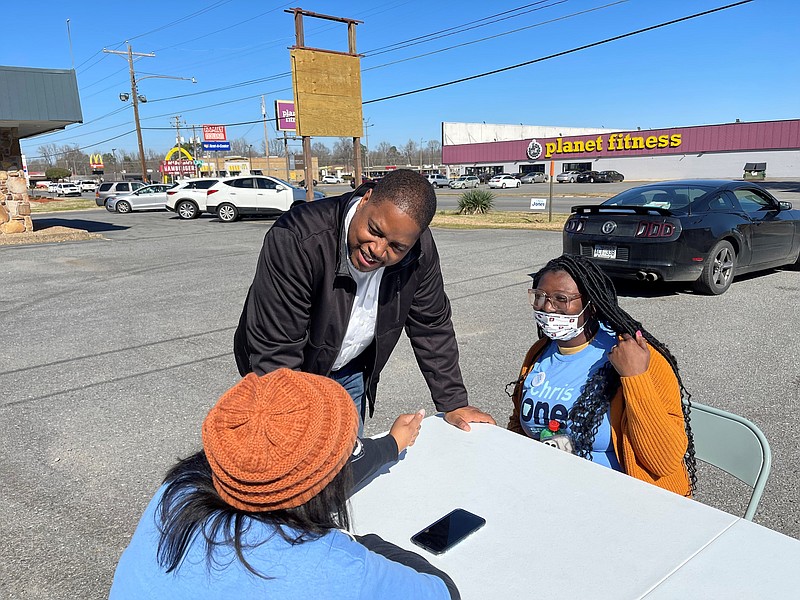 PINE BLUFF -- Chris Jones would seem to have an ideal biography to run for governor, a job that's wide open in Arkansas for the first time in eight years.

He's both an ordained Baptist minister and a nuclear engineer who can talk about his faith as easily as scientific concepts. He's upbeat and personable, as evidenced by his announcement video that quickly went viral nationwide.

There's a catch, though. Jones is a Democrat in a state that has gone from red to extremely red in recent years. Donald Trump carried it in 2020 with 62% of the vote. And he's Black, where Black people account for only 16.5% of the population and where no African American has ever won statewide office.

Most experienced pols consider the race beyond a long shot, but it represents a change in thinking about how the Democratic Party can rebuild in heartland states where it has become almost extinct as white rural voters migrated en masse to the GOP.

In years past, Democrats in the region usually tried to win over independent and moderate voters by running white establishment candidates. That approach produced little. Now they're hoping to mobilize voters who haven't been involved in the process, especially Black, Latino and younger people.

"It's clear to me folks are ready," Jones said during an interview in his hometown of Pine Bluff, a predominantly Black city an hour south of Little Rock. "There's a moment where folks are saying of all the barriers and the ceilings to be broken, here's one we want to break."

This year dozens of Black Democrats are running for office in places that Trump won easily. Many are political newcomers who were motivated by the protests over police tactics following the killing of George Floyd, or advances by Black Democratic candidates in once solidly red states like Georgia.

"The ball is moving down the field in terms of more progress being made," said Tolulope Kevin Olasanoye with the Collective PAC, which recruits and supports Black candidates.

Jones is one of two Black candidates running for Arkansas governor in the May Democratic primary, which also includes an Asian American woman. Two Black Democrats are also running for the Senate seat held by Republican John Boozman.

African Americans are among the leading Democratic challengers for several Republican-held Senate seats, such as Cheri Beasley in North Carolina and Val Demings in Florida. In Kentucky, Charles Booker is making an uphill bid to unseat Republican Sen. Rand Paul. Iowa's Deidre DeJear is the only Democrat challenging Republican Gov. Kim Reynolds.

Black voters and officeholders already hold considerable sway in the Democratic Party in blue states, but some say it's time for African American candidates to take the lead in attracting new voters elsewhere and elevating top social issues.

In Oklahoma, where the party has a long losing streak, many Democrats hailed the decision by the state's popular education commissioner, lifelong Republican Joy Hofmeister, to switch parties and challenge GOP Gov. Kevin Stitt as a Democrat. Even though it probably improved the party's chances, many African American activists were aggravated that Hofmeister, who is white, drew support away from Black candidate Connie Johnson.

Hofmeister "is not coming to any Black Lives Matter protests," said Joshua Harris-Till, a Black party organizer and candidate for a U.S. House seat. "We're probably not going to see her veto legislation like some of these insane gun bills. We're not going to see her championing the right of women to choose."

In Arkansas, Jones, who had never run for office, launched his bid for governor with a video highlighting his roots in the state and drew contrasts with Sanders' frequent broadsides against the "radical left," criticism of President Joe Biden and echoes of Trump.

He dubbed his platform "PB&J," which he says stands for preschool, broadband and jobs.

Sanders, he charged, is engaging in "the kind of politics that fans the flames of an angry mob willing to mow down police officers in order to attack school kids at Little Rock Central High," a reference to the 1957 desegregation crisis.

Sanders' campaign didn't respond to a request for comment on Jones' remark, and has essentially ignored him and her other rivals for governor.

Jones' announcement video featured him walking into a church and using his minister's stole to tell his family's story. Jones, the son of two preachers, attended Morehouse College on a scholarship from NASA and later went to the Massachusetts Institute of Technology. Before jumping into the governor's race, Jones headed the Arkansas Regional Innovation Hub, a nonprofit that helps entrepreneurs.

The notion that Jones' candidacy will boost Democrats is met with skepticism in Arkansas. The state's last Democratic governor, Mike Beebe, won all 75 counties in 2010, but the party's last nominee won less than a third of the vote.

"Generally speaking, the team that starts talking about voter turnout and even more so voter registration is the team that's already guaranteed a loss," said University of Arkansas political science professor Janine Parry. White people make up 73% of the state's voting age population, compared with about 64% nationally.

Parry, however, noted that such races could help build a bench of candidates and expand the electorate as the state's demographics change.

Jones faces a huge fundraising gap. Sanders has been shattering fundraising records while Jones reported less than $200,000 on hand in his latest filings.

But he is campaigning actively, holding voter registration drives and even venturing into seemingly hostile territory like Harrison, a town in the Ozarks that has struggled with racism and white supremacy over the years.

Win or lose, he insists the effort is worth it.

"Anytime you can bring candidates who can lift up the voice of those who haven't been part of the process before -- whether it's Black, Latinx, disabled, veterans, you name it -- who have been locked of the process, it's going to be helpful," Jones said. 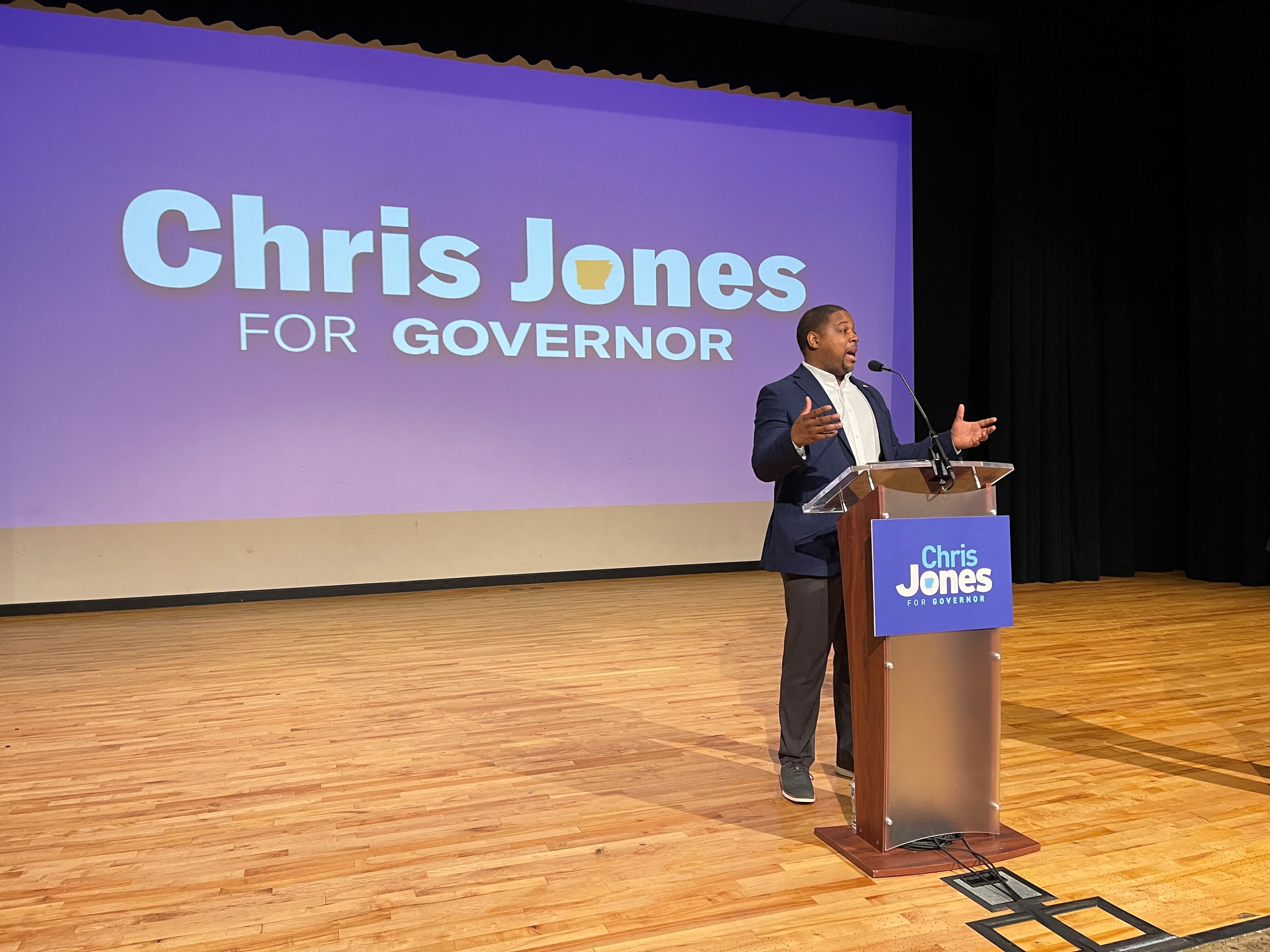 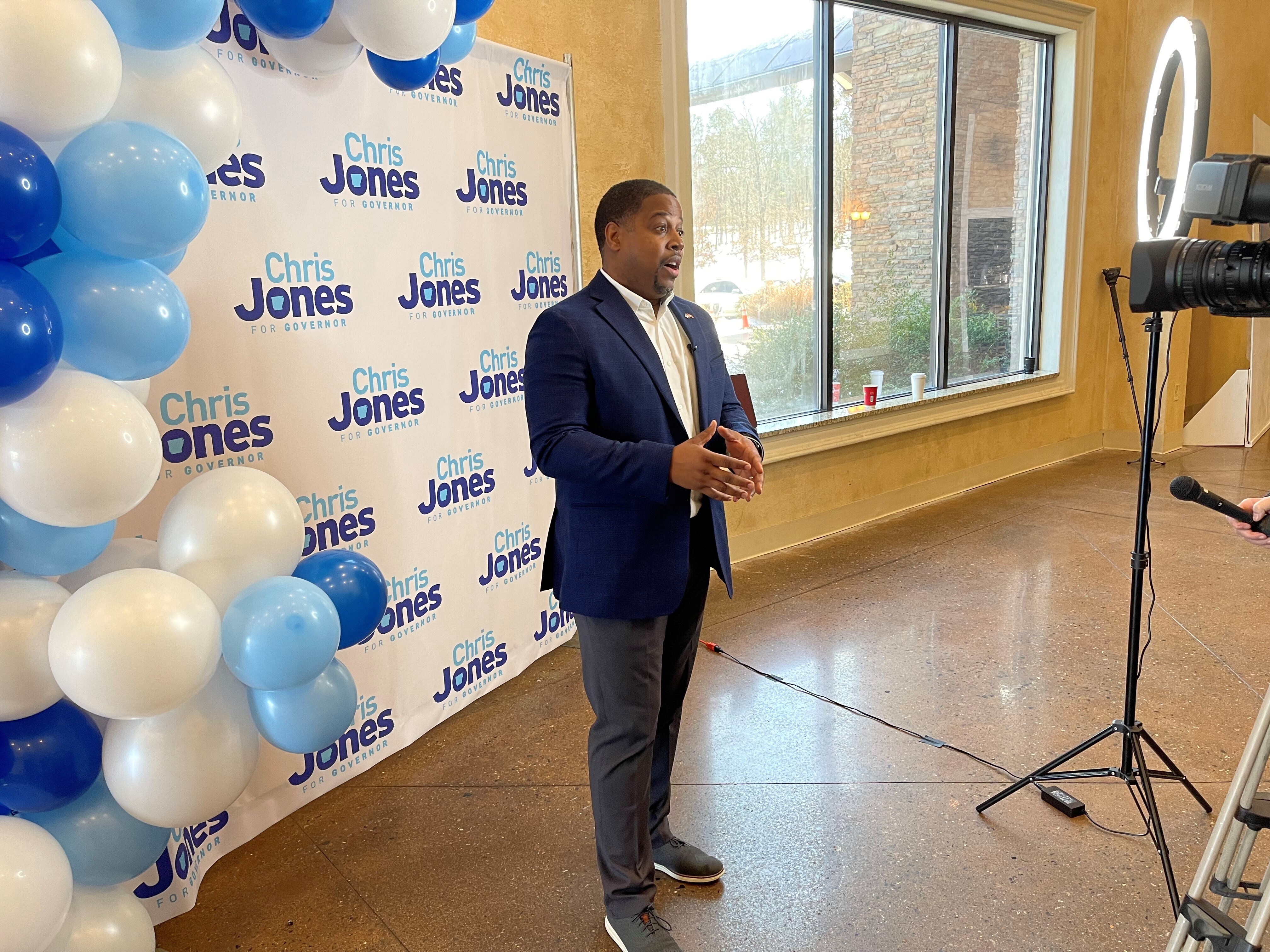 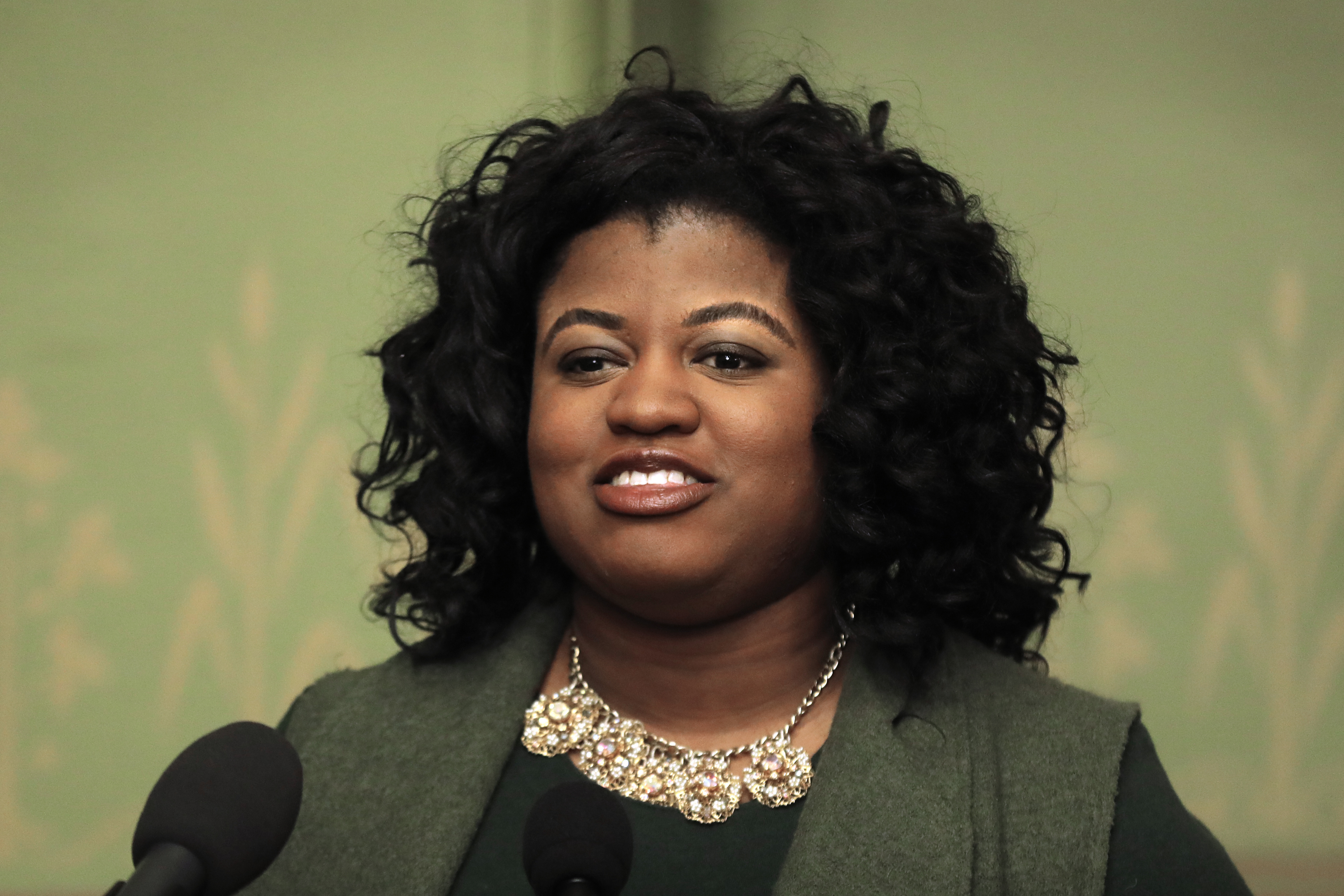 Deidre DeJear speaks during a news conference at the Statehouse in Des Moines, Iowa, Jan 23, 2019. On Saturday, Aug. 14, 2021, the voting rights advocate announced she will seek the state's governorship in 2022. DeJear is among dozens of Black Democratic candidates are seeking office in heavily Republican states that former President Donald Trump won easily in 2020. (AP Photo/Charlie Neibergall, file) 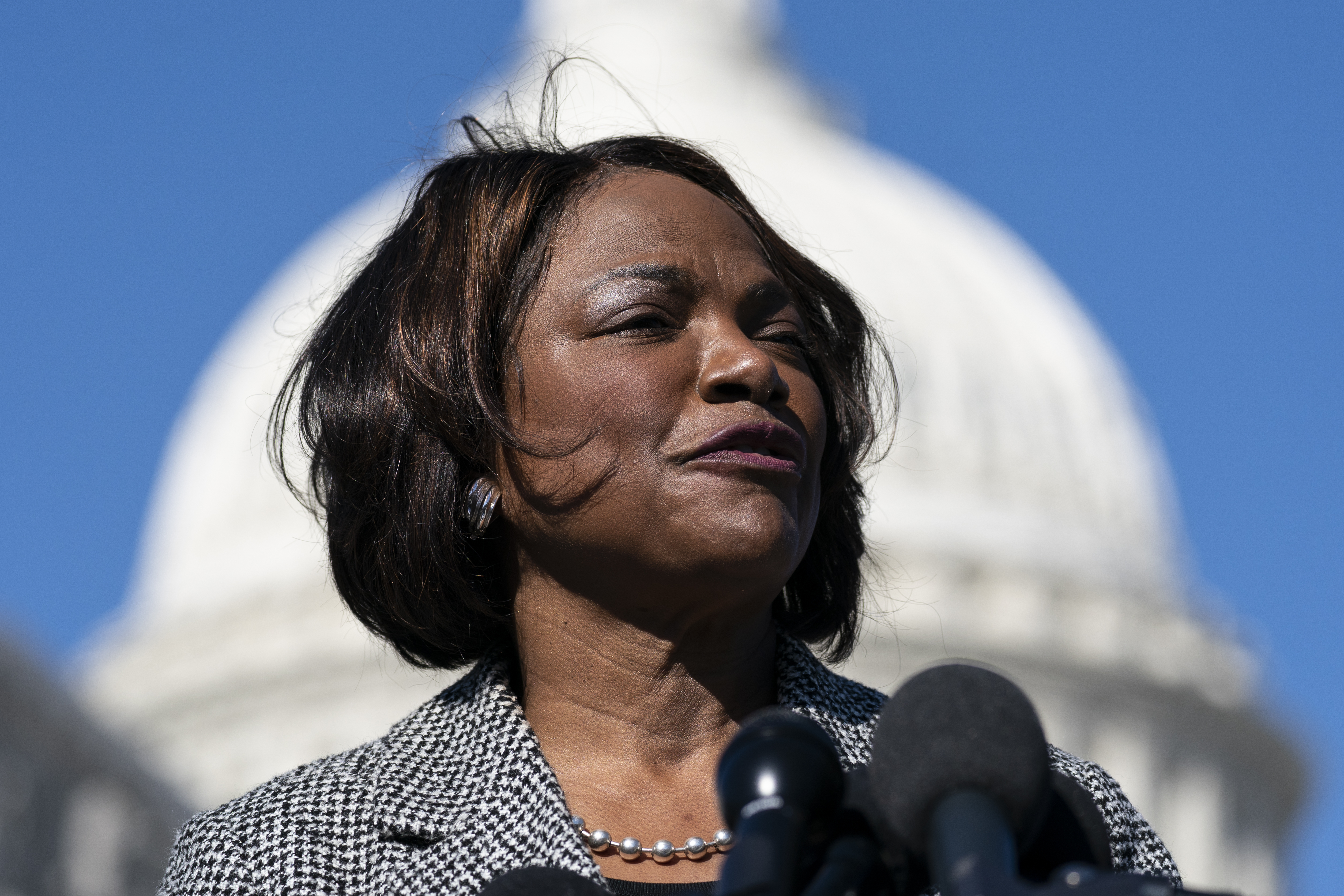 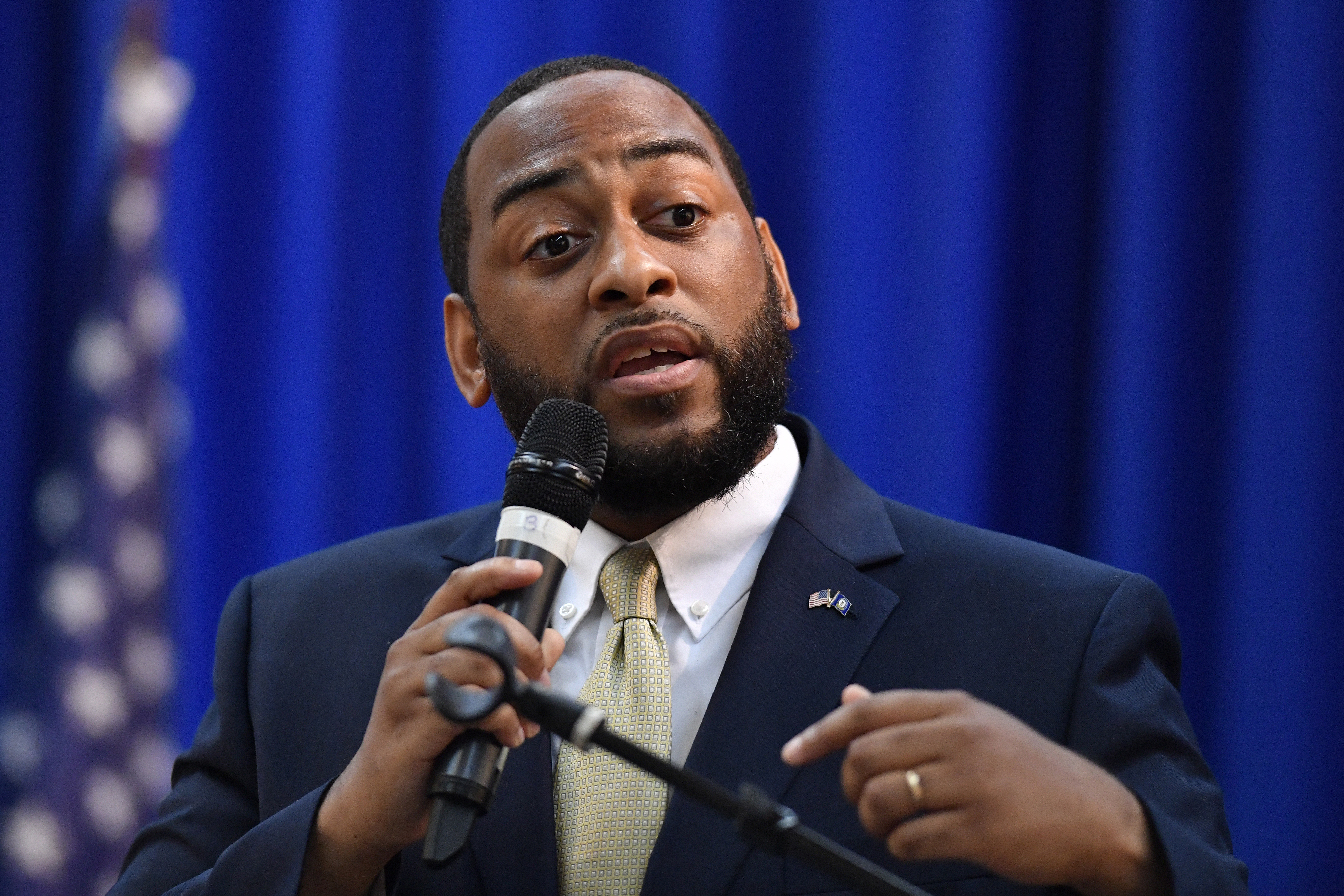 Democrat Charles Booker Speaks to a gathering of supporters as he announces his candidacy for the United States Senate at the Kentucky Center for African American Heritage in Louisville, Ky., Thursday, July 1, 2021. He will be running against incumbent Rand Paul, R-Ky. Brooker is among dozens of Black Democratic candidates are seeking office in heavily Republican states that former President Donald Trump won easily in 2020. (AP Photo/Timothy D. Easley, file)