US wants to stretch monkeypox vaccine supply with smaller doses 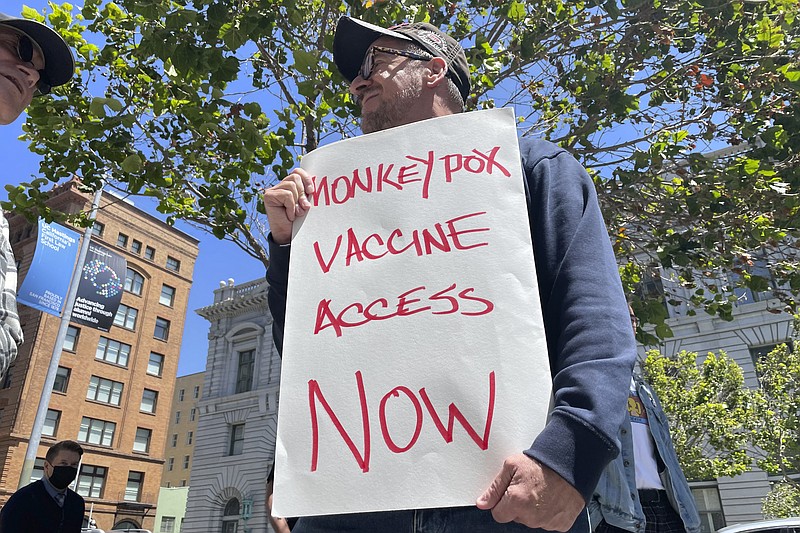 FILE - A man holds a sign urging increased access to the monkeypox vaccine during a protest in San Francisco, July 18, 2022. U.S. health officials on Tuesday, August 9, 2022, authorized a new monkeypox vaccination strategy designed to stretch limited supplies by allowing health professionals to vaccinate up to five people — instead of one — with each vial. (AP Photo/Haven Daley, File)

WASHINGTON -- U.S. health officials on Tuesday authorized a plan to stretch the nation's limited supply of monkeypox vaccine by giving people just one-fifth the usual dose, citing research suggesting that the reduced amount is about as effective.

The so-called dose-sparing approach also calls for administering the Jynneos vaccine with an injection just under the skin rather than into deeper tissue -- a practice that may rev up the immune system better. Recipients would still get two shots spaced four weeks apart.

The highly unusual step is a stark acknowledgment that the U.S. currently lacks the supplies needed to vaccinate everyone seeking protection from the rapidly spreading virus.

That includes 1.6 million to 1.7 million Americans considered by federal officials to be at highest risk from the disease, primarily men with HIV or men who have a higher risk of contracting it. Vaccinating that group would require more than 3.2 million shots.

"It's safe, it's effective, and it will significantly scale the volume of vaccine doses available for communities across the country," Robert Fenton, the White House's monkeypox response coordinator, told reporters.

The Biden administration declared monkeypox a public health emergency last week in an effort to slow the outbreak that has infected more than 8,900 Americans. Officials announced a separate determination Tuesday that allows the Food and Drug Administration to expedite its review of medical products or new uses for them, such as the dose-sparing technique for Jynneos.

The FDA authorized the approach for adults 18 and older who are at high risk of monkeypox infection. Younger people can also get the vaccine if they are deemed high risk, though they should receive the traditional injection, the agency said.

FDA officials stressed that the second dose is critical to ensuring protection.

"We feel pretty strongly that the two doses are necessary because, in part, we don't have any evidence that three, six, eight months later people will be adequately protected by a single dose," said Dr. Peter Marks, the FDA's vaccine chief.

Regulators pointed to a 2015 study showing that inoculation with one-fifth of the traditional two-dose vaccine generated a robust immune-system response comparable to that of the full dose. About 94% of people receiving the smaller dose had adequate levels of virus-fighting antibodies, compared with 98% of those receiving the full dose, according to the study funded by the National Institutes of Health.

The NIH is planning an additional trial of the technique. And Centers for Disease Control and Prevention Director Dr. Rochelle Walensky said her agency is already starting to track real-world vaccine effectiveness in U.S. communities, though initial estimates will take time to generate. But some experts and advocates worried that with little data to support the policy, it could backfire if it reduces vaccine effectiveness.

"We have grave concerns about the limited amount of research that has been done on this dose and administration method, and we fear it will give people a false sense of confidence that they are protected," said David Harvey of the National Coalition of STD Directors, in a statement.

The smaller doses also require a different type of injection that penetrates only the top layer of skin, rather than the lower layer between the skin and muscle. That's a less common technique that may require extra training for some health practitioners. But infectious disease specialists said it shouldn't be a major obstacle.

"Intradermal administration is certainly something that has been used for other vaccines, including the smallpox vaccine, which was administered to hundreds of millions of people during the 20th century," said Anne Rimoin, director of UCLA's Center for Global and Immigrant Health.

The shallower injection is thought to help stimulate the immune system because the skin contains numerous immunity cells that target outside invaders.

The CDC said it will provide educational materials on the technique along with a broader awareness campaign for U.S. health departments.

Rationing vaccine doses is common in Africa and other parts of the world with limited health resources. In recent years the World Health Organization has endorsed the strategy to address outbreaks of yellow fever, polio and other diseases.

"This is not an uncommon situation" said Dr. William Moss of Johns Hopkins' Vaccine Access Center. "It comes down to the public health decision-making: In the midst of an outbreak where you have insufficient supply, do you make this tradeoff?"

Both the U.K. and Canada have adopted a single-dose vaccine strategy prioritizing people who face the highest risk from monkeypox. And health departments in several large U.S. cities adopted a similar strategy amid limited supplies, including New York, San Francisco and Washington.

Officials said Tuesday that anyone who previously received a full first dose can get the smaller amount for their second dose.

U.S. officials have shipped more than 625,000 full vaccine doses to state and local health departments. So far the shots have been recommended for people who have already been exposed to monkeypox or are likely to get it due to recent sexual contacts in areas where the virus is spreading.

The Biden administration has come under fire for not quickly marshaling millions more doses from the strategic national stockpile. Officials have ordered 5 million shots since July, but most aren't expected to be delivered until 2023. Under the new dosing strategy that would represent 25 million doses.

The U.S. owns bulk vaccine ingredients equivalent to 16.1 million doses under contracts with Danish manufacturer Bavarian Nordic. But the material needs to be sealed in vials, a process that's expected to take months.

The FDA approved the Jynneos vaccine in 2019 to prevent smallpox and monkeypox based, in part, on studies in monkeys. Animals that received the two-dose vaccination were more than twice as likely to survive than those who didn't after being infected with monkeypox, according to FDA labeling.

Additional human studies showed people who received Jynneos had an immune response similar to those who received an older smallpox vaccine. But Jynneos hasn't been tested in humans with either monkeypox or its relative smallpox, which was eradicated decades ago.

The Associated Press Health and Science Department receives support from the Howard Hughes Medical Institute's Department of Science Education. The AP is solely responsible for all content. 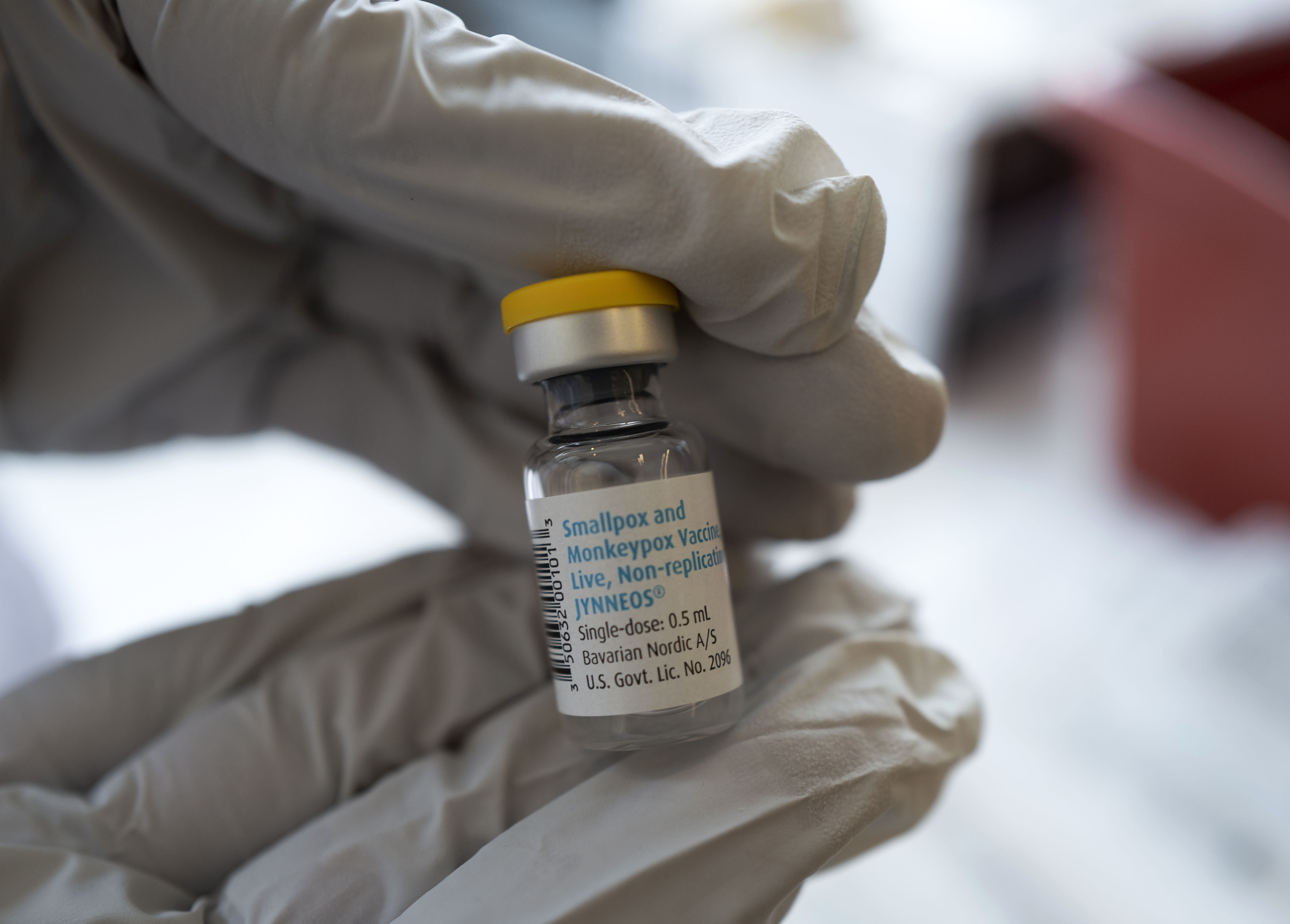 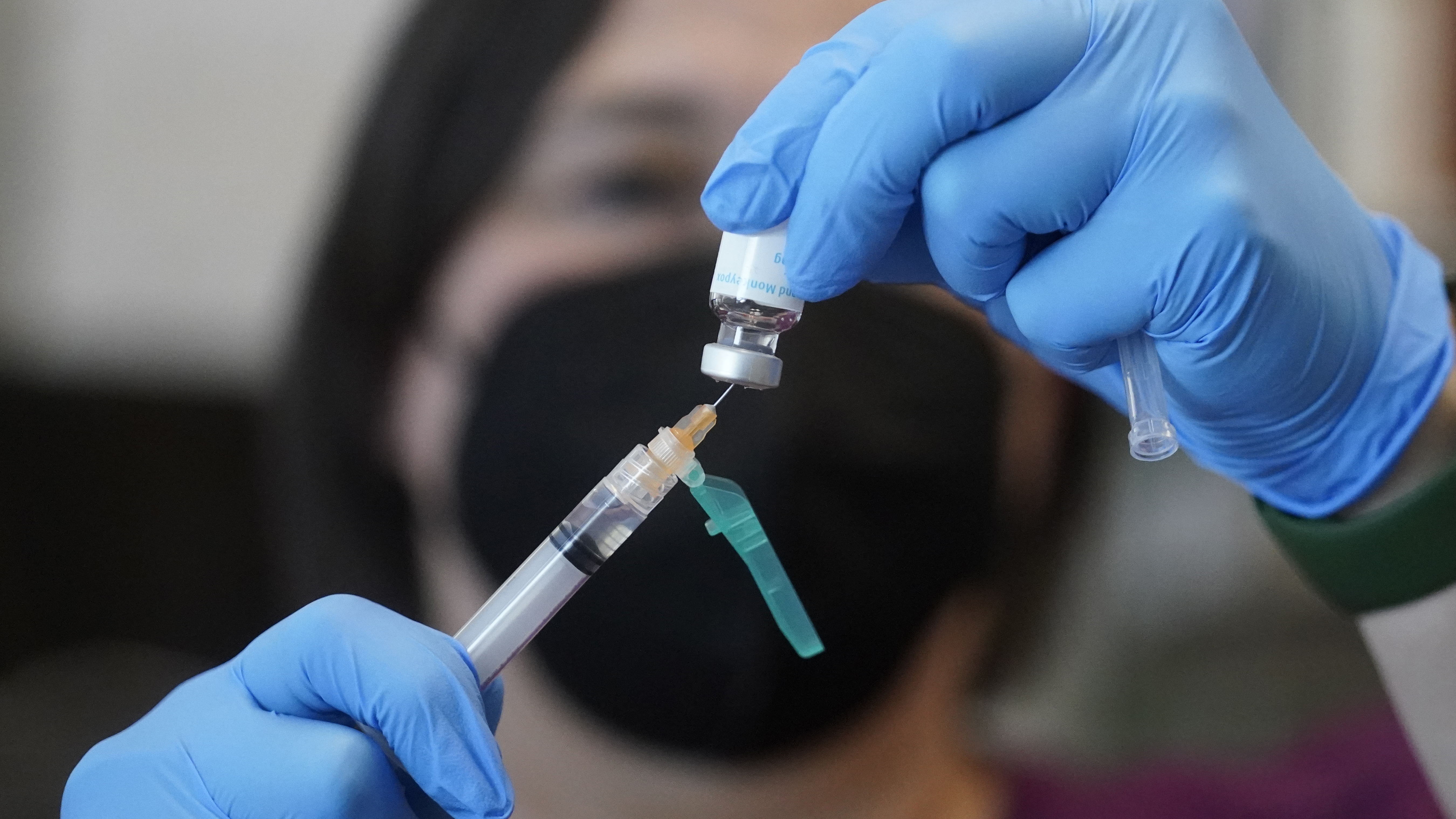 FILE - A registered nurse prepares a dose of a Monkeypox vaccine at the Salt Lake County Health Department Thursday, July 28, 2022, in Salt Lake City. U.S. health officials on Tuesday, Aug. 9, 2022, authorized a new monkeypox vaccination strategy designed to stretch limited supplies by allowing health professionals to vaccinate up to five people — instead of one — with each vial. (AP Photo/Rick Bowmer, File)