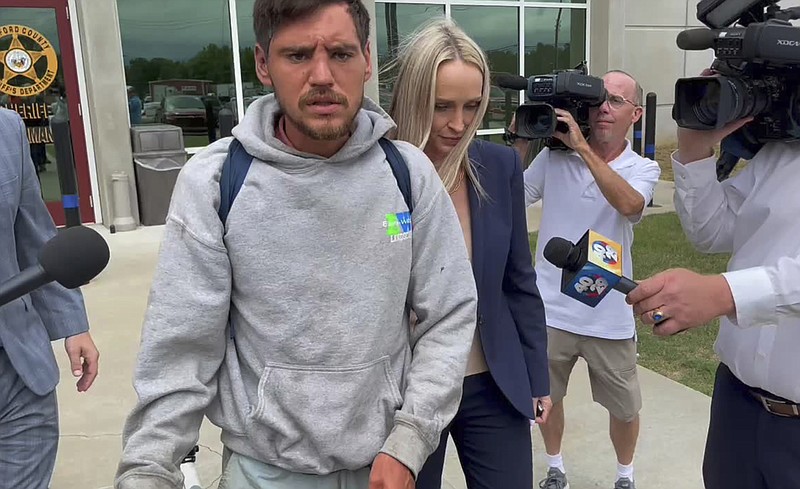 Randal Worcester walks out of the Crawford County Justice Center in Van Buren, Ark., Monday, Aug. 22, 2022. Three Arkansas law enforcement officers were suspended after a video of Worcester's arrest showed two of them beating the suspect while a third officer held him on the ground outside a convenience store. (AP Photo/Andrew DeMillo)

The attorney for a man seen on video being punched and kneed by Arkansas officers said Tuesday that the violent arrest is part of an alleged pattern of excessive force by a sheriff's deputy, and policing experts said some of the blows appeared to be unjustified or even criminal.

A bystander's video of 27-year-old Randal Worcester's arrest on Sunday in the small town of Mulberry sparked outrage after it was posted online. All three officers were later suspended, and state and federal authorities have opened criminal investigations into their actions. It's the latest case in which increasingly omnipresent cameras have led to consequences for officers and raised questions about what level of force police are justified in using and when.

An Arkansas sheriff's deputy was caught in the video repeatedly punching and kneeing Worcester in the head before grabbing his hair and slamming him against the pavement. As that was happening, another officer was holding Worcester down as a third also kneed him over and over.

Carrie Jernigan, an attorney for Worcester, said the deputy who punched him, Levi White, used excessive force against other people she's representing. "There's something going on and we just need to get it addressed," she said during a Tuesday news conference with her two other clients.

Russell Wood, a lawyer for the two Crawford County sheriff's deputies, stressed that the 34-second clip doesn't show everything that happened and said Worcester had earlier attacked one of the deputies, leaving him with a concussion. Wood said in a statement that the deputy's "pain compliance strikes" didn't do any "damage" and that Worcester's own violence authorized the officers to use "all necessary force."

Policing experts, however, say that blows to the head amount to the potentially deadly use of force and are only justified in an arrest when a suspect poses a current and serious threat. They say a full investigation is needed, but that the video raises obvious "red flags" about the actions of the officers, who had Worcester pinned to the ground by the time the bystander began recording from a nearby car.

"Depending on your level of resistance, (officers) could use defensive strikes or what they call pain strikes to get compliance, but that's not a blow to the head," said Geoffrey Alpert, a University of South Carolina criminology professor who studies the use of force by police. "He would have to be doing something pretty serious to get hit in the head like that."

Worcester's arrest came after police received reports about a man making threats outside of a convenience store in Mulberry, a community of about 1,600 people roughly 140 miles (220 kilometers) northwest of Little Rock, near the Oklahoma state line. He was treated at a hospital on Sunday before being jailed on charges including second-degree battery and resisting arrest. He was released Monday on a $15,000 bond.

State records show that Riddle was fired in 2008 from the police department in the nearby town of Kibler after just six months on the job for being involved in a "domestic disturbance" when a woman claimed he hit her in the eye. Riddle was not charged. The records from the state Commission on Law Enforcement Standards and Training, first reported Monday by the Arkansas Advocate, also show that Riddle resigned from the Crawford County Sheriff's Office after nearly eight years in 2008 because of "personal conflicts."

Wood said Worcester had been threatening a woman with a knife and, upon being confronted, grabbed White by the legs and slammed him to the ground, stunning the deputy. Worcester then climbed onto White and "began striking him on the back of the head and face," the attorney said.

Wood called on the Mulberry police to release dashboard-camera video, which he said shows more of what happened, and contended that in such a situation the suspect "must be taken off the streets at all costs."

Officers' use of force is regulated by both the law and department policy. Bowling Green State University criminologist Philip Stinson called what is shown on the footage of Worcester's arrest "completely unwarranted." He said an earlier attack on one of the officers might explain their actions -- suggesting their later beating of the man was punitive -- but that it wouldn't provide them a legal justification.

"The force was excessive and, in my view, criminal," said Stinson, a former officer.

The prosecution of police for using force on the job is relatively rare, and body-worn and dashboard camera videos often show officers' actions were justified. But the increasing presence of police cameras and bystanders with cellphones has also provided evidence that sometimes undercuts officers' explanations of their use of force.

In neighboring Louisiana, a state trooper also explained his use of force during a 2019 arrest as "pain compliance." The trooper later resigned and was arrested and charged with state and federal crimes after his bodycam footage showed him striking a Black motorist 18 times with a flashlight as the man wailed, "I'm not resisting!"

Stinson said that, thus far, ubiquitous cameras have not changed policing as much as they've revealed it.

"This type of thing happens with great regularity," he said. 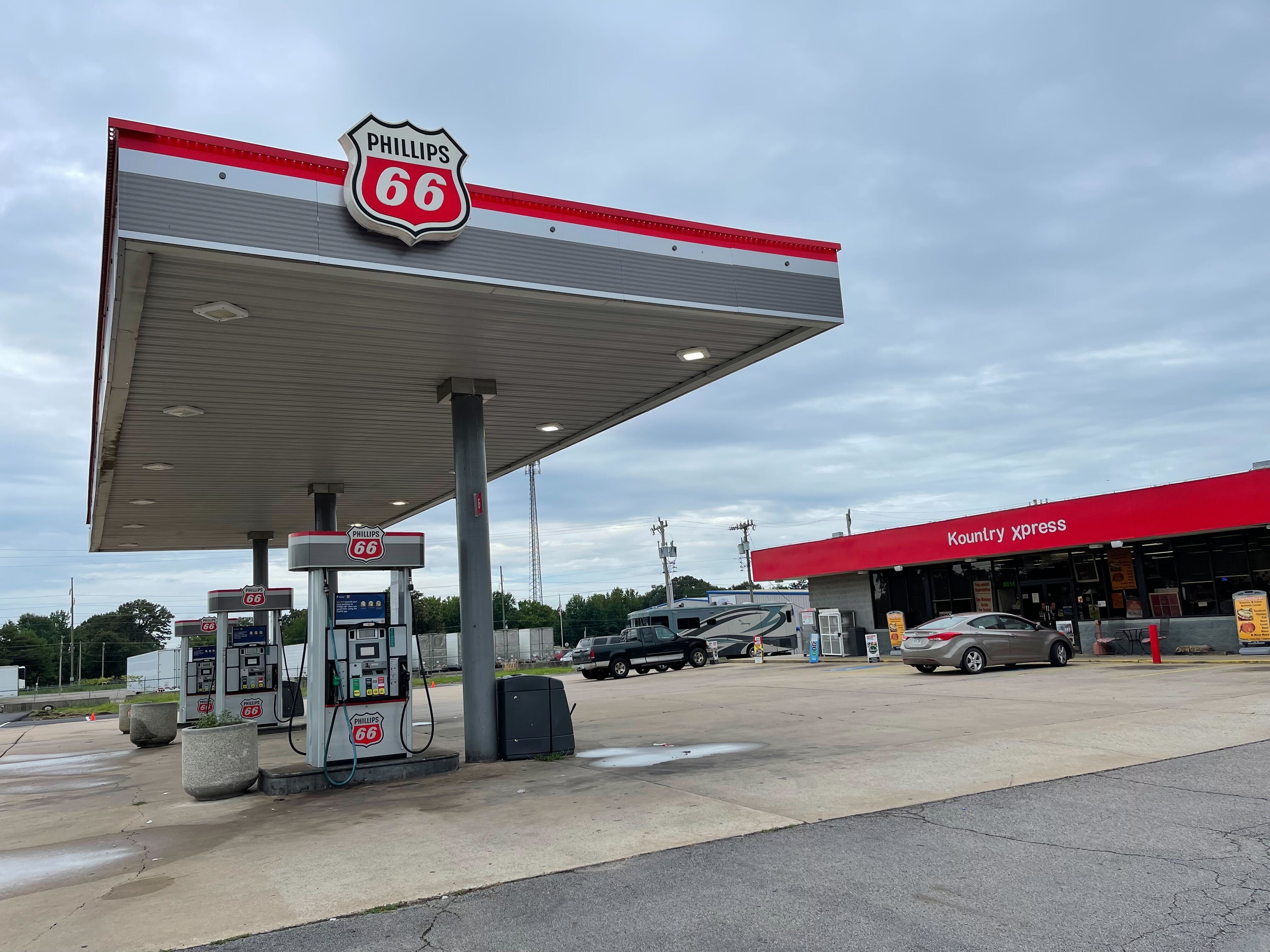 A car is parked outside the Kountry Xpress in Mulberry, Ark. Three law enforcement officers have been suspended after a video posted on social media showed a South Carolina man being held down on the ground and beaten by police. Arkansas State Police said Sunday night that it would investigate the use of force by the officers earlier in the day outside the convenience store in Mulberry, about 140 miles northwest of Little Rock. (AP Photo/Andrew DeMillo) 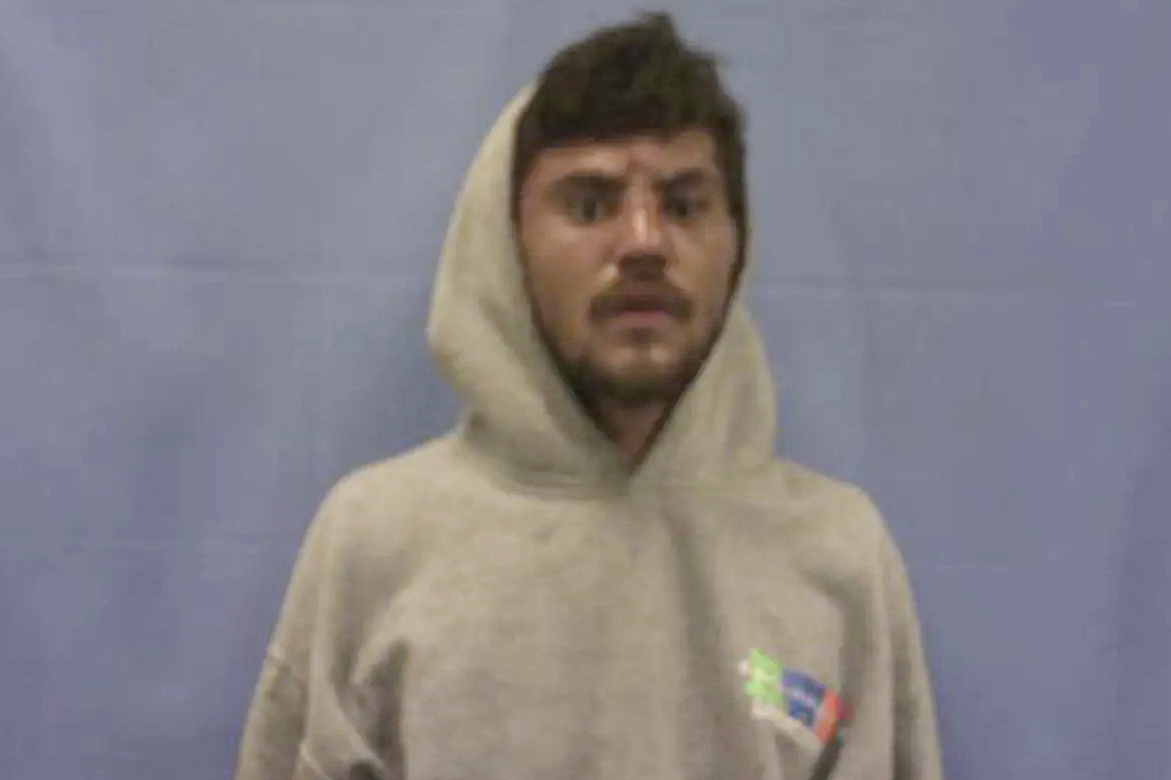 This photo provided by the Crawford County Sheriff's Department on Monday, Aug. 22, 2022, shows Randall Worcester. On Sunday, Aug. 21, officials said three Arkansas law enforcement officers have been suspended and a state police investigation launched after a video posted on social media showed Worcester being held down on the ground and beaten by police. (Crawford County Sheriff's Department via AP) 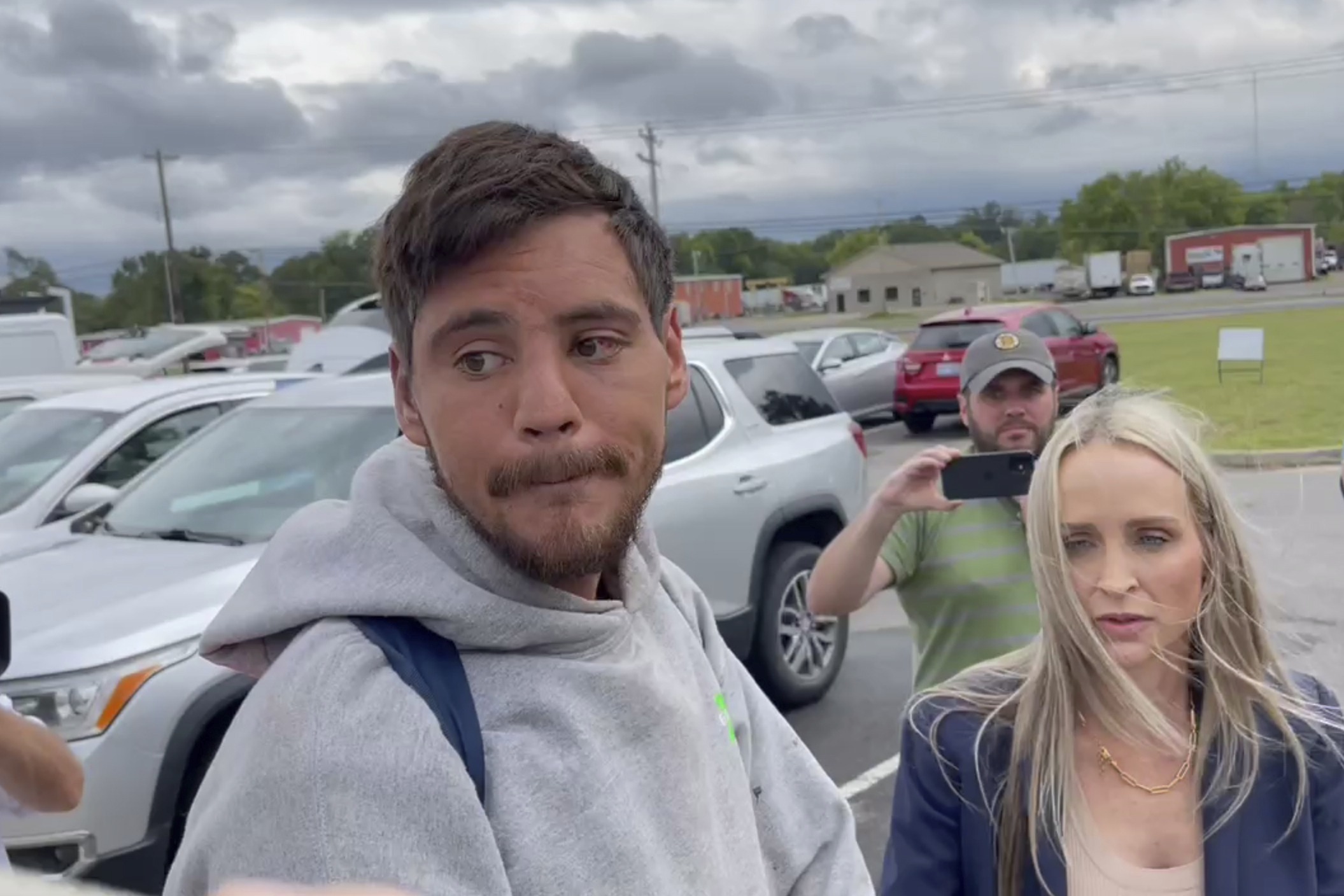 Randal Worcester departs from the Crawford County Justice Center in Van Buren, Ark. on Monday, Aug. 22, 2022. Three Arkansas law enforcement officers were suspended after a video of Worcester's arrest showed two of them beating the suspect while a third officer held him on the ground outside a convenience store. (AP Photo/Andrew DeMillo) 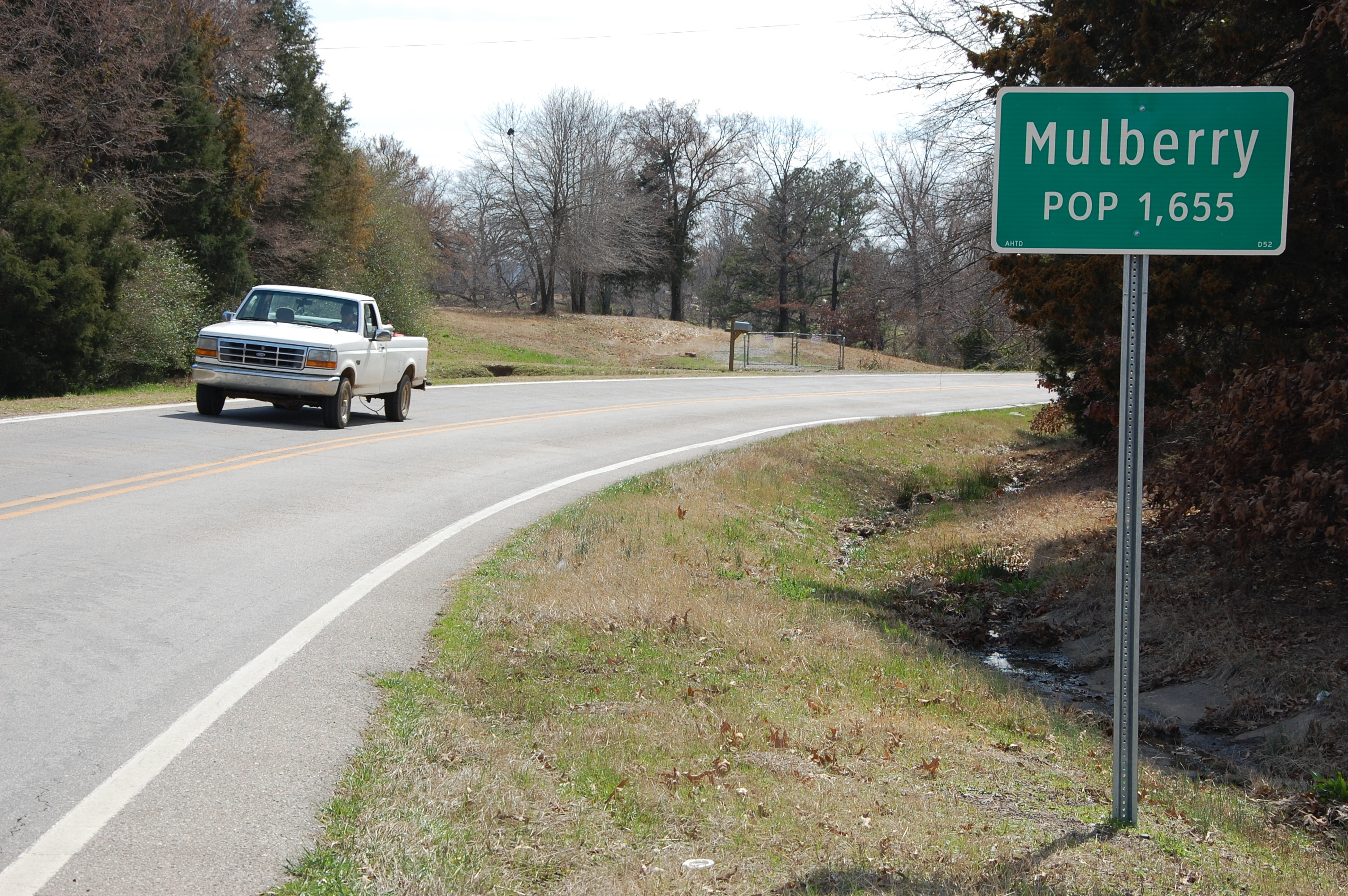