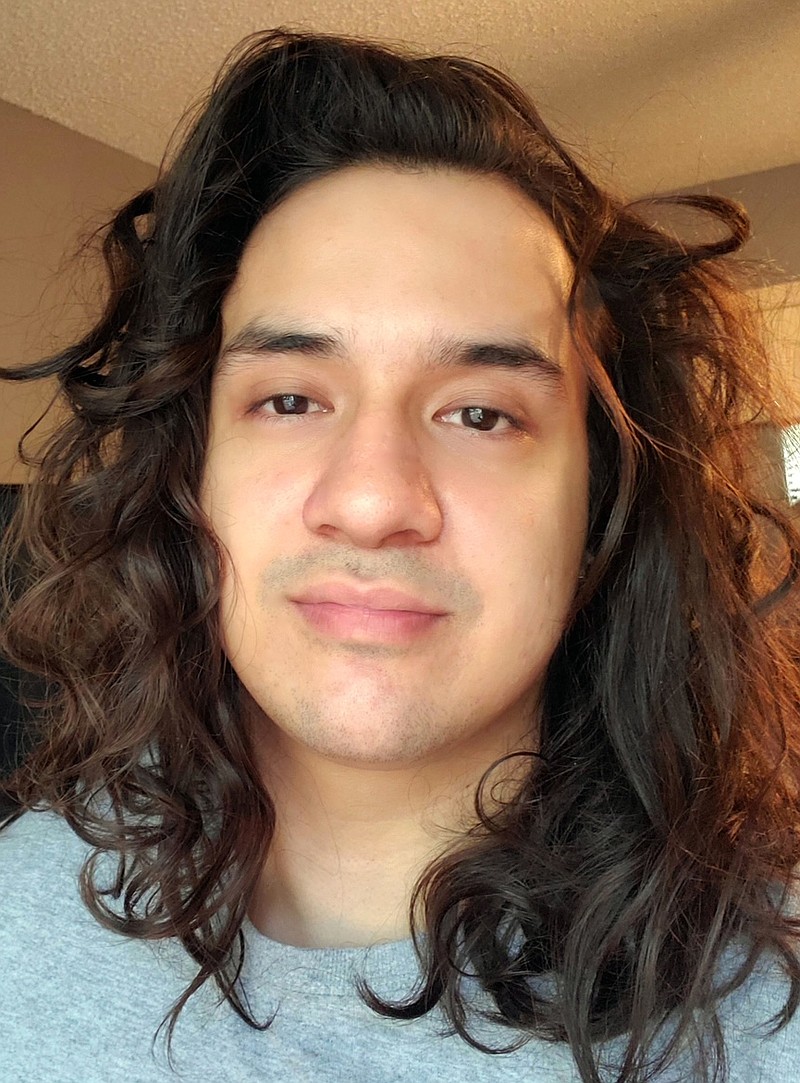 The regular open mic session for all poets, musicians, and storytellers will begin at 6:30 p.m. today. Correa will begin his feature set at 7:15 p.m., followed by another round of open mic. Admission is free and open to all ages. Masks are recommended. All are welcome.

Born on May 29, 1995, in Monteria, Colombia, a farming town that has since become a city, Correa's family emigrated to the U.S. in the early 2000s. "I've been here ever since. I have lived all over Florida; it's a crazy, beautiful state. I moved to Arkansas from Florida two years ago, and have been homesick but also home-averse ever since. Probably never moving back," he said in a news release. Correa currently lives in Little Rock and is planning a move to Chicago to "begin a new chapter of his creative life."

While growing up creating art and community in South Florida, Correa served as the director of the South Florida arts collective House of DRUMS, an acronym for Dancers Raw Underground Music Session, and won awards for general excellence as the editor-in-chief of the literary and arts magazine Panku, a student-run biannual literature and arts publication funded by Broward College. From Broward, Correa earned his associate degree in English, and bachelor's in Psychology, with a minor in Cognitive Science. "I quit pursuing a Master's because my heart wasn't in it," he said.

"I have a lot of hobbies, and my dream is to have the time and income to be able to pay attention to all of them. I'm gifted at competitive first-person shooters and have competed in semiprofessional and collegiate esports (which is playing video games for prize money). I'm in the intermediate stages of learning how to play chess. I like to longboard until my knees give out. I read a ton. I have a strong curiosity, so I end up deep diving into random fields and subfields, cultures and subcultures. I have a small collection of vinyl albums that are meaningful to me, and I live for great speakers and great music. I love wine. I love coffee. For a living, I work as a library assistant for the Central Arkansas Library system. Best job I've ever had," Correa said.

"My first memory of writing is a toddler me running back and forth to my cubby to look at my name written in my mother's handwriting in order to remember how to spell it. I wanted to show that I knew how to spell my name. I took pride in it. My next memory of writing is in ninth grade when I wrote a half-a - - -d series of poems and a throwaway play just to get them done as assignments for school. Both of those teachers singled me out, one privately and one in front of the class, to praise and encourage me to continue writing. The clearest and most significant memory is writing long, sappy, unstructured love poems for my high school sweetheart," he said. "What inspires me to write now? I try not to think about it. I just try to do it. If I feel like it, I'll do it. If I want to do it, but I don't feel like it, I won't think. I'll just wait. If I think, it all goes away. Easily frightened bird, the prelude of eureka."

Correa said he writes about "what I've learned and/or experienced. I write from emotion and instinct. I don't listen much to my thoughts or mind, but I instead listen to my body, how it feels and what it wants to say. I go by instinct more than anything else. A mantra of mine is 'No Think, Just Do.' I write about love, sex, ancestry, nature, memory, melancholy. Those are some words that could describe my subject matter. Intense feelings inspire me to write and so I write very often. I am intrigued by ideas on anything from evolutionary biology to South American colonialism. There's really so much."

"I've been in a steep mix of Caribbean, South American, European, and Asian influences since I was a kid. I'm happy to have had great friendships and relationships with men and women who've emigrated from all over the earth. I'm a poet raised by dancers. I learned about art, connection, and communication from dancers. The way they plug into their emotions is amazing, and the way they move their bodies is so freeing and so free of thought. So unstructured, so spontaneous, so passionate. I'm not sure how to word it, but I emulate the sensations and the instinct of a dancer when I write. I listen to my body and to my instinct. I have a strong oppositional reaction toward structure and neatness, tradition and authority, the clean and the sterile, the erudite and the soulless. I hate the hyper-cerebral. The expressionist and impressionist spirit is what has stuck with me. A wild coloring of one's spirit upon the earth," he said.

"And I can't stand living miserably to write well. That style needs to stay dead. Words on a page are not worth losing your life over. Writing miserable, depressed, existential poetry for 10 years is not healthy. Don't be Plath, don't be Bukowski, don't be Woolf, don't be Hemingway. Go to therapy! Many confuse anguish and sadness as the only reasons to write, and so that's all they write, and so there's no real release, just the cycling of the same energy. Too many of my artistic idols led horrible lives, suffered from addiction, treated others poorly, or even killed themselves. I wonder how many collective years may have been lived had talented artists learned to master their psyche as well as their craft."

"I have a desire to emulate David Bowie and continually reinvent myself. I'm so inspired by how he kept doing that. A little of it seeps into my writing as I try to explore many subjects and arrangements and styles and voices. I'd like to encounter that inner conviction and follow through with the creation of a new me every few years or so. Designing one's life is a pure expression of self," Correa continued.

"I am honored to feature at Wednesday Night Poetry, a place of Artistry and Goofiness. Severity and Laughter. Wine and Friends. Love and Kai. My friends Tracey and Emily introduced me. Emily pulled me into a ragtag group of poets and Tracey challenges me at our every meeting with a new exercise. Very grateful to have met them," he said.

"I don't think I have ever met a young man like Mau," WNP Host Kai Coggin said in the release. "He epitomizes the deep complexities of humanity in his intriguing persona, his humble nature, his exquisite writing. Every time he reads at the mic, I am awe-struck and compare him to the Masters, whose voices permeate his poetics. Just last week, Neruda's spirit poured from Mau's Spanish/English poem Azul/Blue. Mau is a quiet observer of life and the world's movement around his open heart. He sees and imbues himself in the reflections; a true artist. In deep diving into more about him, I looked into his former creative expressions (House of DRUMS and his editorship at Panku), and to say I am astounded by the level of beauty and inclusivity, community and spirit, resilience and pure art ... astounded would be an understatement. I will be sad to see Mauricio leave Arkansas for Chicago, but I know that he is destined for great things. He has the heart for it. That's what matters."