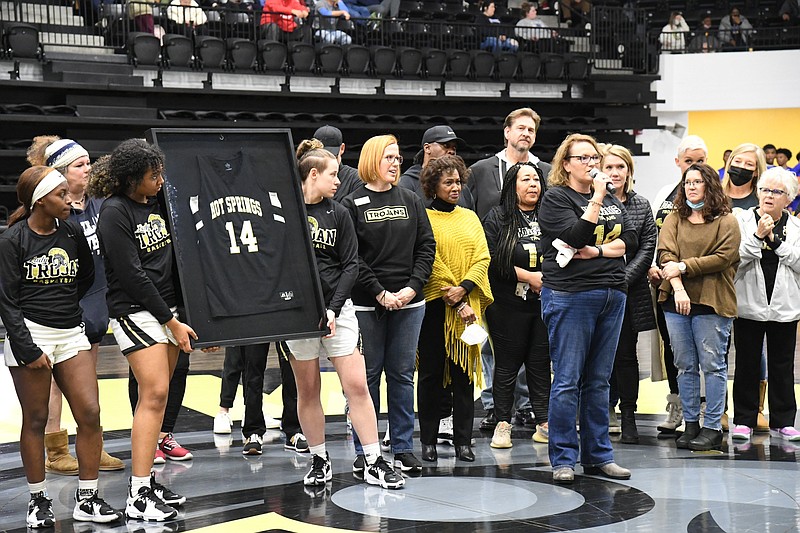 A 1990 graduate of Hot Springs High School, Hopson went on to play for the University of Arkansas, Grambling and played professionally overseas.

Hopson died in March 2021, and her classmates created the initiative to honor her with a jersey retirement. Although current Hot Springs athletic director Rodney Echols never met Hopson, he heard the legendary stories that surround the all-time great.

"Her classmates wanted to honor her in the right way, especially for a lady like her that was a pioneer for Hot Springs Trojans women's basketball back when she was in high school," he said. "She laid the foundation for dominating the sport at a high level."

King and her classmates approached another member of the class of 1990, Hot Springs School Board member Dino Lenox, to start the initiative.

"If you look at her accolades over the years with Hot Springs as well as the U of A, and at Grambling, I felt like as her friend and as our classmate just as an overall person -- she was an awesome person -- this was something we could do to honor her," King said.

King and her classmates had already wanted to retire Hopson's jersey, and when she approached Lenox she said it was the greatest thing to do to honor the Lady Trojan legend.

"It to me was bittersweet," King said. "I know that sometimes we need to learn to give our flowers before on this side, but to see it and to be able to go back, I was emotional for sure. But I knew that we were making her proud by honoring her in that way."

Echols and current girls basketball coach Josh Smith took a look at the scorebooks from when Hopson played for the Lady Trojans. The pair talked about whether a player like Hopson would ever come through Hot Springs again.

"When I look up in the book you see 40 points, 40 points, 35, 35, and I mean she probably averaged 30-something points a game that year in high school," Echols said. "I was just amazed at the output of points she was putting up during that season."

Although Hopson moved away from the Hot Springs area, her impact has always been felt in the Spa City.

"Later on down the road we find out she lived in the Chicago area and was a Division I college referee," Echols said. "A former basketball player of mine, Exavian Christon, had an opportunity to meet her at an AAU tournament that she was reffing in. That was pretty cool for a young man to lay eyes on Sha Hopson and somebody from the Hot Springs area, Hot Springs community, that bleeds black and gold in the Chicago area doing an AAU tournament."

After living in the Hot Springs area for 10 years, Echols has heard stories about just how good Hopson was on the court.

King, classmate Holli Patrick and others from the class of 1990 came up with the idea for a scholarship that will be awarded to a Lady Trojan in 2023 to honor Hopson.

"She was such a good person, very humble," King said. "If you didn't know her, you didn't know of her accomplishments. Even the students she mentored in Chicago had no idea she tried out for the WNBA and that she played overseas. When we do the scholarship, it needs to go to not just a superior athlete but an all around good individual."

King said Hopson is leaving behind a legacy of being a good person, good sportsmanship and being one of the best girls basketball players to ever come through Hot Springs.

"I think that if her time had been maybe 10 years after, she would have definitely been in the WNBA," King said.

King added that she hopes the retirement of Hopson's jersey will bring back a greater drive and love for the game at Hot Springs.

Echols emphasized the impact that Hopson's legacy will continue to have on Hot Springs athletes.

"It shows them that they are able to have the opportunity to go play at the college level -- the major D1 level," he said. "When you think about Sha, she played at Arkansas. She ended up playing at Grambling and she played overseas. It just allows our young ladies to see if they give it their all, keep their heads on their shoulders, they too can have the possibility or the opportunity to play at the next level."

The City of Hot Springs also gave Hopson a proclamation, and there will be a picnic held in her honor March 26 at Entergy Park.

With Hopson's jersey now retired at Hot Springs, both boys and girls Trojan athletes can continue to take inspiration from one of the school's true greats.