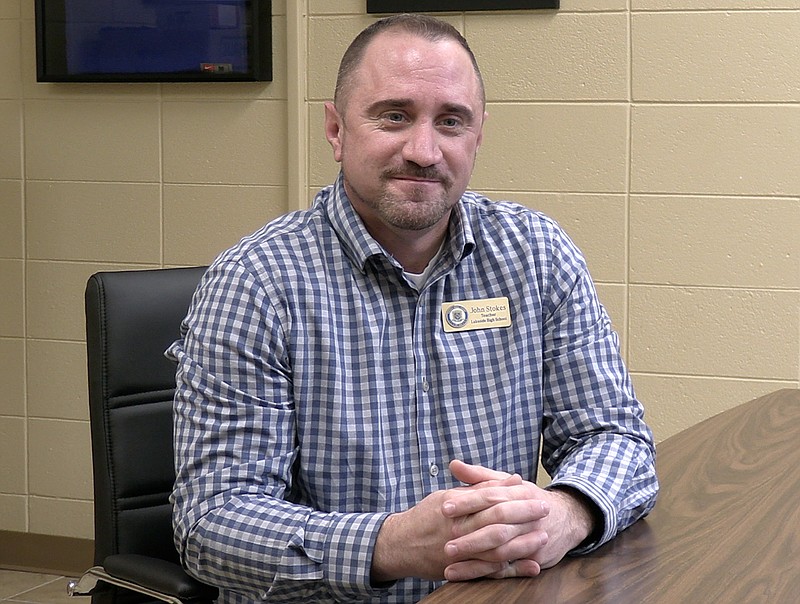 John Stokes, EAST facilitator at Lakeside High School, and recipient of the 2021 National Society of High School Scholars Educator of the Year Finalist award, talks with The Sentinel-Record Tuesday about the EAST program and receiving the honor. - Photo by Donald Cross of The Sentinel-Record

Lakeside High School EAST facilitator John Stokes was recognized on the international level this week when the National Society of High School Scholars presented him with the 2021 NSHSS Educator of the Year Finalist award.

The international academic honor society, co-founded by the great-nephew of Alfred Nobel in 2002, presents the annual award to educators who demonstrate "outstanding commitment to preparing students for success in college and in life," while modeling those practices both inside and outside of the classroom.

The society was no stranger to the teaching philosophy and learning methods employed by Stokes, as last May it presented him the Claes Nobel Educator of Distinction award, which made him eligible for this year's higher honor.

Stokes said Tuesday it felt "validating to what they do as an EAST program" to receive the honor, and that is something many educators do not get to experience.

"Usually in education, we only get to see it when the kids come back for their 20th reunion -- what our impact was -- so anytime that you're recognized for your efforts, I think it validates your purpose," he said. "We pour a lot into our kids here at Lakeside. We really go above and beyond trying to make sure that their experience is very well-rounded and that they get a quality education. So it felt really good to get recognized."

EAST, or Education Accelerated by Service and Technology, is a program many districts offer throughout the state, which combines elements of technology education, collaborative teamwork, and service learning into a model with an emphasis on student engagement.

"EAST is an environment where the facilitator's kind of a cohort to students, not just an instructor," he said. "We're hands-on with them. We help guide them. We question a lot. We try to steer some of their learning in an area where they can be successful. But they come to see it more as a symbiotic relationship than, say, a professor-student role."

Stokes, now in his 12th year of education, and ninth as an EAST facilitator, said a special dynamic exists between him and his students that sees them working together as one toward a common purpose, consistently being able to "bounce things off one another."

"Right now I've got a student that's building an outdoor classroom, and I'm right out there with the drills with them," he said. "So they can see my approach, I can see theirs, and sometimes we learn from one another, and that's when it's really fun. That's when they say, 'Hey Mr. Stokes, I've got a better way of doing that.' And then they'll show me, and then I'll adapt that, and transition it to the next class."

As part of his personal education philosophy, Stokes said he believes all children are diverse, and need a stimulating educational environment in order to truly grow physically, mentally, emotionally, and socially. This style does not come from the EAST structure, but rather from that of his own convictions and purpose.

He said education should be the safe haven where students can meet their full potential in a safe environment, while being challenged to take a leading role, and that the teacher is the guide to information, but not the sole source of knowledge.

"Students learn by doing, and need hands-on activities infused into the curriculum," he said. "The real role of education is to enable youth to grow as people to make educated choices and let their curiosity direct their futures. I think the hands-on portion's critical. I'm a veteran, and so I went through military training where that's how we learned. It was a process. That's what you do. This is how you overcome problems."

Of the many projects they do, he said he has had students remapping cemeteries, working on submersibles for the Arkansas Game and Fish Commission, and working with an aeronautics institution out of Little Rock in the construction of drones.

"I've had students here at Lakeside that have done everything from graphic art and design to advanced architectural theory using modern technology. So we expose them to everything here.

"I'm a constructivist teacher. I like process. I think process and performance is where it's really at with these students. It's a hands-on learning approach. The classroom should be messy nowadays," he said.

According to Stokes, students should have an opportunity to find out where their niche is, and even fail a little in their learning endeavors, but grow from that past failure. It is then they have good knowledge.

He said they try to establish an EAST environment where students select their own course of study, as well as their own projects and how they are going to come about.

Stokes said he feels this type of learning style gives the students a sense of empowerment when looking toward their futures and what they would like to accomplish one day.

"They love being able to dictate their course of study," he said. "They like being able to assign value to what they do -- whatever that value may look like. And sometimes, even if the project is not successful, the gains they get from the process that went into it, far outweigh anything that they could have gotten from a disclaimer saying 'yes this worked.'"

Stokes said he is thankful and loves the ability the Nobel Committee has to select teachers and recognize them. He noted that another educator in Arkansas was also recognized in the finalists honors.

"It gives that stigma of an 'Arkansas education,' kind of a pause moment when you recognize two educators in the same state that make the Top 10," he said. "For them to be able to orchestrate something like this, to bring attention to educators -- because the last three years have been hard with COVID and everything we've went through -- to be able to recognize the efforts of teachers is very important."